From firearms, DIY hacks, and dog license tags to majestic man manes of the American Civil War and Bob Ross (yes, that Bob Ross), we’ve covered some interesting subjects in 2019. Here are 9 of our favorite infographics, articles, and images of 2019.

Firearms were wielded by revolutionaries fighting for the very survival of our nation, they were strapped across the backs of our earliest explorers, and used to feed and protect frontier families. Brothers used them against brothers in the Civil War, they were carried across the vast western frontier, and they were the instruments used to defeat the Nazis and the Imperial Japanese in World War II.

Given enough time, oxygen, and water (moisture), an iron object will inevitably transform to rust and disintegrate. The longer rust is allowed to persist, the more it devours its host.Over the years, I’ve tried dozens of rust removal techniques; everything from good ole’ fashion elbow grease to harsh chemicals. Having restored hundreds of iron objects, I’ve settled on three inexpensive, non-toxic methods that have produced the best results.

Clovis points are quite possibly the most coveted point of Native American artifact collectors. Clovis points are the unmistakably-fluted (a leaf like groove emanating from the central base) projectile points associated with the New World Clovis culture of the Early Paleoindian period―which lasted for nearly 1,000 years, from 11,500 to 10,500 years ago.

I feel lower than a bow-legged caterpillar. Lower than a snake’s belly in a wagon rut. Lower than an ankle bracelet on a flat-footed pygmy. Just down right low. I’ve done the unimaginable; the inexcusable. My entire collectibles collection―the Civil War relics, antique bottles, Native American artifacts, coins and currency, and WW2 pieces―has been boxed away in the dark, inescapable confines of plastic storage containers and cardboard boxes. I’m moving. And I hate it.

Just off U.S. Route 50 in Herndon, Virginia, stands a non-descript warehouse that houses more than a thousand paintings created by one of America’s most recognized and beloved painters: Bob Ross.

Some have argued that art imitates life, while others say that life imitates art. Native Americans would have agreed with both positions. When the colonists first came ashore in North America, they observed Native Americans using mud, cattails, and other organic materials to craft imitations of ducks and other fowl. These decoys would attract live water fowl, which hunters would then capture or kill.

As new laborers arrived in Hawaii, an official from the sugar plantation assigned a unique number to each worker as they exited the ship. Pronounced “bong-go,” workers were given a tag made by plantation, usually of brass or aluminum, and stamped with their unique ’employee’ number.

As the original “collector” of dog tags, Owney became; and still remains, the unofficial mascot of the International Society of Animal License Collecting―a passionate group of collectors devoted to preserving the history of dog tags and generating interest in the hobby.

#1: The War Between the Beards

While the Civil War rewrote centuries old military tactics, introduced new and innovative weaponry, and forever changed how subsequent wars would be fought, it also brought us majestic man manes and glorious facial fur fashion. In his two-part series, Matt J. Michel, the journal editor of the “Proceedings of the National Institute of Science,” conducted a rigorous, quantitative analysis of the beards and facial hair bravely grown, and proudly worn, by the commanders of the North and South. 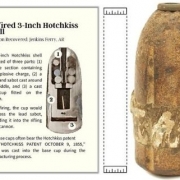 The War between the Beards
0 replies

What Makes Ammonites So Beautiful?
Scroll to top