While violence and destruction reigned supreme during the Civil War, the American Bible Society (ABS) waged another kind of war; a war for the souls of the fighting men. The ABS, along with other religious-based organizations, began to distribute pocket Bibles to both Confederate and Union soldiers. By December 1861, the ABS was printing and distributing approximately 7,000 New Testament pocket Bibles a day to soldiers in both armies.

Founded in 1816 by clergy, educators, and national leaders, the ABS aimed to share the Holy Scriptures with everyone, regardless of their societal status. The organization’s first foray into supplying military men with Bibles came in 1817 when they donated 65 Bibles to the crew of the USS John Adams. That marked the beginning of an ABS program that provides Bibles to our armed forces. As of today, the program is still in effect.

At the outbreak of the Civil War, the New York-based American Bible Society was faced with both a perceptual and logistical challenge of supplying Bibles to both sides of the conflict. Despite their position of neutrality in the war; and a genuine desire to provide Scriptures to all of God’s children, their New York ties evoked skepticism among the people of the South. Southerners apparently didn’t want anything from the north, even the Holy Scripture!

For shipments that did make their way south, many of them were intercepted by blockaders and confiscated as contraband by Union forces. To circumvent the blockades, the ABS shipped Bibles to the Maryland Bible Society and the Washington City Bible Society; who would in turn, smuggle the Bibles behind the front lines in the South.

Pocket Bibles in the South

To combat the issues faced by the ABS, there were a few Bible Society organizations located in the South that shared the same mission as the ABS. Two such organizations, the Nashville Tennessee-based Bible Society and the Augusta, Georgia-based Confederate States Bible Society, printed and supplied Confederate troops with pocket Bibles. Such editions are extremely rare, with very few known to exist today.

Despite the difficulties of supplying the South with Bibles, a fair share still made their way behind the front lines. A fantastic example is a pocket Bible given to; and carried by, none other than Nathan Bedford Forrest. According to the inscription and date on the inside page, Forrest most likely carried the Bible in the Battle of Tupelo, Second Battle of Murfreesboro, Second Battle of Franklin, Battle of Nashville and while fighting Wilson’s Raiders throughout Alabama and Georgia. 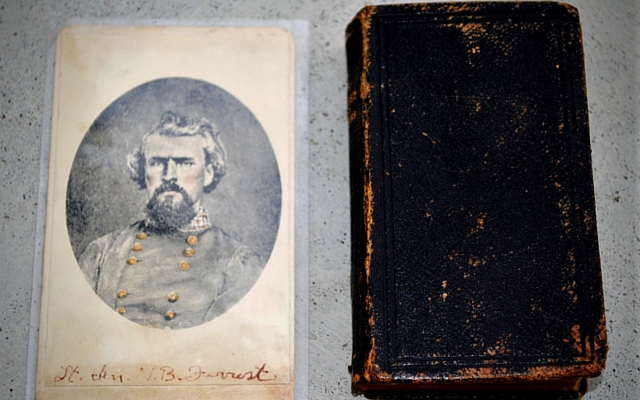 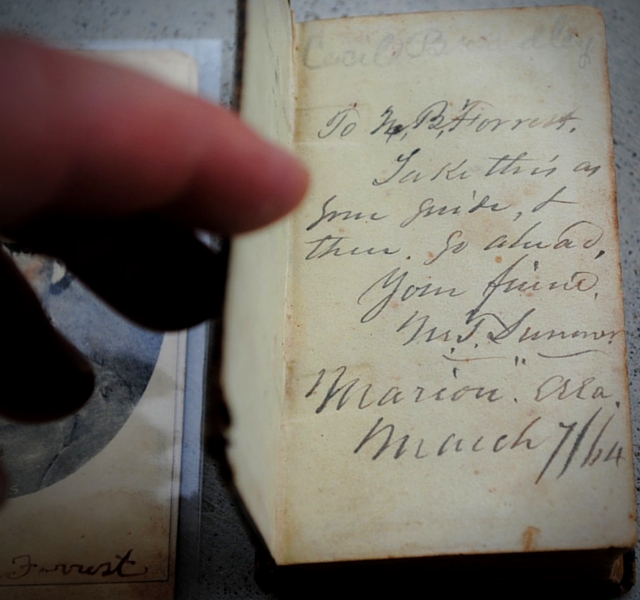 Playing cards, pocket journals, and the “Soldier’s Testament,” were some of the most common personal items carried by soldiers of both armies. Soldiers leaned on these items to get them through the boredom of camp, time away from home, and the horrors of battle.

Such horrors created a religious awakening throughout the nation and the ABS helped fuel its growth. The North and South interpreted the Scriptures differently and looked for passages that would bolster their ideals regarding the institution of slavery, states’ rights, and even which side they thought God supported. Abraham Lincoln addressed this during his second inaugural address in 1865, stating “Both read the same Bible and pray to the same God, and each invokes His aid against the other. It may seem strange that any men should dare to ask a just God’s assistance in wringing their bread from the sweat of other men’s faces, but let us judge not, that we be not judged. The prayers of both could not be answered. That of neither has been answered fully.”

When the Civil War concluded, the ABS had distributed 5,297,832 Scriptures to soldiers and civilians in the North and the South.

Have Metal Detector. Will Travel.