Most notably collected for their remarkable ornamental form, ammonites, the predatory mollusks that resembled squid, have long captured our fascination.

A card-carrying member of the molluscan class Cephalopoda (“head-feet”), these cephalopods had eyes, tentacles, and spiral shells. Most closely related to today’s octopus, their shells look more similar to that of a marine mollusk.

Beautiful ammonite shells have been collected by people for ages. During medieval times they were believed to be snakes that had been turned into stone. Quick witted entrepreneurs scooped them up, fitted them with carved heads, and sold them to people going on pilgrimages.

In his encyclopedic Naturalis Histoira, Roman author Pliny the Elder (c. 79 AD) called fossils of these animals ammonis cornua, or “Horns of Ammon,” due to the shells likeness to the spiraled horns perched atop the head of the Egyptian god of the sun and air, Amun.

In addition to their collectability for aesthetic reasons, various species of ammonites have also proven to be instrumental to biostratigraphy, a branch of geology that correlates and assign relative ages of rock strata by using the fossil assemblages contained within them. As such, ammonites are referred to as an index fossil.

To understand the beauty of a cut and polished ammonite shell, we must first dive into a quick anatomy lesson.

The ammonite’s shell was divided into chambers separated by thin walls, or partitions known as septa. As the ammonite grew, its body moved forward in the shell to a new living chamber, secreting septa behind it. The growth and movement of the creature added new chambers to the shell, creating walls that strengthened the shell and prevented it from being crushed by external water pressure. In turn, those walls (septa) formed elaborate suture patterns.

The sutures were on the inside of the shell, where the septa met the inner wall. The beautiful patterns would have been hidden behind the protective, outer part of the living animal’s shell. These suture patterns are used to identify the different species of ammonites.

The actual ammonite only lived in the last chamber, the body-chamber. The earlier chambers were filled with gas or fluid which helped the ammonite regulate its buoyancy and movement, much like a submarine.

As previously noted, suture patterns are used to identify different species of ammonites, and can be categorized by three major pattern types:

When an ammonite died, it drifted to the bottom of the ocean floor, where it became embedded in sand or silt. As the shell became buried in the mineral rich sediment, the sand and silt acted as a cocoon, both protecting and preserving the shell.

RELATED ARTICLE: Is it legal to collect, metal detect, or dig for artifacts?

As the layers of sediment grew in depth, pressure pushed water into the shell’s chambers and eventually crystallized it into the rock-like fossil we find today. During this process, the mineral laden sediment not only preserved the shell, but it also enhanced the colors; to iridescent greens, reds, yellows and rare blues and violets.

Here’s a look at a few beautiful specimens. 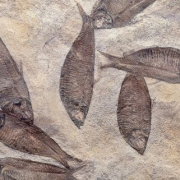