“Reader, did you ever eat a mussel? Well, we did, at Shelbyville. We were camped right upon the bank of Duck River, and one day Fred Dornin, Ed Voss, Andy Wilson and I went in the river mussel hunting. Every one of us had a meal sack. We would feel down with our feet until we felt a mussel and then dive for it. When we got to camp we cracked the shells and took out the mussels. We tried frying them, but the longer they fried the tougher they got. They were a little too large to swallow whole. Then we stewed them, and after a while we boiled them, and then we baked them, but every flank movement we would make on those mussels the more invulnerable they would get.”

“We tried cutting them up with a hatchet, but they were so slick and tough the hatchet would not cut them. Well, we cooked them, and buttered them, and salted them, and peppered them, and battered them. They looked good, and smelt good, and tasted good; at least the fixings we put on them did, and we ate the mussels.”

“I went to sleep that night. I dreamed that my stomach was four grindstones, and that they turned in four directions, according to the four corners of the earth. I awoke to hear four men yell out, ‘O, save, O, save me from eating any more mussels!” – Sam Watkins, First Tennessee Regiment, “Co. Aytch”

Such colorful and satirical descriptions of military life during the Civil War are perfectly scattered throughout Sam Watkins’ personal memoir, “Co. Aytch.” Watkins and the 1st Tennessee spent the better part of the spring of 1863 camped along the Duck River in Shelbyville, Tennessee.

MUST READ: The Battle of Dead Angle

As a student of history, relic hunting pioneer, and a big fan of Watkins’ stories, it’s no surprise that Larry Hicklen has spent decades metal detecting the camps of the 1st Tennessee in search of items lost or left behind by the army.

Approximately 30 years ago, Larry uncovered quite possibly the favorite relic that he’s ever found while searching the exact camp that Watkins writes about in Chapter 7 of his memoir. And no, it wasn’t one of the 69 Confederate belt buckles that he’s found! Instead, it was a lead filled, ornate, silver hatpin, identical to that worn by Watkins – as featured in his book. 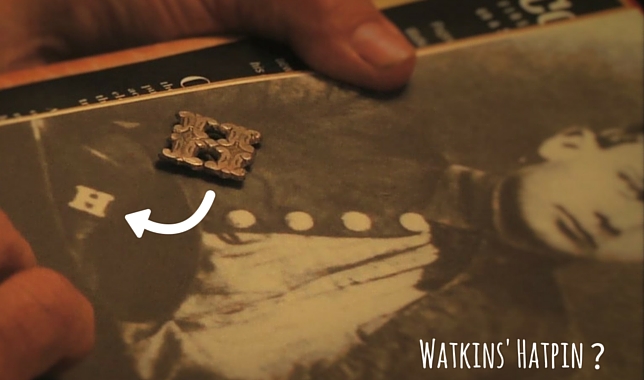 Lead-filled, silver hatpin found by Larry Hicklen in a 1st TN camp along the Duck River.

As Larry explains, the camps located along the Duck River have been some of the most productive camps to hunt for two reasons. First, they represent some of the longest periods of troop encampments, with the Confederate army positioned along the line from January to June 23, 1863. Second, the same time period also represented the height of Confederate supplied materials that were accessible to the army. So simply put, Larry hunted the area where they had the most supplies and stayed the longest.

Still an active researcher and relic hunter, Larry also shares one his newest research methods that has led to the discovery of many more Confederate relics. And they say great relic hunters keep their secrets secret! Check out Larry’s video to learn more…