It was there, on the morning of May 9, 1864, that some of the most severe and savage fighting of the war took place, with much of it being waged by hand-to-hand combat. The battle lasted a little more than an hour, involved two future presidents in Colonel Rutherford B. Hays and Major William McKinley, and concluded with a mortally wounded Jenkins and a Confederate retreat. With the rebel defenses weakened, Crook went on to destroy the Virginia and Tennessee Railroad at Dublin, Virginia, severing the last rail line connecting Tennessee to Virginia.

Of the nearly 10,500 battles, skirmishes, and military actions of the Civil War, the Battle of Clyod’s Mountain stands alone in one regard: its Confederate and Union commanding officers, Jenkins and Crook, had the most combined facial hair of any opposing commanders in the entire war!

The envy of every hipster worth their salt, Civil War beards have seen a resurgence in popularity. So much so, that an entire book was written on the hairy subject. Appropriately titled, Badass Civil War Beards, the book features more than 100 of “…the Civil War’s most stupidly awesome (and awesomely stupid) examples of facial hair…”

Despite vast historical records of the conflict, and exhaustive research conducted by historians, authors, and academia, no one has ever attempted to answer the toughest and most meaningful questions of the Civil War:

But at last, a courageous and noble researcher embarked on an amazing journey to answer those, and many more hard-hitting questions. In his two-part series, Matt J. Michel, the journal editor of the “Proceedings of the National Institute of Science,” conducted a rigorous, quantitative analysis of the beards and facial hair bravely grown, and proudly worn, by the commanders of the North and South.

The War between the Barbates

In Part I of his analysis, Michel analyzed and presented data on the facial hair of 95 Confederate commanders and 123 Union commanders that took part in the major battles of the Civil War.

Applying a “Beard-to-Face” ratio (i.e., divide beard area by face area), Michel classified the commanders by the style and quantity of their facial hair, and determined which side of the conflict had the most beard.

Part II, which is available here, carefully examined the relationship between facial hair and battle outcomes.

We’ve carefully studied the analysis in its entirety and crafted several illustrations that bring this amazing follicle research to life.

Now on to our next project: convincing Jake Gyllenhaal to play John Bell Hood in a theatrical biopic of the complicated and much maligned Confederate General. 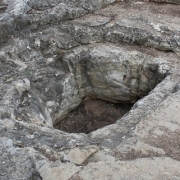 A Box That Bears His Name