As Hurricane Matthew battered the coast of Charleston, South Carolina, it dredged-up a few reminders of a previous and more violent affair. While walking the shoreline on Folly Beach Island, a local resident discovered 16 Civil War artillery shells that washed ashore in the wake of Matthew. News outlets reporting the story used words like “uncovered, discovered, unearthed, and revealed” in their headlines. Sadly, such words only told half the story.

For those that are devoted to the preservation of Civil War history, the other half of this story is all too predictable. As soon as authorities were alerted to the discovery, the fate of those artifacts was sealed. Maj. Eric Watson, a public information officer with the Charleston County Sheriff’s Office, proudly stated that his guys and “…members of the U.S. Air Force explosive team used a small amount of C-4 to detonate the cannon balls right there on the beach.”

Historical artifacts that survived the Civil War; and more than 150 years of exposure to time and elements, were blown to smithereens instead of being carefully preserved, studied, and shared with the public.

Surprisingly, the National Park Service; whose stated mission is to preserve “…unimpaired the natural and cultural resources and values of the National Park System for the enjoyment, education, and inspiration of this and future generations,” also embraces this destructive practice.

In 2008, employees of Petersburg National Battlefield Park discovered a 44-pound, 8-inch diameter mortar shell when clearing a path for a future park road. They immediately called the Virginia State Police Bomb Squad, who wasted no time in hauling the artifact to the Petersburg city landfill, where it was destroyed with explosives. Those entrusted with the “unimpaired” preservation of our history, ordered the destruction of an important Civil War artifact, in a city dump nonetheless!

In September, 2014, employees at Richmond National Battlefield Park discovered an unexploded 12-lb artillery shell within the moat of a Confederate fortification known as Fort Gilmer. The park historian determined it was a live shell, possibly used by Confederates as an improvised hand grenade. According to the park’s “live ordnance policy,” the Henrico Police Bomb Disposal Team was summoned to remove and destroy the artillery shell – which they did. 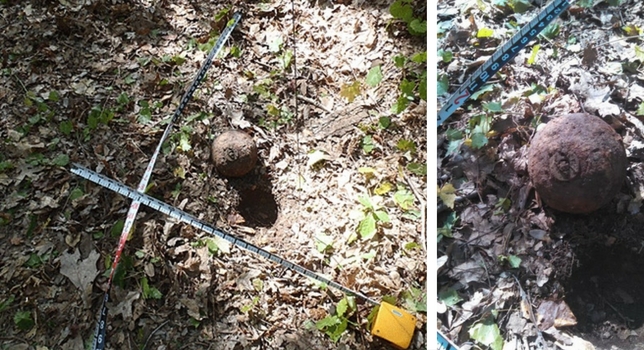 Unexploded 12-lb artillery shell within the moat of a Confederate fortification known as Fort Gilmer.

In May, 2015, a construction worker uncovered a 14-pound James Rifle artillery shell in Prairie Grove, Arkansas. The construction worker turned the shell over to the city with the hope that it would be preserved and put on display at the Prairie Grove Battlefield State Park. City officials saw things differently and turned the shell over to the Bentonville Bomb Squad for destruction.

Not all of those entrusted by the public to honor and preserve our history are in favor of such absolute and destructive policies. When commenting to an AP reporter, Alan Thompson, Museum Registrar at the Prairie Grove Battlefield State Park, was dismayed.  Thompson, who believed the shell should have been preserved for educational purposes, said “These things are disarmed every day. They’ve been disarmed since the last one was fired in 1865…. If it gets destroyed then that’s information that is gone that we’ll never have.”

When pressed about an official policy for handling live munitions following the Prairie Grove incident, a spokesman with the U.S. National Park Service, Jeffrey Olson, confessed that the NPS does not have a nation-wide protocol in place. Olson said the “practices in the field are to turn to bomb disposal personnel,” but aren’t required to do so. Olson’s position was further supported by the NPS spokeswoman for Gettysburg, Katie Lawhon, who sided with the city. Lawhon told Arkansas 5News, “We make the assumption that these are potentially explosive, that they’re unstable and that they’re dangerous, and we call the military. There’s a nearby unit that works with unexploded ordinance and they usually come to the site and detonate it in place.”

Still not convinced, Thompson responded that “We’re just missing pieces of the puzzle; every little piece just adds more information for our understanding.” The disagreement between these professionals highlights the murkiness of positions and official protocol on this subject.

Despite the lack of an official position on how to handle live Civil War ordnance, the NPS and its National Battlefield parks such as Richmond, are quick to remind us that: “These battlefields have been dedicated to those who fought and died here. Please treat them respectfully.” Their regulations go on to say: “All natural, cultural, and archeological resources are protected and may not be removed and/or disturbed.” The irony is just too obvious!

Much of the angst around this issue can be traced back to the 2008 death of Virginian Sam White – a Civil War buff who had previously disarmed an estimated 1,600 shells for collectors and museums, according to the Associated Press. Several parks, such as Petersburg and Richmond, changed their policies after White was killed while trying to disarm a 9-inch, 75-pound naval cannonball. While attempting to restore the shell, it exploded, killing White and blasting a chunk of iron shrapnel through the front porch of a home more than a quarter of a mile away. This incident, quite possibly, made White the last casualty of the Civil War.

With an estimated 1.5 million artillery shells and cannonballs fired during the Civil War, and as many as 20 percent of those being duds, there’s a good chance that many more “live” shells will be found in the future. Which begs the question; what should be done with them?

Big Iron Man has the Answer

The Big Iron Man knows what to do. In the extraordinary article, “Shell Hunter,” published in Garden & Gun Magazine, a man who prefers to go unnamed discusses why he seemingly risks life and limb rendering Civil War artillery shells and cannonballs inert. Although the man’s personal collection consists of shells that are worth thousands of dollars apiece, like most artifact collectors, he’s doesn’t hunt, preserve, and collect shells for the money. He’s just sick of hearing about American history getting blown to bits by the people and organizations sworn to preserve it.

The Big Iron Man goes to extraordinary lengths to render artillery shells safe and to preserve them for future generations. Once he receives a shell, he immediately disarms it using a contraption that features water, an improvised blast shield, and a drill press. Once the last remnants of caustic materials are flushed out of the shell, it’s put through electrolysis – a type of alchemy crucial in the preservation of metal.

The entire disarmament and restoration process is quite fascinating. While not “Big Iron Man,” Steve Phillips helps disarm and restore a 20-pound Parrot Shell recovered by Britain Lockhart, producer of the popular YouTube channel, Depths of History.

I wonder if Big Iron Man would recommend smoking a cigar while hovering over a live shell?

Most relic hunters who search for, recover, and preserve Civil War artillery shells, are extremely careful in their adherence to laws. However, due to the quagmire surrounding the handling of ordnance deemed “live,” these relic collectors find themselves in a no-win situation. To legally transport a live artillery shell, a federal permit is required. To receive a live artillery shell, you not only need a permit, you’re also required to have a federally inspected storage magazine. If a relic hunter finds a live shell, they risk violating the law by transporting it or they risk the shell (and its historical value) being permanently destroyed by a bomb squad.

Artillery restorers like Big Iron Man navigate the spider web of laws, permits, and federal inspections by neither transporting live shells nor storing them on their property.  As Big Iron Man says in the article, if any one of the shells that he’s disarmed were to have been “…picked up by an EOD unit, they would have just blown it up. To me and a lot of other people, that is simply destroying history.”

The Battle of Dead Angle
0 replies