Having just welcomed my beautiful daughter into the world, I’m sitting in our hospital room amazed by all of the “baby tech” and how much more advanced it is from even 6 years ago when our first daughter was born. This got me thinking; how did mothers of long ago care for their newborns without all of this stuff? I was especially curious about feeding practices. My curiosity sparked an interesting odyssey into the evolution of breastfeeding, its substitutes, and baby bottles. Shall we begin?

Wet Nurses & the Physician from Ephesus

For many mothers; and for various reasons, breastfeeding isn’t an option. Surely not a new issue, I began to wonder what a mother would have done centuries ago if she was unable to breastfeed. In 18th century B.C., Babylonian mothers turned to wet nurses. The practice was common, especially among the wealthy, in Ancient Rome, Egypt, and Greece.

Soranos, a 2nd century A.D. Greek physician from Ephesus, was an early pioneer in the science of women. Several of his works survive today, most notably his dissertation on gynecology. In his writings, he describes the preferred wet nurse: “She is between 20 and 40 years of age, honest, even-tempered, pleasant, in good health, has a good complexion, is of average size; her child is less than two months old, she is clean and her milk is neither too clear nor too thick.”

It was thought that a wet nurse would pass her qualities, or her depravities, onto the child through her milk. For those reasons, a wet nurse was carefully vetted before she was selected by a family. This careful selection process put a high demand on “approved” wet nurses and was widely practiced between the 10th and 16th centuries across all levels of society.

As world populations began to grow between the 18th and 19th centuries, so did the demand for wet nurses. Unable to keep up with the demand, families turned to breastfeeding substitutes based on milk from animals such as cows and goats. But how was that milk given to the infant?

Got Milk? How About Cow Horn?

Infants were fed animal milk, as well as a clear porridge made from milk and bread or flour, served in animal horns or similarly shaped receptacles with cloth teats. In addition to horns, containers fashioned from pottery were used to feed infants. Terracotta vessels fitted with a pouring spout and handle were used from the 9th century B.C. to the 4th century A.D. Glass “gutti” bottles were introduced during the 1st century A.D. These bottles were equipped with a very slim spout that enabled milk to pour drop by drop. These time periods have been substantiated through the discovery of such containers in Greek and Roman tombs of young children. 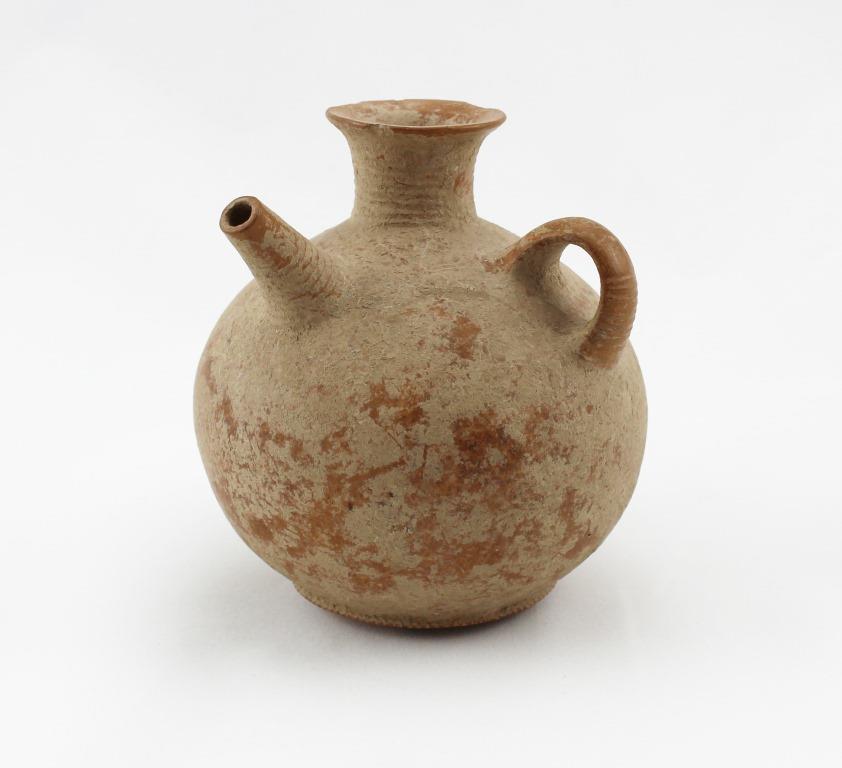 Clay; flared -out top; spout at right angle to small handle; no inside extension of spout; from northern part of Iran in a place called Mazandaran by the Caspian Sea; approximately 2000 years old. Circa 100-200 B.C. 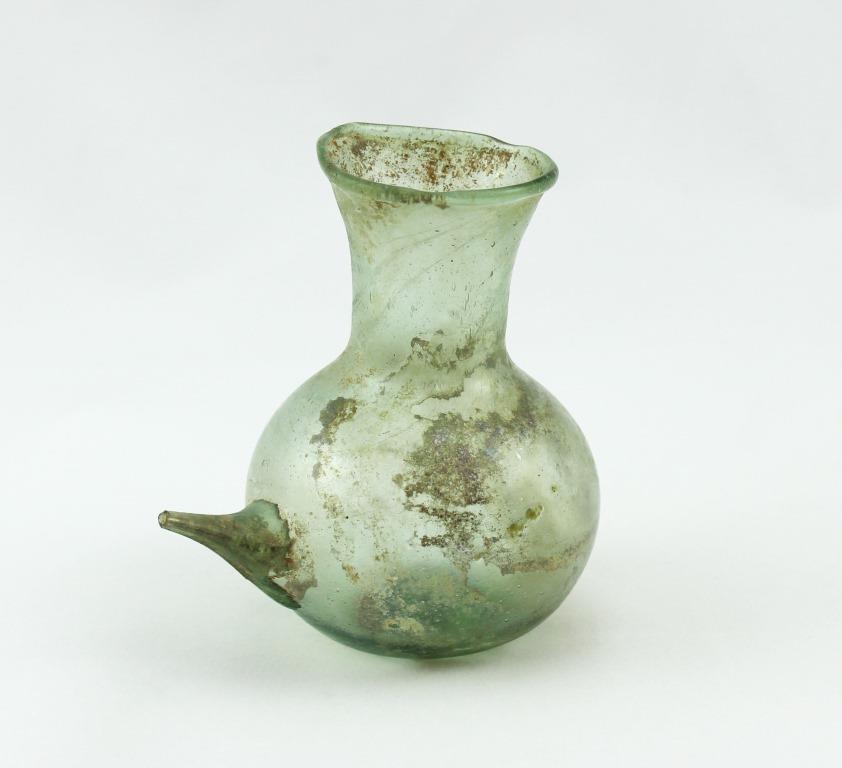 Ilberg, Johannes: The transmission of the gynecology of the Soranos of Ephesus.

With the arrival of the 16th century, nursing containers began to take the shape of an actual bottle, replacing pottery containers and animal horns. Doctors began to develop artificial feeding techniques based on animal milk, and new delivery devices shaped from a variety of materials such as wood, pewter, and glass were introduced.

The containers were tall, shaped more like a bottle, and featured a nipple-shaped piece of fabric or sponge on the tip. Such material not only simulated the shape of a nipple, it also regulated the flow of milk and prevented the child from damaging their gums during feeding. 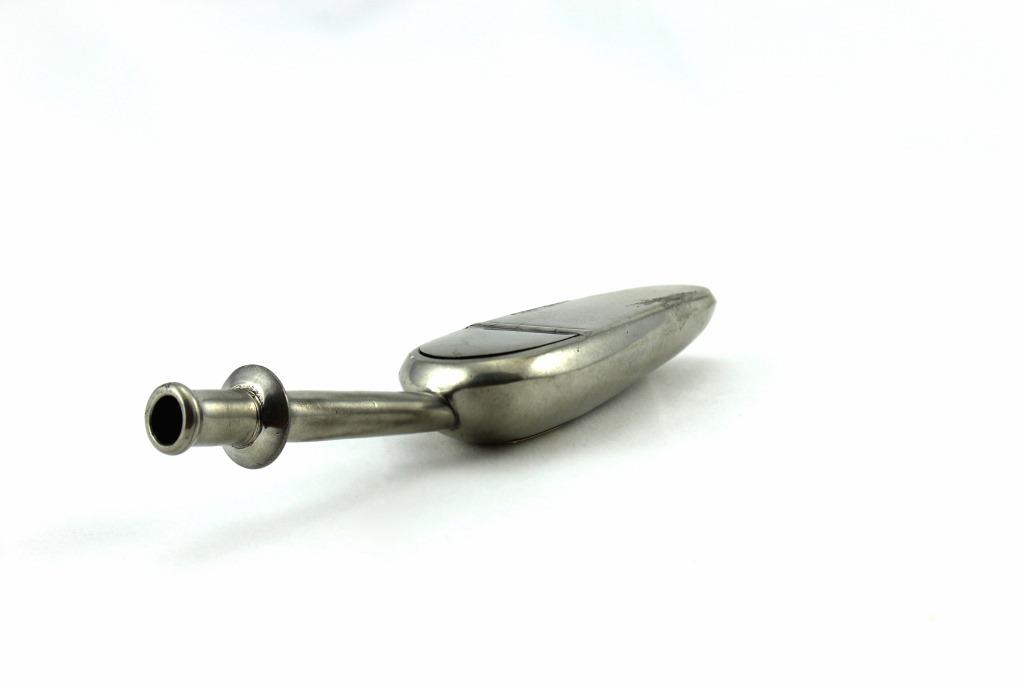 From the 18th century, bottle manufacturers began to place more emphasis on comfort, ergonomics, and cleanliness. Designs ranged from flat-shaped and clog-shaped bottles to the banana-shaped blown glass bottle that allowed a nursing infant to remain in an inclined position during feeding.

Not every new bottle design had the desired effect. During the 19th century, bottles made of pewter were common, despite the high rate of mortality they caused. Overtime, milk would break down and absorb the metal and deliver a toxic concoction ingested by the nursing infant. 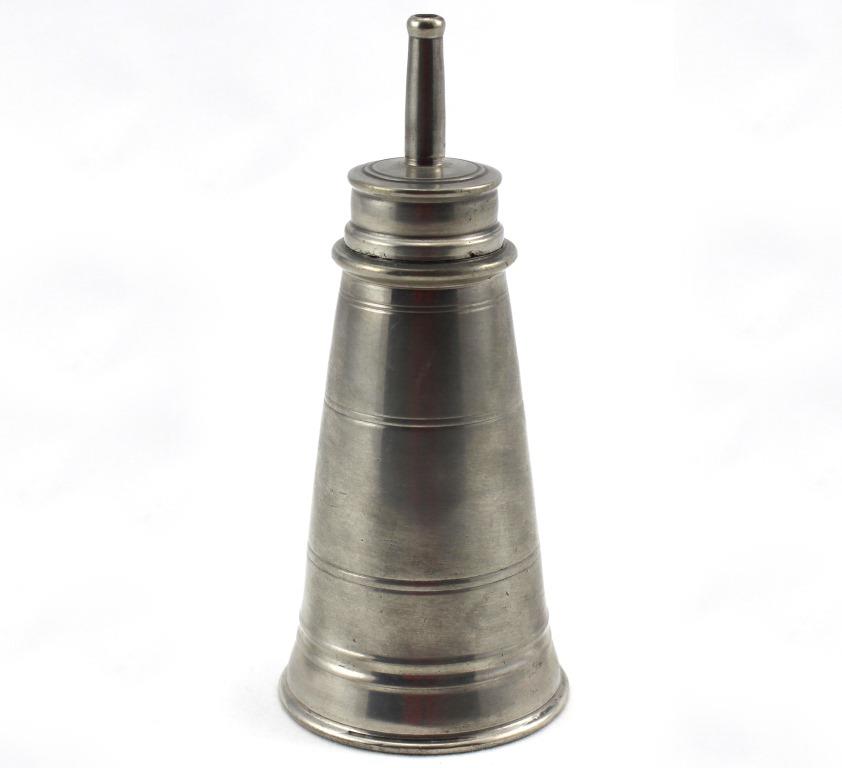 In America it was Charles M. Windship, of Roxbury, Massachusetts, who patented the first glass nursing bottle in 1841. According to his patent filing, he designed his bottle to deceive the nursing infant: “The great objection to the common nursing bottles is that it is exceedingly difficult to teach most infants to use them, and with many it is altogether impracticable. The peculiar formation of my lacteal remedies this objection and enables me to practice a useful deception, inducing the child to think that it derives its nourishment directly from the mother, as it feeds in the natural position.” 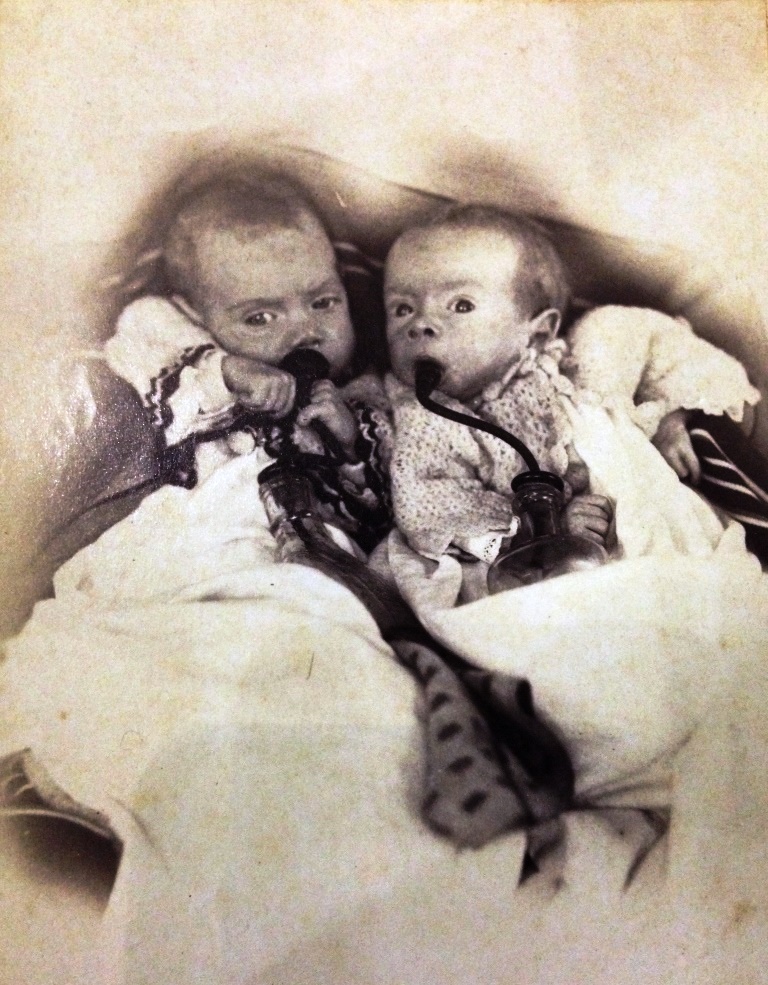 Another interesting variant was introduced in 1860; a glass flask equipped with a rubber tube. Initially regarded as one of the most practical nursing bottle on the market, it was banned in 1910 as the “killer tube” proved to be a petri dish for bacteria. 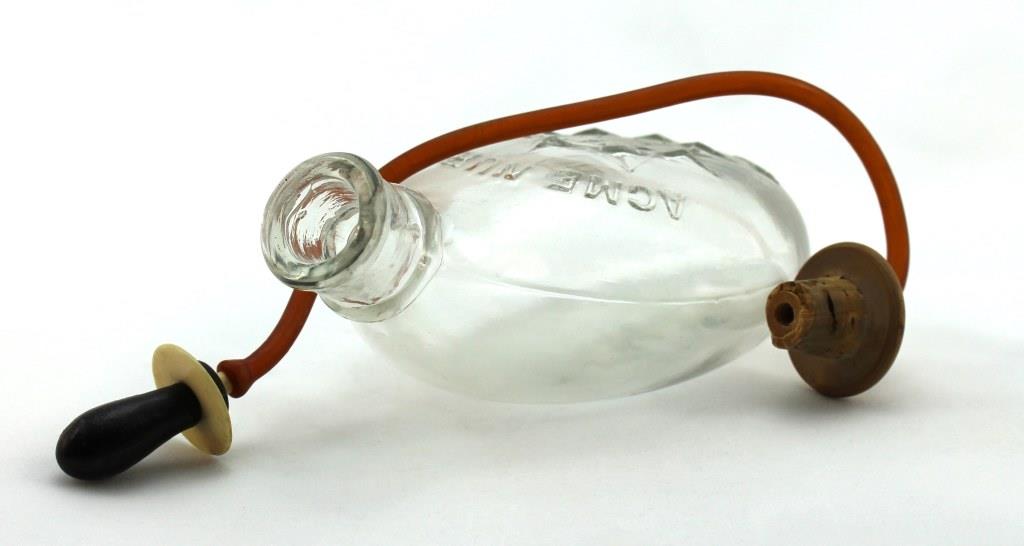 Glass continued to be the material of choice for bottle manufacturers. With the advent of molded glass and the heat-resistant Pyrex®, bottle producers began to mass produce straight-shaped feeding bottles, equipped with rubber teats and a wide neck for easy cleaning.

While advancements were being made in bottle production, advancements were also being made in the fields of pediatrics, pharmaceuticals, and gastronomy. Henri Nestlé created milky flour for cow’s milk-based infant feeding and in 1908, Maurice Guigoz invented powdered milk, heating the milk under vacuum at low temperature. Guigoz’s invention eventually led to the introduction of the first liquid maternity milk packed in small bottles (1969).

By the end of World War II, there were 230 patents for nursing bottles – most of which are of interest to baby bottle collectors. However, it was the French that are credited with the invention that shaped the way baby bottles are made today. The French manufacturer Remond molded rings on the neck of the bottle so the teat could be secured on the bottle without it having to be touched.

When the 60’s rolled around, most bottles transitioned from glass to polypropylene, giving manufacturers more “fun” design options. Popular cartoon characters and other themes could easily be screen printed onto the bottle, which marketers surely appreciated.

The evolution of bottles and feeding accessories continues today. Walking down an infant feeding aisle of a Babies R Us® will illustrate just how many options are now available. Choose from glass, plastic, and silicone feeding bottles. You might choose the curvy bottle that will be extra comfortable for Mom to hold or try the bottle with handles to develop the baby’s motor skills. Need a nipple? No problem. Try the silicone, anti-colic, standard nipple in size one; or you may want the latex, anti-colic, orthodontic nipple in size two, three, or four. Need formula? We’ve got that too! May I interest you in cow milk protein-based, soy-based, or protein hydrolysate formula? Would you like that powdered, concentrated liquid, or ready-to-use? 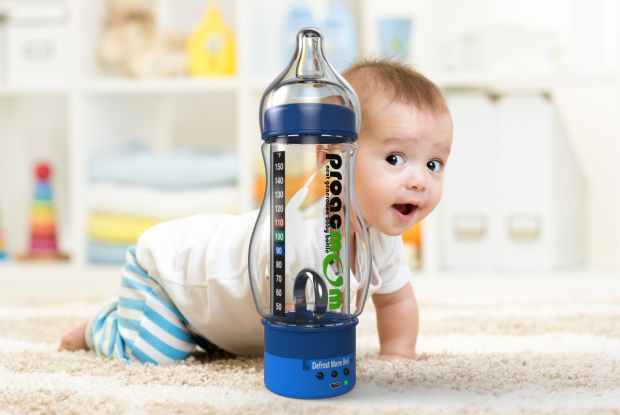 There’s a niche following of nursing bottles within the larger bottle collecting community. The American Collectors of Infant Feeders caters to these collectors through publishing information “…pertaining to the feeding of infants throughout history.” They also do a great job at promoting the hobby through various publications and tradeshows. If you’re interested in seeing more images of baby bottles, check out the University of Nebraska Medical Center Digital Commons page. Many of the images used in this article derived from this awesome resource.

I’m just thankful that my daughter doesn’t have to drink donkey milk through a cow horn!