Q. How would you describe yourself?

A. First and foremost, I would say that I’m an historian. To be great at the hobby of recovering Civil War relics, you have to have a passion for it–researching and discovering all of the nuanced, intricate historical details. I think most everyone in this hobby is an amateur historian in their gut.

I have a passion for Civil War history and I only focus on that time period. My degree is in chemistry; and I liked it at the time, working for both Textron and DuPont for a while. However, there’s a difference between liking what you do and having a passion for what you do.

It’s a blessing if you can figure out what it is that naturally grabs you to the point that you have to hold yourself back from being totally consumed by it. You’re just fortunate if you find yourself in a spot like that. Over the years, it has amazed me to know people who’ve found their passion but are unwilling to figure out a way to make a living at it.

Q. When did you determine that you could make living by doing what you love?

A. Originally, I just wanted to have a hobby shop. In the early years, I was still working my day job because I wasn’t sure I could actually make a living doing the relic business full-time. After nearly four years of working both, I began to realize that if I learned the relic business well enough, exercised good business practices, and handled some of the better stuff, that a good living could be made.

The company I was with at the time let me work part-time after four years. That was important for the growth of my business. Staying on part-time allowed me to provide health insurance for my family and it covered other expenses as well. This way, the money made in the relic business could be reinvested in the business. By the sixth year, I realized that working part-time was preventing me from growing my relic business further; so after six years, I transitioned the hobby to a full-time business.

To make a good business out of this you have to learn it inside-out and upside-down. But again, if it’s something you love and are passionate about, that’s not hard to do. 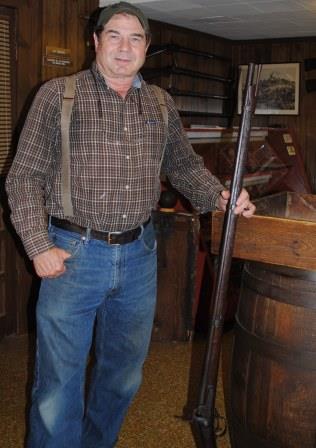 Q. How did you transition from being a relic collector to running a relic business?

A. That was the hardest thing for me in the beginning. It required a change in mentality. When you’re purely a personal collector, you want to keep everything. It was probably the single most difficult hurdle I had to cross in order to make a living at it. I would just tell myself; and become a full-blown believer, that my personal collection wasn’t my only collection. By helping others grow their collection, I was helping grow our shared collection–a collective collection if you will.

At first, it was painful as hell to sell something really nice. It was like pulling teeth not to head home with that cool artifact, because every nice thing you see you want for your own collection. Once I was able to overcome that, and develop friendships with people that were growing their collections, I really felt like I was helping contribute to one big collection.

When I see some of my recovered buckles on display at a show or somewhere else, they’re just an extension of my collection. When I help someone find a specific piece they’re looking for to round out their collection, it’s a sense of accomplishment for me in that I helped further “our” collection. That’s what got me over that hurdle.

To take it even further, none of us are eternal. Even if you recovered everything in your collection, you have to realize that someone else other than you will be its future caretaker.

Q. Being that your shop is at the doorstep of the Stones River National Battlefield Park, how would you characterize your relationship with the park service?

A. It’s great. And it’s great because I play by the rules, respect what they do, and have built good relationships. It’s interesting though; on the whole, they don’t know much about artifacts. What they do know, is how to administer a park.

When visitors come in with tactical questions or artifact questions, they just send them to me because they know I can tell them what they have or where their ancestors’ unit was on the battlefield. As neighbors for nearly 40 years, you just have to get along. I’ve seen a dozen or so Superintendents come and go, some I liked better than others.

Q. Do you sense that a degree of friction exists between archeologist and the metal detecting/relic collecting communities? If so, why do you think it exists?

A. I think there are several reasons for this. Most metal detectorists and relic collectors are amateur historians, and some archeologists perceive that as a threat to their profession and educational pedigree. I have more fun with the guys next door [Stones River National Battlefield Park] about this. We’ve been friends for a long time and when we’re hanging out, drinking coffee; I’ll ask, “Which of these reference books did an archeologist write? Wait, none of them!”

The facts are that amateur historians have authored almost every reference book on the subject. People from our community have contributed more long-lasting historical reference data than any other group that exists to the perpetuity of learning about the war and the equipment used. For the archeologists that are open-minded, guess what reference books are on their shelves? Our books! And there are many out there that will acknowledge that.

But unfortunately, that’s not to say that every relic hunter or collector plays by the rules. We would be naive to think that is the case. There are people that do things that they shouldn’t. Not every lawyer is good and not every doctor is good. Unfortunately, the same holds true for our hobby as well.

However, I strongly believe the contributions we’ve made to the telling of our history have done more good than bad. Without our community, those reference books wouldn’t exist. We wouldn’t know as much as we know now without them. When done right, a cooperative effort helps everyone.

A. That’s a hard call. I like the general reference books like those written by Charlie Harris. The early ones by Stan Phillips are amongst my favorites. Crouch’s books are really nice too, because they cover a little of everything and they’re photo intensive. When I need a more in-depth reference book on a particular subject, I reference works by Albert, Tice, and Mullinax to name just a few.

If I had to make a call on which book is the most helpful to relic hunters and collectors, it’s going to be the McKee and Mason bullet book. Reason being, for every 10 identifiable artifacts you’ll recover, 9 of them will be bullets. And with that book, you’ll be able to firmly identify exactly what you’ve recovered.

Really though, there’s a place for all of them. But for a beginning collector, there’s no point in buying a Mullinax buckle book. You’re not going to need a Confederate buckle book for a while!

Q. Who is your favorite historical figure from the Civil War?

A. Being from where I am, it’s got to be Nathen Bedford Forest. He was a natural born military genius and had a warrior’s spirit that you have to admire. The feats that he accomplished were almost superhuman in the face of having little to no formal military training. But there are lots of them. In the East, how could you not be a Stonewall fan? But over here; for me, Forest is the guy.

Q. What about your least favorite historical figure from the Civil War?

A. That’s tough. [Long Pause] I would say Bragg and Hood. However, how can you look at John Bell Hood who had to be tied to the saddle, with one leg, and only one arm that worked; I mean how can you not salute him? Although there is some evidence that suggest he was drugged two-thirds of the time in order to treat his pain, I don’t agree with a lot of his decisions. Franklin for example, his tactics were insane and Forest told him as much. But looking at what he sacrificed and his undeniable devotion to the cause, it’s hard to say that one could despise the man. However, he shouldn’t have been in the position he was.

Now Bragg, he’s a guy that had abilities but he wasn’t a finisher. Time after time, he would almost refuse to accept that he had the enemy on their heels and never finished what he started. Even at Chickamauga the Confederate leadership tried their best to convince him that the Union forces were on the run back to Chattanooga. He’s probably my least favorite.

Bragg didn’t treat his men right either. They thought he was too hard on them and even cold-hearted. I could see why they would believe this. He ordered the execution of deserters and when he evacuated Shelbyville and Tullahoma, instead of giving his men the shoes and clothes they so desperately needed, he chose to burn his supplies. Bragg viewed his tactics as necessary for discipline in a time of war. I don’t know how I feel about that. I understand that as a leader in a time of war, you have to have discipline amongst the ranks. If you don’t, you may lose your whole army. In retrospect, it’s just hard to point fingers.

A. Company Aytch; Or, a Side Show of the Big Show – you just can’t beat that.

A. I guess it would have to be Rafael Eledge [Shiloh Relics]. I mentored him while he attended school here and helped him start his store. Now to see him carrying the torch, that’s cool.

This interview with Larry Hicklen, founder and owner of Middle Tennessee Civil War Relics, was conducted and condensed by Will Adams.

Winner of the Great Relic Giveaway

The Civil War on a Stamp
Scroll to top