Q. When did you fall in love with this hobby?

A. It started with the Centennial Anniversary of the Civil War. I was 10 years old in 1961, and 14 years of age come 1965. Those are real formative years for a young boy. During the Centennial, the newspaper had a big section every week, and living history presentations were also a big deal. I attended a few of them, and as a 10 to 14 year old, it made quite an impression. Those were the years when I said “you know what, this stuff is cool.”

When I moved on to High School, I started to learn about metal detectors. My friend and I purchased one and put it to work. In those days, every place you went had never had a machine on it. Now keep in mind, the detectors weren’t that good, but the relics were so plentiful that a forked-stick would’ve worked!

Q. What was your first metal detector?

A. My first attempts at metal detecting were made with what was called a Heathkit Metal Locator. The company would send you the parts and you would build it. It wasn’t much, but it was enough to start with. What I would consider my first “real” metal detector would have been a Metrotech. It worked okay. It had a little depth to it; but again, relics were so prolific in those days that plenty of them were just under the surface. If you didn’t find 50 to 100 artifacts on a day’s hunt you weren’t trying! On many occasions, I would lay my machine down to dig a signal and it would scream back at me with another signal where I had laid the coil down. The relics were just that abundant in those days.

During the 1960’s, 70’s, and the first half of the 80’s, relics were everywhere. In those years, public opinion of the hobby was that it was a novelty for people who were into history – rescuing and preserving artifacts. Also, the relics back then didn’t really have that much monetary value. For example, the first CSA belt buckle that I recovered, I got $500 for it. At the time, that was big, big money. I ended up buying it back a few years ago for $2,500 – that was a little negative return I would say!

Q. What do you hunt with these days?

A. I bounce back-and-forth between the White’s MXT Pro and the Fisher F75. Both are really great machines. On a site that holds relics, and you know how to use one of those machines, you’ll find something. With that said, there are so many good machines out there like Garrett, Minelab, and others. Most machines available today are really good if you learn how to use them right.

Q. What do you perceive to be the biggest threat to the hobby of relic hunting?

A. I believe the future of the hobby will be different than what the past has been. This is mostly due to urban sprawl and the erosion of personal connections. It’s not just the big cities; small communities are experiencing it as well. There are now many more people, houses, subdivisions, businesses, roads, and other things that are eating up the camps that were once miles away from the city. Urban sprawl works like a cancer that slowly makes its way outward, covering up sites as it spreads. Even in outlying areas where farms once stood, they’ve been subdivided and sold. Now to hunt one camp you have to get permission from 4 or 5 people. It’s just all different now.

To get permission these days, you can’t just knock on the door expecting to know the person on the other side. In the past you could, because everybody knew everybody. But now, it’s not likely because they’re probably from Michigan or California. Now more than ever, it’s just hard to find common ground.

Q. Have you changed the way you approach gaining access to new properties?

A. Yes. To improve your yes/no ratio, you have to research the property owners as well–where do they go to church, where did they go to school, where do they work, where do their kids play sports, etc. You do that until you find a shared connection that may be able to make an introduction on your behalf. You’re far better off having that person introduce you to the property owner versus making a cold call. This way, they already know a little about you, they’ve had time to think about it, someone else has vouched for you, and they’re expecting your visit.

This approach helps to lower the property owner’s natural reservations and goes a long way in reassuring them that you’re a good guy who just loves history. Now when you go and knock on their door, the reception is more like “oh, you’re that history guy Johnny called about.” It’s not “who are you and what are you doing here?”

If you’re cold calling around here anymore, you’ll only succeed about 20% of the time. If you use the intermediary approach, you’ll get permission somewhere north of 50% of the time. However, this does require a few more steps that will take extra time and research. I think it’s worth it though, because it’s almost impossible to reverse a no; and once a decision has been made, the umpire isn’t changing the call!

Q. What’s your approach when you visit a property owner?

A. It isn’t cool to show up to the door dressed like you’ve just escaped from the homeless shelter! And don’t show up dressed like you’re ready to go dig. That doesn’t work. I would suggest dressing as if you’re going to work–presentable and well-kept. Also, meet them when they’re expecting you. 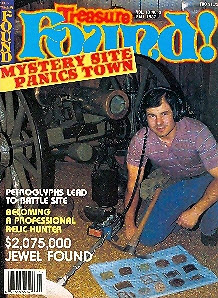 Introduce yourself; tell them a little more about you, how long you’ve been in the hobby, and your love of history. If you have research on the area, share it with them. Let them know why you think there may be some bullets, old gun parts, or buttons on the property. Always speak in terms of historical items that are minor in nature. Never talk in terms of lost money. You don’t want to give the impression that your intent is financial gain. Now everyone likes finding a rare item, but the facts are that those of us who hunted in the early days, and found lots of items, would have made more money working at McDonalds. Especially after you consider the time and expense associated with research, travel, metal detectors, and other things related to the hobby.

Q. Do you know of anyone who metal detects purely for financial gain?

A. I honestly don’t know of anyone, over all these years, whose sole interest in recovering artifacts was purely for financial gain. And if there was someone, they quickly figured out that there are better ways to make money. People are in this hobby for the love of history and the thrill of recovering and preserving it.

Now there are people, for various reasons, that do sell artifacts. They may have a health problem, the transmission in the car needs to be replaced, they’re behind on bills, etc. When I was getting my relic shop going in the early days, if I recovered duplicates, I would keep a few and sell the rest. For example, I hit an area in Nashville where Hood’s sharpshooters were, and I dug like 130 Whitworth bullets. I kept 10 to 15 and the rest helped me finance the acquisition of new inventory, pay light bills, and do other things related to getting my relic shop up and running.

Q. Has technology had an effect on the way you approach research?

A. It has made it easier to access some of the things that were difficult to find in years past. A lot of research and reference material is now at your fingertips. However, the basic approach has remained unchanged. You still have to do your homework in order to identify places to hunt. But now thrown into the mix is property ownership research. Technology definitely helps with that.

For the modern day relic hunter, I would say there are now two phases to research. Phase one is doing the research that leads you to a specific area or property. Phase two is doing the research on the property owner so you don’t get turned down. And the permission process can be the most frustrating part about it; completing two months of research unraveling a site, only to get turned down. And if you get turned down, you can’t verify if your research is right or wrong which can really stall your efforts, and on some occasions, totally eliminate locating a new site.

Q. How do you think the hobby will change in the future?

A. I think the organized paid hunts are going to change out of necessity because the sites are not going to last much longer. You can only pound the same property for so long until all the relics have been recovered. However, I think there will be a new viable business for this type of hunt. Let me explain.

I believe we’ll start to see organized hunts conducted on historical sites with period relics, supplemented by tokens that are attached to killer items such as a Springfield Musket or a CSA buckle. I also see this type of hunt blossoming due to permission issues. The era of one’s collection constructed of only relics they’ve found is coming to an end. So I think people who enjoy the hobby, and the comradery that comes with it, will gravitate towards this type of hunt.

Q. Is there one relic that has eluded you all these years?

Q. If you could pick only one person to hunt with who would it be?

A. That’s a tough one. It would have to be one of the early pioneers of our hobby. Talking about pioneers, I actually got to hunt early on with Reid McKee [McKee & Mason]. He lived close by and was up in the years at the time, but I would load him up and we would go hunting. It was fun because you would mostly dig a slew of bullets. And with Reid, when you were done hunting, every bullet you dug would have to be examined under the microscope from every possible angle. It was fun seeing him scrutinize each and every bullet. It was fun spending time with him. He was just crazy about every little detail.

Q. What still gets your adrenaline pumping?

A. I love Confederate brass, be it a button or a plate. There’s no feeling like the one you get when you turn back the dirt to see a corner of a CSA rectangle. Your skin becomes flush and your heart jumps right out of your chest when you see one of those hooks sticking out. If you could bottle that rush, cocaine would go right out of business!

This interview with Larry Hicklen, founder and owner of Middle Tennessee Civil War Relics, was conducted and condensed by Will Adams.