“Colonel Woodward did not weigh more than 110 lbs, had long curling hair flowing over his shoulders. His very small legs were stuck in high cavalry boots reaching above his knees; and on which, was an enormous pair of Mexican spurs. He had a cavalry saber that was much too long for him and an army pistol attached to his belt; which contrasted with his size, looked like a small cannon. His grey pantaloons were stuffed in his boot, while a dark grey hunting shirt with a narrow brimmed corduroy slouch hat completed his apparel. All this, with an extremely dust-begrimed face, made a picture ridiculously amusing.”

That’s an eyewitness description of the man that Colonel Rodney Mason of the 71st Ohio had surrendered the city of Clarksville, TN to on August 18. 1862. After being paroled by his Confederate captors, Col. Mason asked Col. Woodward for a favor. Col. Mason wanted to pay to have Col. Woodward’s picture taken. Why you might ask?

In this video, John Walsh of FortDonelsonRelics.com shares a terrifically humorous tale of Col. Woodward of the great Clarksville Caper!

A Tragic Ending for Colonel Woodward 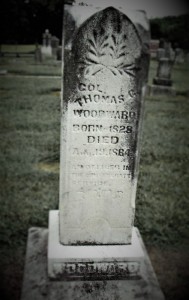 After being disciplined and losing his command, Col. Woodward returned to his hometown of Hopkinsville, KY, vowing to liberate it from Federal occupation. By most accounts, a drunken Col. Woodward rode into town with heroics on his mind. Commanded to halt as he entered the city, he stopped his horse, raised his pistol, and took aim at a figure in a nearby window. Just as soon as he drew a bead on his target, a volley of lead rained down on him from all directions. Four bullets riddled his body. Moments later, the Colonel was dead.

Paul Fuller, a policeman, and member of the Home Guards, claimed credit for killing the Colonel. In an ironic twist, a few years later, Fuller himself was gunned down and killed near the exact spot where Col. Woodward fell.

The Forgotten Brigade of the Civil War
Disclosure: RelicRecord.com participates in Amazon Services LLC Associates Program, and other affiliate advertising programs, designed to provide a means for publishers to earn fees by linking to Amazon.com and affiliated sites.