With Super Bowl 50 upon us, we got to thinking about historical NFL memorabilia that made its way to auction. From coveted Super Bowl Championship rings to game-worn jerseys, helmets, and game-used footballs, we pulled together a quick list of items whose auction prices made headlines.

In 2015, SCP Auctions set the world auction record for a Super Bowl Championship ring. They sold the famed New York Giants linebacker’s Super Bowl XXV ring for a whopping $230,401. The 6-3, 237 Lbs., future NFL Hall of Famer Lawrence Taylor helped lead the Giants to a 20 to 19 victory over the Buffalo Bills in Super Bowl XXV. 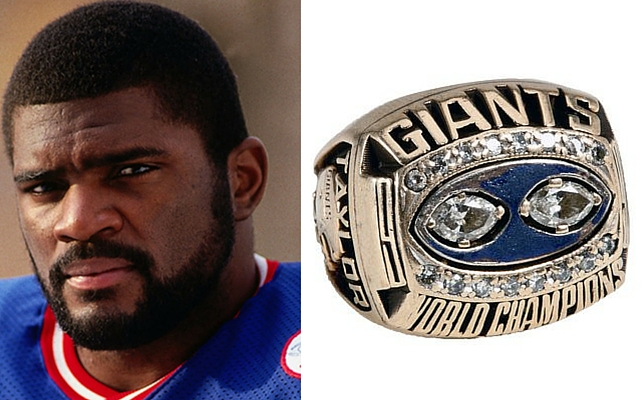 It’s no wonder that this impressive ring carries the title of the largest Super Bowl Championship ring ever made. After all, we’re talking about the ring finger of “Refrigerator” Perry! The ring size measured in at a whopping 25. To put that in perspective, a common ring size for a “common” man is somewhere between a 5 and 7. 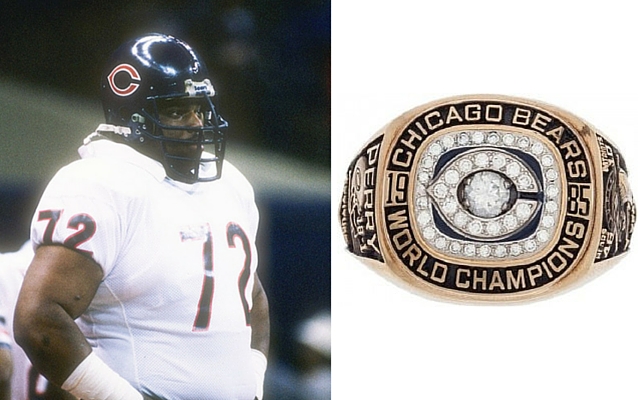 After being passed between multiple owners, the ring came up for auction in July, 2015. The winner of the super-sized ring paid a hefty sum of $203,150.

Originally belonging to William F. Hilgenberg, an ownership member of the Colts, this ring represents the “Greatest Game Ever Played.” The Baltimore Colts beat the New York Giants with an Alan Ameche touchdown run in sudden death overtime. 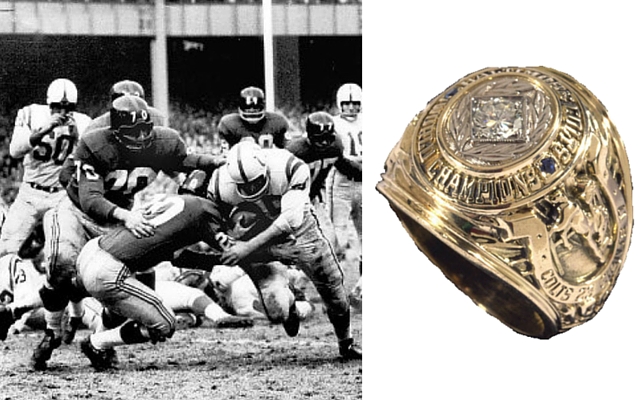 Still regarded as one of the most important games in the history of the NFL, it was the first game nationally televised. The ring sold in 2014 for $35,000.

NFL Hall of Famer James Langer is considered one of the greatest NFL Centers to have ever played the game. Known for his tenacity and quick-blocking ability, he was the anchor of the Dolphin’s offensive line during the 1970’s and helped lead the 1972 Miami Dolphins to the only perfect season in NFL history. 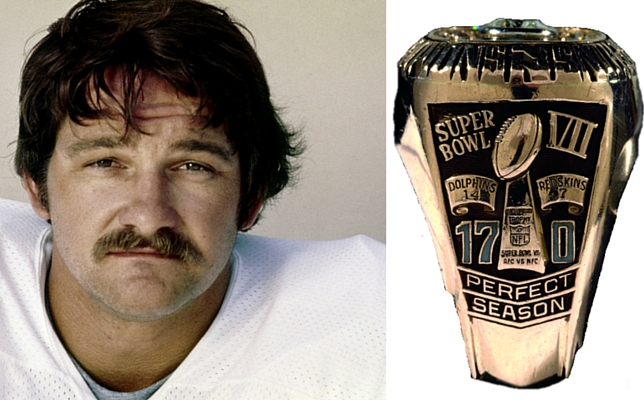 A chance to own a ring worn by a Hall of Famer, who played a key role in an unmatched, historic season was too much for someone to pass up. In 2015 this ring sold for $32,500.

Sammy Adrian Baugh is quite arguably the most versatile player in NFL history. “Slingin’ Sammy” is largely credited for incorporating the forward pass into offensive plays. Playing his entire career with the Washington Redskins, he also masterfully played three positions: quarterback, defensive back, and punter.

In the 1940 NFL Championship Game, Baugh’s Redskins took a historic and good ole’ fashion butt whipping, losing to the Chicago Bears by the score of 79-0. He had his revenge in 1942, defeating the Bears 14-6, due in large part to his ability to pin the Bears deep in their own territory with his punting ability. 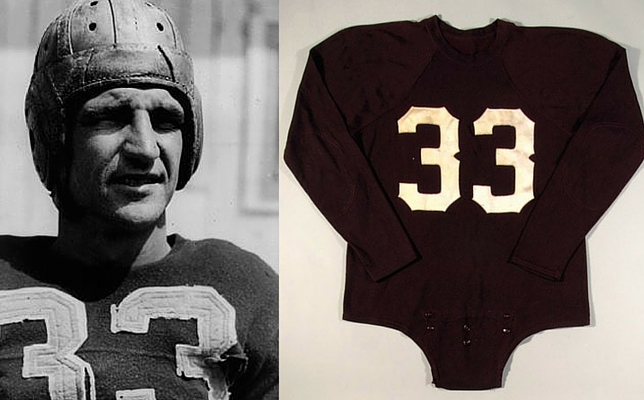 During the 1943 season, playing the three aforementioned positions, Baugh led the league in passing, punting, and interceptions. Baugh was inducted in the inaugural Pro Football Hall of Fame class of 1963.

“Johnny U” goes down as one of; if not the greatest, player in NFL history. Cut by the Pittsburgh Steelers in 1955, Johnny Unitas signed as a free agent with the 1956 Colts and the legend was born. His on the field accomplishments were just jaw dropping gaudy: 10-time Pro Bowl selections, 5-time AP All-Pro selections, 4-time NFL MVP, 3-time Pro Bowl MVP, 2-time NFL Championship winner (before the Super Bowl), 1-time Super Bowl Champion (Super Bowl V), NFL 50th and 75th Anniversary team member, and Pro Football Hall of Fame Inductee in 1979. 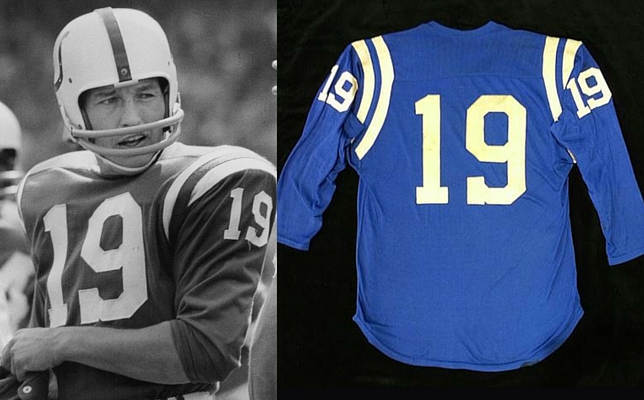 In 2015, a Unitas jersey came up for auction. Given to the seller’s father by the Baltimore Colts Equipment Manger inside the Colts locker room, the jersey sold for $90,000.

Taken in the first round (6th overall) of the 1957 NFL draft by the Cleveland Browns, James “Jim” Brown punished would-be defenders for the next 9 years. Many football historians refer to Brown as a “BOAT” – Best Of All Time. It’s hard to argue that sentiment when you look at what he accomplished in only 9 years as pro before walking away from the game at age 30.

Those records are truly amazing when one considers the era in which they were set. Four of his first nine seasons consisted of a 12-game schedule. His last five seasons were 14-games. Since 1978, the NFL has played 16-game regular season schedules. Brown’s record of scoring 100 touchdowns in 93-games wasn’t broken until LaDainian Tomlinson reached the milestone in 89-games during the 2006 season. 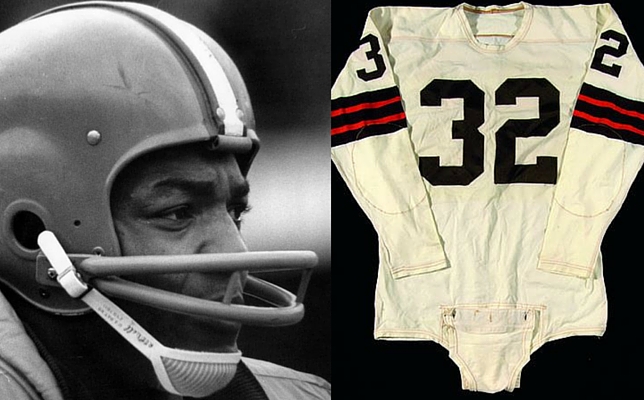 Brown was an 8-time rushing champion, four-time league MVP, selected to the Pro Bowl each of his nine seasons, won the Pro Bowl MVP three times, and won an NFL Championship in 1964. In 2015, a Brown game-worn Cleveland Browns Jersey sold at auction for a cool $50,000.

As Wade Phillips of the Denver Broncos coaches the NFL’s top defense in Super Bowl 50, he owes much of his success to his father, Oail Andrew “Bum” Phillips. One of the most adored sports icons in Texas, Bum Phillips ties to Texas football spans three decades as a High School, College, and NFL coach.

Despite being the winningest coach in Houston Oilers franchise history, Bum was probably more known for roaming the sideline in his large Stetson cowboy hat; that is, as long as the game was being played outside. His mother taught him not to wear a hat indoors. Phillips led the Oilers to two consecutive AFC Championship Games, losing to the Pittsburgh Steelers both times. 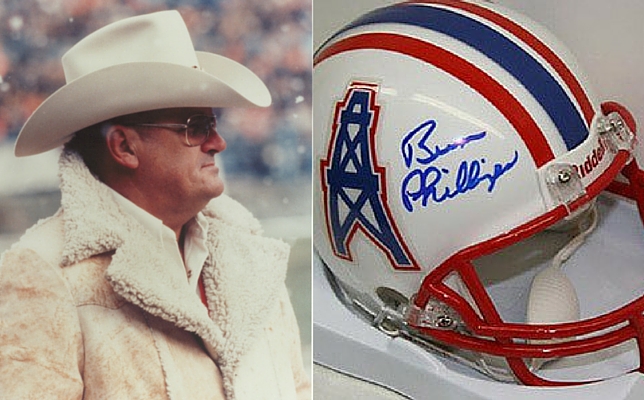 Pictured is an example of the helmet sold at auction. Original photo unavailable.

Does this football look a little flat to you? Maybe a little deflated? Sorry. We just couldn’t resist putting the spotlight on this one. This football derives from the 2014 AFC Championship Game football tampering scandal, otherwise known as Deflategate.

The NFL alleged that the New England Patriots tampered with the footballs used in the Championship game versus the Indianapolis Colts. They alleged the team under-inflated the balls so that quarterback Tom Brady could get a better grip. The league suspended Brady for four games of the 2015 regular season for his alleged part in Ballghazi. Being the competitor that he is, Brady challenged the ruling in federal court in which his suspension was later vacated by Judge Richard M. Berman. 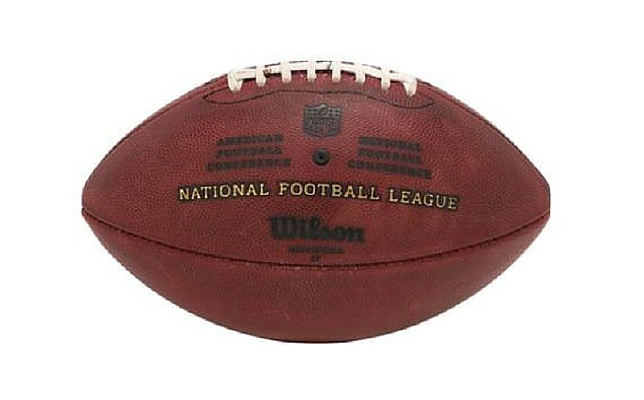 Laura Nichols was given the ball by Patriots receiver Brandon LaFell after his teammate LeGarrette Blount scored a touchdown in the third quarter. In 2015, Auction house LeLands.com sold the ball for $43,740. I wonder if its new owner felt a little deflated after dropping that kind of cash on a football. 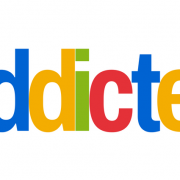 11 Warning Signs That You're Addicted to eBay 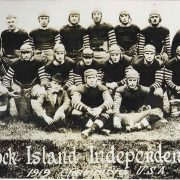 The Greatest Single-Wing Tailback Ever to Play Pro Football 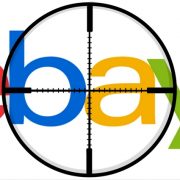