Folk pottery is just as synonymous with the state of Georgia as peaches and pecans are―or at least it should be. Long known for its rich deposits of clay, Georgia inhabitants have long used it to create pottery. Native Americans that once lived along the Savannah River, made cooking and storage wares of the naturally abundant red clay. In fact, earthenware recovered from this region are some of the oldest ever discovered in North America (~2500 B.C.).

Commonly referred to as stoneware clay, Kaolin and Fuller’s Earth are concentrated as alluvial deposits―fine particles of silt, clay, sand, and gravel―found along Georgia’s Fall Line and in the Piedmont Province. When fired, the stoneware is rugged enough to endure frequent handling and repeat usage. 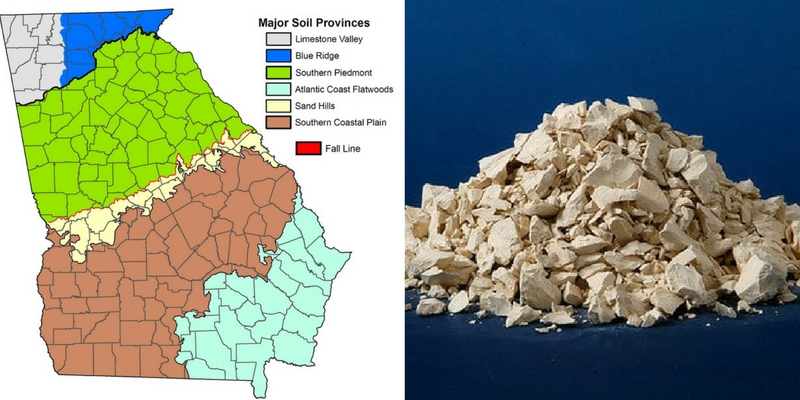 In the early 1800s, Carolina potters introduced Georgia potters to an alkaline stoneware glaze; that when applied to the Kaolin or Fuller’s Earth clay and kilned, creates a green or brownish tint. Made from wood ashes or lime, the glaze melts the sand and other impurities; and when kilned, interacts with the iron in the clay to create the distinctive color that has become synonymous with Georgia Folk Pottery. 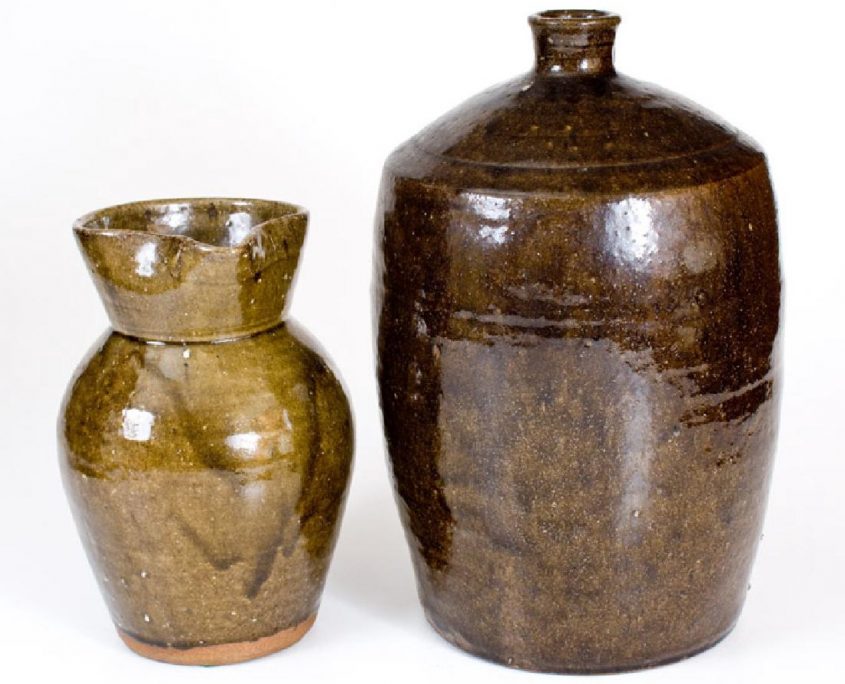 Over time, potters sprouted up along the naturally occurring clay deposits and went into business selling and trading their wares to farmers. Due to the rural and agrarian lifestyle of early Georgia, farmers needed durable jugs to store whiskey and syrup, churns to make butter and buttermilk, and crocks to store and preserve food. Before refrigeration and widespread availability of glass and metal containers, such vessels were essential to life on the farm.

Potters planted their operation where the purest stoneware clay was concentrated. As their operations began to grow, small shops formed around the potter, creating a small town. These towns were dubbed “Jugtowns”.

Along the Fall Line and Piedmont, eight pottery centers were formed―three in middle Georgia and five in north Georgia. Each jugtown produced wares that were uniquely their own, and differed in style when compared to wares produced by other jugtowns. Such distinguishable differences can be attributed to several factors. 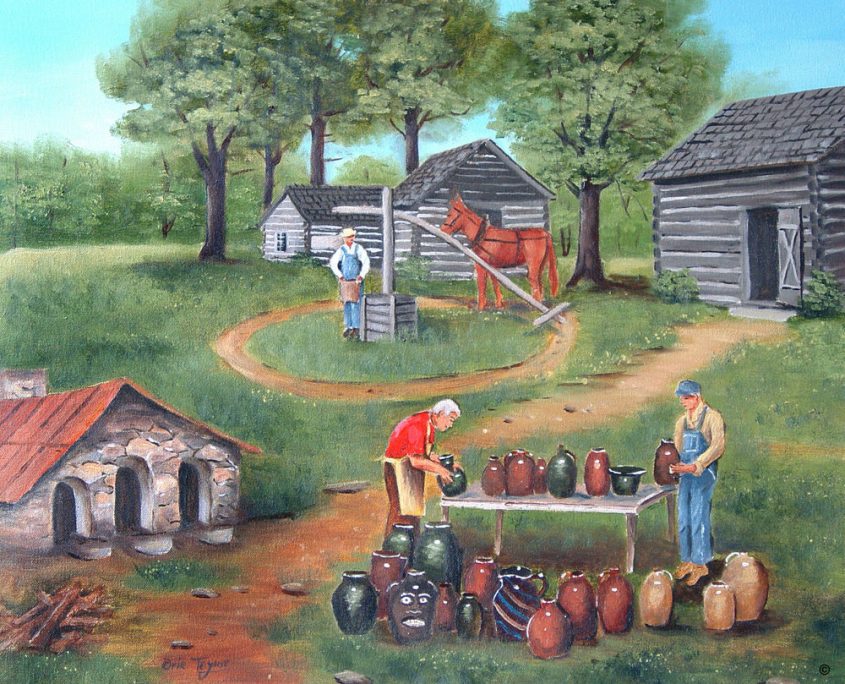 For starters, the composition of the clay differed from town-to-town, affecting the look and feel of the final product. From a stylistic point-of-view, every jugtown typically had a dominant potter that would heavily influence the artistic characteristics of the wares produced. Furthermore, the tools used in each jugtown were typically crafted by the same blacksmith, and the materials used to construct kilns and glazes were also locally sourced. Once a distinct form of pottery was established within a jugtown, its shapes and styles, and the tools and materials used to create them, would be passed on to one generation to the next.

As Georgia rolled into the 20th century, its stoneware artisans were dealt a series of blows that nearly extinguished the folk pottery craft. The first setback came in the form of state enacted prohibition in 1908. In fact, Georgia’s statewide prohibition (1980-1935) began before, and went beyond, national prohibition (1920-33). Prohibition forced licensed distillers to close down, cutting the demand for whiskey jugs. 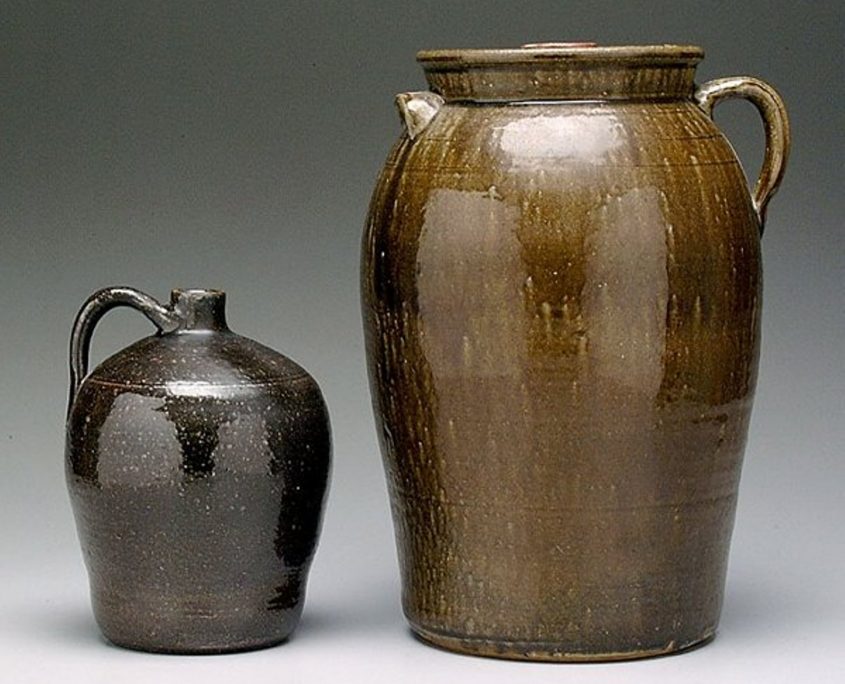 As time passed, glass and metal containers became more abundant and affordable, and a growing number of dairies were commercialized, further reducing the demand for stoneware. The final blow was delivered by the Great Depression (1929-1938). Grocers and other customers suddenly found themselves unable to purchase the wares, effectively closing down the last viable channel of commerce for potters.

Being that necessity is the mother of all creations, a few potters shifted their focus away from the creation of stoneware products for utilitarian use, and instead fashioned more artistic creations that would appeal to a wealthier market. As a stark contrast to that approach, other potters shifted their attention to the other end of the market, creating inexpensive, unglazed garden pottery.

For those that study and/or collect Georgia Folk Pottery, there’s one name that stands out, Meaders.

The first Meaders Pottery was founded in the fall of 1892 by the family patriarch, John Milton Meaders. John M. Meaders had no prior experience as a potter, although he did haul jugs, churns, and other stoneware between north Georgia homesteads on behalf of his potter neighbors in White County, Georgia.

Having joined the potter ranks late, the Meaders’ were not able to enjoy a sustained period of stability and growth before the above mentioned shifts in social and economic conditions forced the family to change its business model.

In 1910, three years after statewide prohibition went into effect, John M. Meaders son, Q. Meaders, assumed the role of spokesman and primary sales representative on behalf of the Meaders family potters. He would go on to teach at Brenau College in Gainesville, GA, helping weave the Meaders name into Appalachian Folk Pottery lore.

In 1920, brothers Cheever and Cleater Meaders ushered in a new era of Meaders Folk Pottery. Cheever inherited the family pottery at Mossy Creek, GA; a year later Cleater opened up shop in nearby Cleveland, GA. They shifted away from food-related pottery, opting instead to focus on more artistic pieces that would appeal to mountain tourists and crafts enthusiasts. 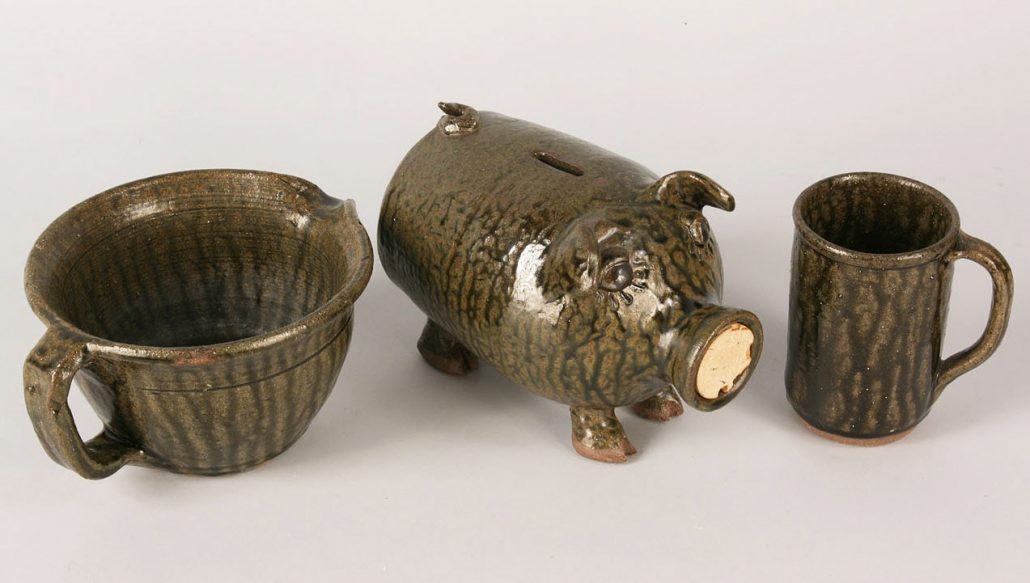 The family affair continued into the 1950s, when Cheever’s wife, Arie, began to create wild and creative pottery depicting animals. Later, Cheever and Arie’s son, Lanier, embraced his mother’s eye for art and his father’s commitment to keeping things old-fashioned. When he took over the business in 1967, he brought back the tradition of jugs with applied faces. His success inspired other potters and crafters in the region to produce similar pieces that are still being shaped and sold. 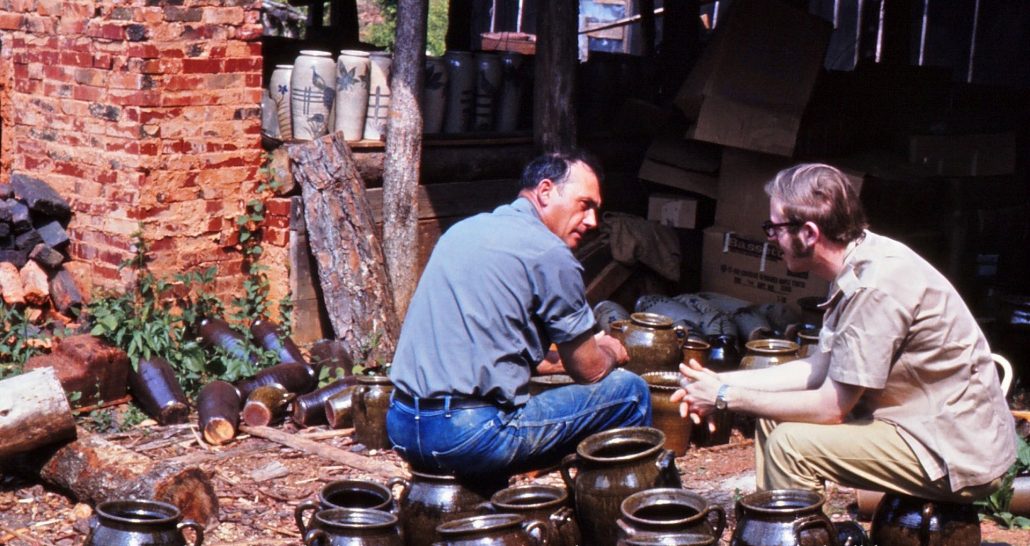 Today, the Meaders’ family tradition is alive and well. In Cleveland, GA, John M. Meaders’ great grandson Clete, digs his own clay and fires his face jugs in a traditional wood kiln. To see Meaders’ and other potters’ work in person, visit Cleveland’s annual Meaders Pottery Face Jug Festival. Also, if you’re in the area, swing by the Folk Pottery Museum of NE Georgia.

For the full story of Georgia’s rich folk pottery tradition, check out Brothers in Clay: The Story of Georgia Folk Pottery, by John A. Burrison.

Estate Planning for Your Collectibles
Scroll to top