Several months ago, I was invited by Butch Holcombe, the publisher of American Digger Magazine, to join him on a metal detecting trip to historic Augusta, Georgia. As I soon learned, the city is undertaking an aggressive “beautification” plan, in which public and private developers are reclaiming abandoned and condemned properties, tearing down dilapidated houses, and replacing them with new ones. Our mission? To search recently bulldozed lots for historical remnants of the past.

We were joined by a wonderful family who knew the history of the area better than most local historians. Over the course of the previous year, they had found a variety of objects dating from the late 1700s, to compelling artifacts from the American Civil War and beyond. After hours canvasing residential lots, sifting through modern trash, and drawing crowds of perplexed onlookers, we had only found a few noteworthy artifacts. As we began searching a new lot, the family traded in their metal detectors for a probing rod and shovels.

I set my equipment down, and watched the family’s son methodically pace back and forth along the back edge of the property. When I asked what he was searching for, he told me “a privy.” Every few steps, he would slowly push the long, skinny metal probe into the ground. He told me he was “listening” and “feeling” for loose pockets of soil, glass, and other foreign objects scraping against the metal rod.

As he explained, it was commonplace for a homeowner to position an outhouse on the far edge of their property behind their home. There, not only would they do what a person does when nature calls, but they would also use the 8-to-10ft hole underneath the outhouse as a trash dump; discarding everything from stoneware, smoking pipes, and other household items. It was those objects that he was “feeling” and “listening” for.

In short order, the young man confidently shouted, “found it!” He threw the probe to the side and began digging. With every layer of dirt removed, broken chards of glass, stoneware, iron, pipe bowls and stems, champagne bottles, and the occasional creepy porcelain doll part were exposed. And yes, seeing a tiny bodiless head with beady black eyes staring up at you through the dirt is indeed creepy! 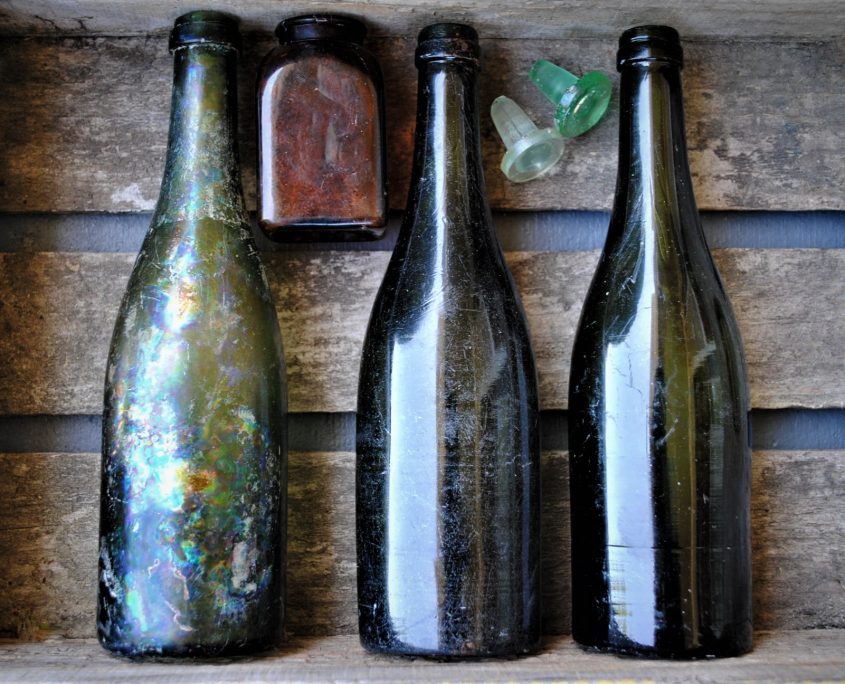 Three champagne bottles and a snuff bottle recovered in the upper layers of the privy. These bottle most likely date to the late 1800s.

Once we reached a depth of about 5ft, we began to uncover large segments of what appeared to be stoneware jugs. After several hours of digging, we had recovered 30 or so large fragments, but unfortunately, were unable to recover a fully intact jug. As I carefully examined some of the larger pieces, I noticed several of them bore some kind of seal, while other chards had what appeared to be a number and signature etched into them. My curiosity peaked, I asked the group if I could keep some of the nicer pieces we found. They generously said yes.

Some of the nicer stoneware jug fragments recovered from the privy. These were found approximately 5ft beneath the surface.

Once home, I cleaned the ceramic fragments and placed them in my “research” box for further examination. Having some spare time on my hands recently, I finally got around to learning more about the stoneware; what it was used for, its origins, and age.

One of the fragments bore an impressed seal, featuring an eagle in the middle, surrounded by lettering. From what I could make out, the lettering on the inverted arch read “ASSAU” and the arch read “RS.” Armed with this, along with several descriptors (i.e. stoneware, jug, clay, bottle), my research lead me to exactly what we had found. 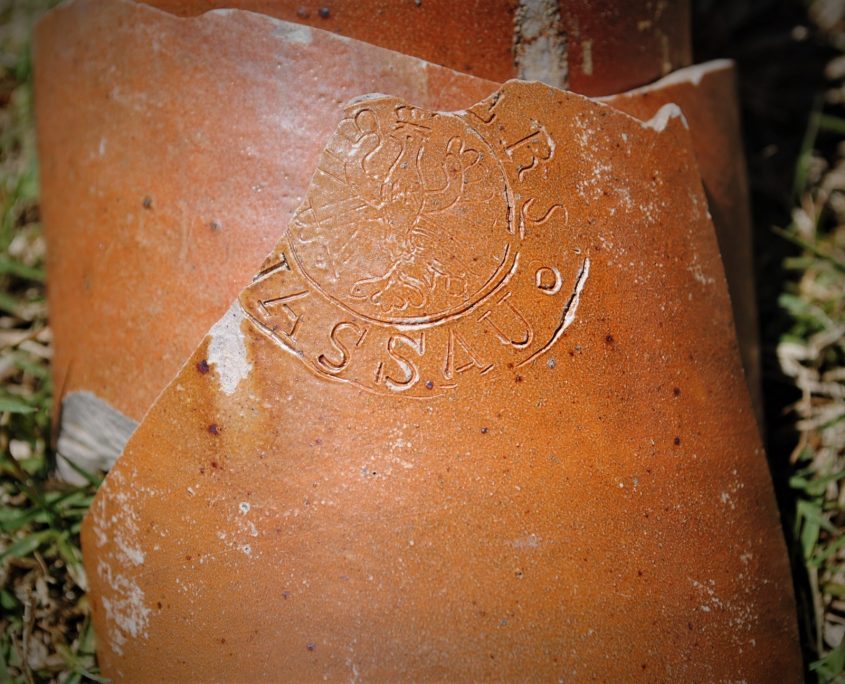 A close up photograph of a stoneware fragment with what appears to be a maker’s seal. The information provided by this fragment was used for researching its origins.

What we had unearthed, were fragments from Nassau Selters bottles―stoneware jugs produced in the Nassau District in western Germany, which is today the state of Hesse. The jugs contained natural mineral water sourced from wells in the Taunus Mountains, in the area of Selters, Hesse.

RELATED ARTICLE: What Was In That Ginger Beer Bottle?

Since the Bronze Age, the water has been known as a natural soda water because of its high concentration of sodium bicarbonate, “soda”. Selters water also contains raised levels of calcium, chloride, magnesium, sulfate and potassium ions. The Romans used the wells and may have given the origin of the current name Selters, either from “aqua saltare” (lat. water jump) or “saltrissa” (salt rising). 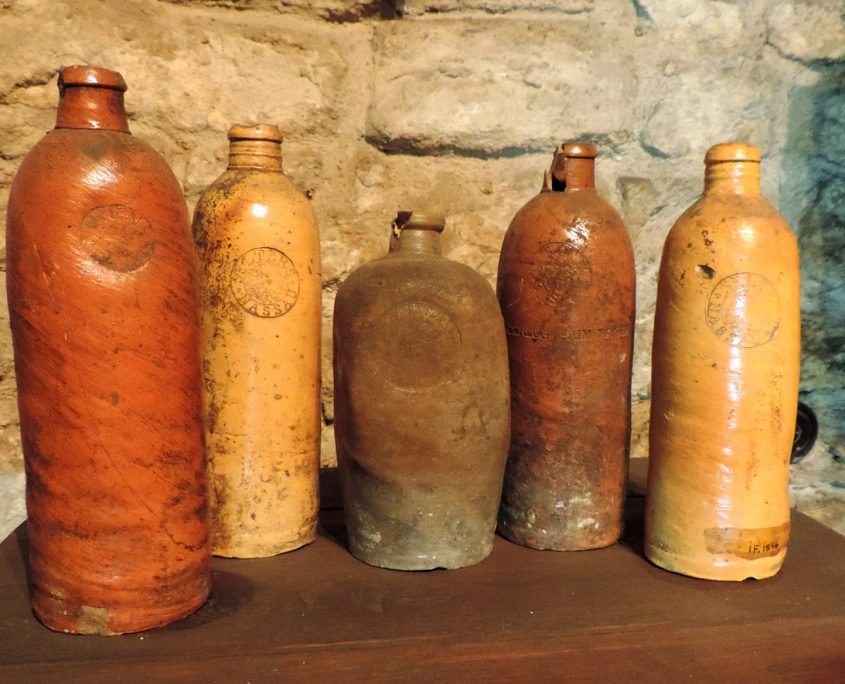 Selters salt glazed bottles at the History of Pharmacy Collection in Cluj-Napoca, Romania.

These wheel-thrown, straight-sided, circular stoneware jugs were stamped with a seal bearing the word SELTERS on the arch of the seal, and the word NASSAU on the inverted arch. The words surrounded a German eagle that contains the initials, F.R., on a shield on its chest. Source.

Identification on the front of the bottles, such as Herzogthum Nasau, identify the political territory of the local nobility or councils that licensed the exportation of the water.

The bases typically exhibit a pattern of ridges left by the wire used by the jugger to cut the clay base off the wheel. The exterior surface is salt-glazed. The necks are quite short and bear a series of encircling ridges that helped secure the wire that kept the cork in place. Each jug has a single applied handle which loops from just below the base of the neck to the base of the shoulder. Under the handle of each bottle is stamped the first initial of the jug maker’s location and their individual number. 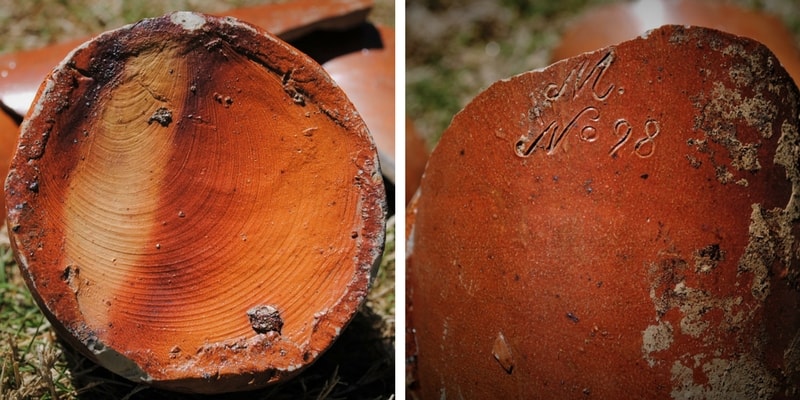 (Left) Notice the circular ridges on the base of the jug left by the wire used by the jugger to cut the clay base off the wheel. (Right) The first initial of the jug maker’s location and their individual number is visible on this fragment.

Various types of stoneware jugs were used as early as the 13th century, although they were more belly shaped. Handles appeared in the 17th century; and taller, straight and cylindrical jugs like the ones we recovered, date from c.1850.

Jugs were purposefully crafted to preserve the freshness and carbonation of the water. The necks were short and the jugs were filled to the top before being corked. As long as the air bubble in the short neck was limited, or non-existent, the cork held and the water would retain its unique fizz. 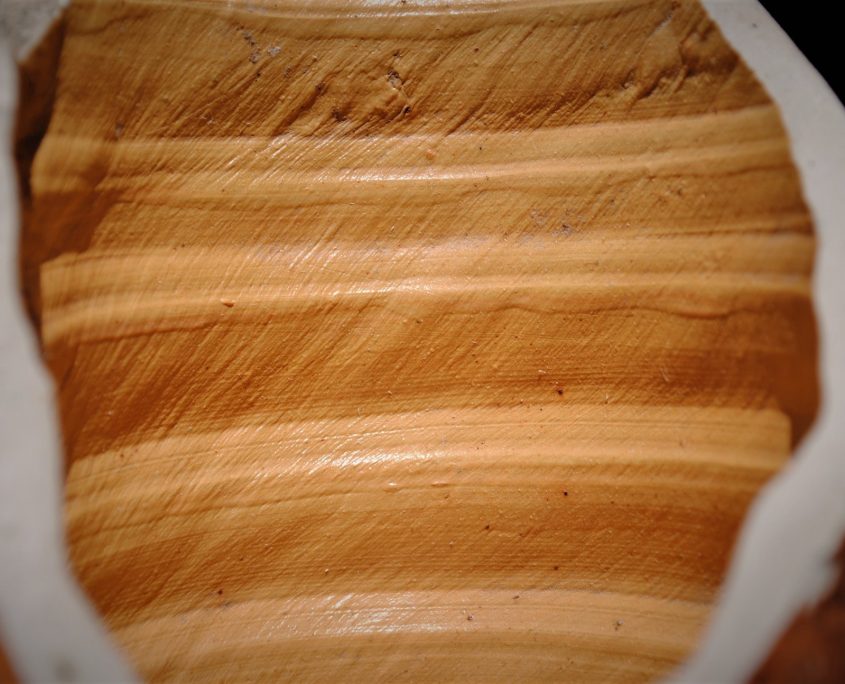 Notice the circular groves formed on the inside of the jug from the wheel-turning of the clay.

Selters jugs were exported to England by at least the early 19th century and may have arrived in the U.S. as early as 1846 at a price of 15-25¢ each. With the introduction of glass containers, the use of stoneware jugs declined by the end of the 19th century and was reduced to 49 jugmakers by 1926. 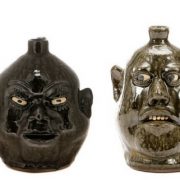 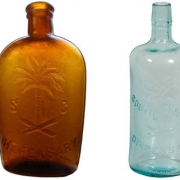 Hawaiian Cache of Bottles, Stoneware, and Relics
Scroll to top