Among the most prolific psychedelic rock bands of the 1960’s and 70’s, the Grateful Dead’s intoxicating music moved its fans and inspired a new era of artists, and art – rock posters.

Formed from the remaining members of a band called Mother McCree’s Uptown Jug Champions, the Grateful Dead began its career as The Warlocks in 1964. After discovering that another band by the same name (The Warlocks) had signed a recording contract, the band subsequently changed their name to the Grateful Dead in late 1965.

The Dead played their first show under the new name on December 4, 1965, at the Acid Test in San Jose, California. Following their first show, the Dead quickly became the favored house band for the remaining “Acid Tests” held at various locations in the San Francisco Bay area. Their shows catapulted San Francisco venues like The Fillmore and the Avalon Ballroom into the iconic music mausoleums they are today. 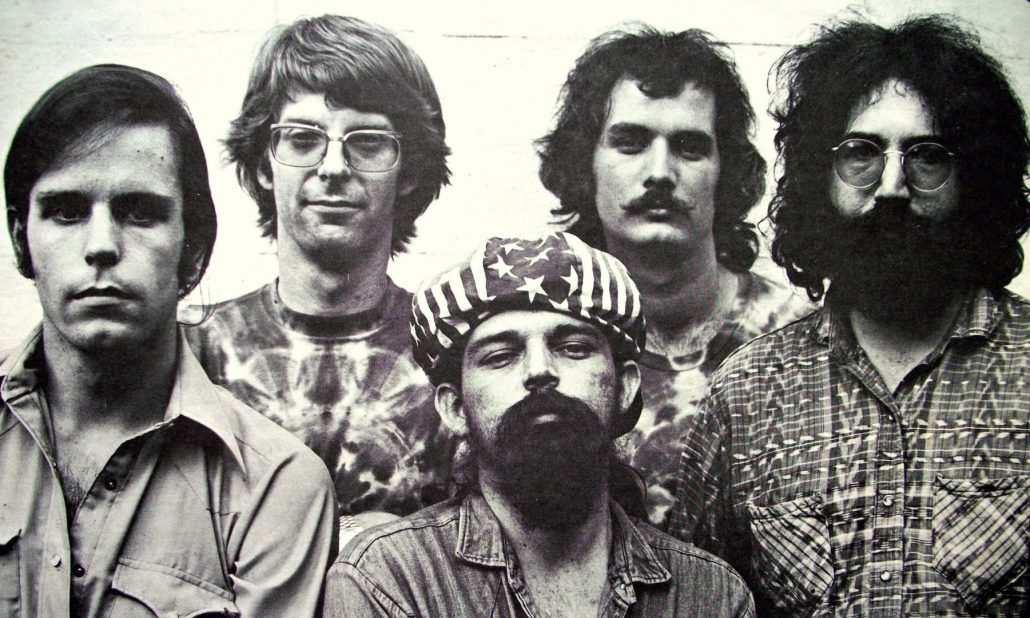 Arguably the most prolific touring band of all time, the Dead played more than 2,300 concerts from 1965, up until Jerry Garcia’s death in 1995. And being that most concerts were accompanied by posters, the array of Grateful Dead concert posters is astounding.

There are so many levels of this stuff. A poster unlocks memories just like a record does. You know how the records you listened to were the background music of your life? Well, the posters are the front pages, the covers of your life. I just can’t help looking at these and going BOING! I don’t know why. It’s what art is. —Jerry Garcia, 1987

In 1966, concert promoters Bill Graham and Chet Helms knew they had to promote the psychedelic sound of the bands they represented. To do so, they searched for artists that could imitate the LSD-fueled music in their art.

Artists relied on vivid color, bold stylized lettering, and optical illusions to draw its audience in – simulating the experience of listening to psychedelic music on an LSD trip. In the beginning, artists and promoters didn’t view their creations as anything other than a means to an end―a colorful way to get people to buy tickets to their concerts.

Ever the promoter, Bill Graham soon realized they might be making art and rock-n-roll history. Graham, a legendary rock concert promoter who arranged tours for the Grateful Dead, Jefferson Airplane, the Rolling Stones, and others, started to save copies of every poster that came of the press.

Today, original copies of Graham’s posters in mint condition are extremely rare and valuable. Most surviving copies are damaged from being stapled, taped, and removed from telephone poles and windows. Some of the most pristine examples can be found in museums including the Smithsonian, the Louvre, and of course, the SFO Museum.

The most notable concert posters can be categorized into two series: the Bill Graham numbered series and the Family Dog numbered series. Both showcase such fabled performers as Jimi Hendrix, Led Zeppelin, Janis Joplin, The Who, and Jefferson Airplane. 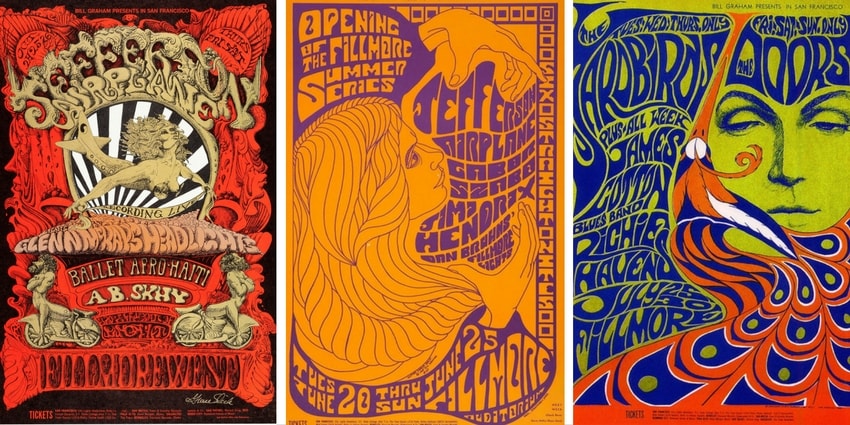 Promoting bands playing at The Fillmore, the Bill Graham numbered series is the best documented of the two. Nearly 300 posters were produced from 1966 to 1973, with each poster being numbered and catalogued. Such a methodical approach to publishing has made it much easier for collectors to identify and track Graham originals.

In 1966, Bob Cohen partnered with a laid-back rock promoter named Chet Helms to open the Avalon Ballroom, an upstairs dance hall. In direct competition with Graham and The Fillmore, they differentiated themselves by billing their concerts as “environmental theater”. With nowhere to sit, fans would dance in-and-around the band under a symphony of liquid lights and sound.

To promote their “theater” events, they too produced a series of posters. 147 posters were produced from 1966 to 1968. They called their commune and promotions company, The Family Dog.

The group of artists behind The Family Dog posters were hand-selected by Helms and quickly attained legendary status within art circles, the music scene, and throughout the greater counterculture of the 60’s. The group became known as the “San Francisco Five” – comprised of Stanley Mouse, Wes Wilson, Alton Kelley, Rick Griffin, and Victor Moscoso. 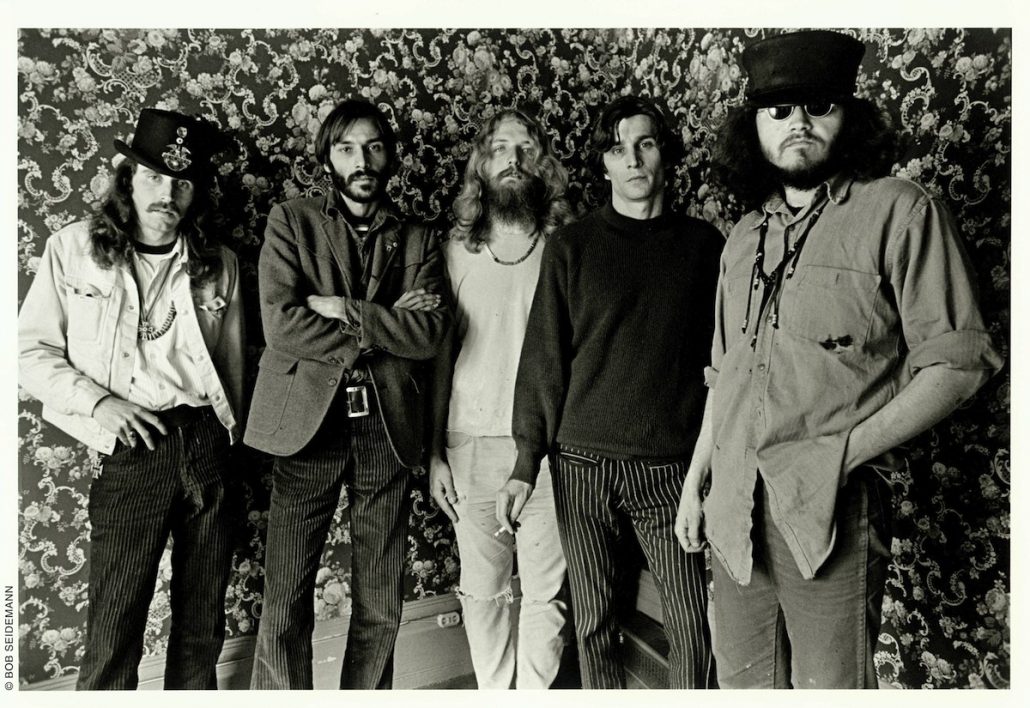 After The Avalon Ballroom closed in 1969, The Family Dog continued to promote events and concerts in other cities. However, those posters were not numbered, making them a little tougher to track down and authenticate.

Bands soon took notice of the impressive artwork being created and turned to those artists to produce art for their albums. Most notably, much of the artwork associated with the Grateful Dead was designed by three of the “San Francisco Five”, Stanley Mouse, Rick Griffin, and Alton Kelley.

Most Famous Grateful Dead Poster of Them All

Perhaps the most iconic Grateful Dead poster ever produced is the “Skull and Roses” poster. In fact, some may argue it’s the most iconic concert poster ever created for any band or concert. The poster was created by Stanley Mouse and Alton Kelley to promote the September 16 & 17 Avalon Ballroom shows in 1966. 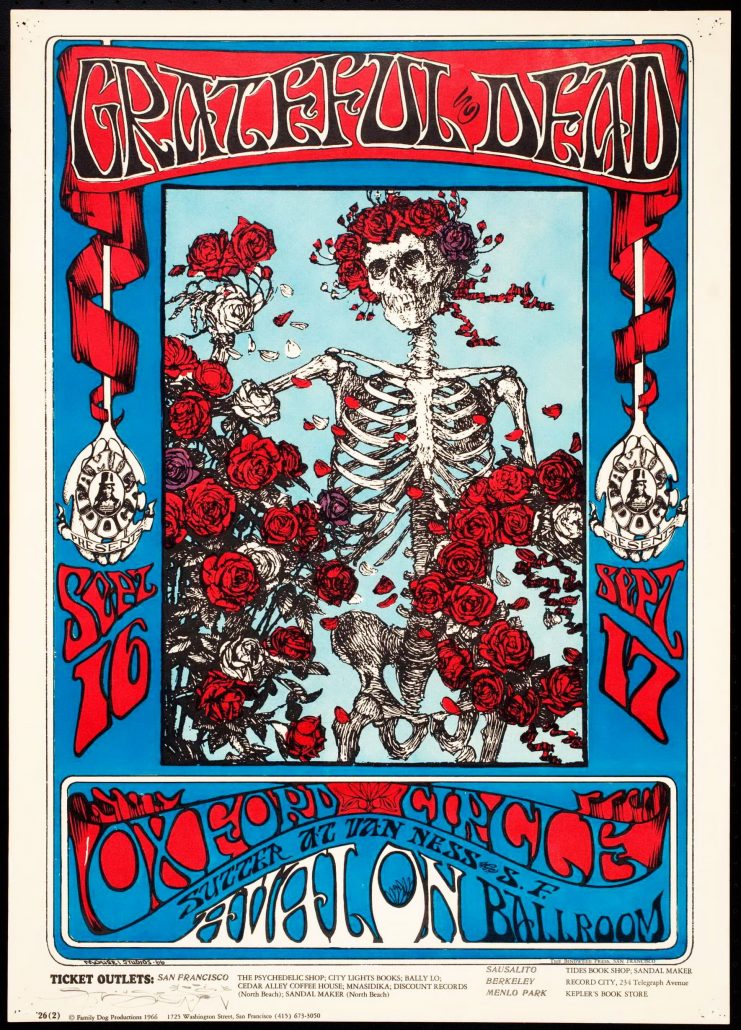 That poster started the lasting tradition of using skulls, skeletons, and roses to symbolize the Grateful Dead. And if you’re an ole’ “Dead Head” who collected concert posters at one time, you might want to rummage through your collection. At a 2015 auction, an original “Skull and Roses” poster fetched a hefty $19,000!

If you do happen to stumble upon an old concert poster and want to know its value, or if you’re interested in buying one, checkout WolfGangs vintage concert posters. And if you’re looking for something specifically from the Bill Graham or The Family Dog series, click here.

In 1966, who would have thought that a colorful paper poster stapled to a telephone pole would have revolutionized the art world and come to symbolize an era of transformational music and culture?

Need something to listen to while cruising the web? Here’s a beautiful transition from Sugar Magnolia to Scarlet Begonias to Fire On The Mountain, recorded live at the Closing of Winterland on December 31, 1978.