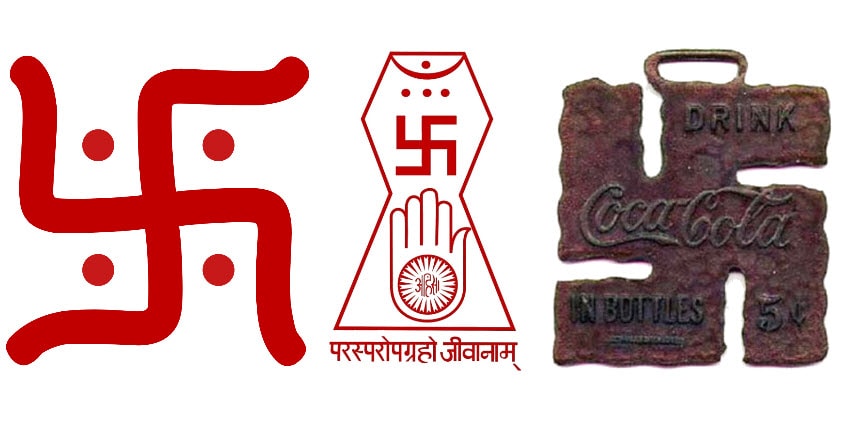 In his pseudo autobiography and political manifesto Mein Kampf (My Struggle), Adolf Hitler explained the moment he chose the design of the Nazi flag. He wrote: “Meanwhile, I myself, after innumerable attempts, had put down a final form: a flag with a background of red, with a white circle, and in its center, a black swastika. And this then was kept.” 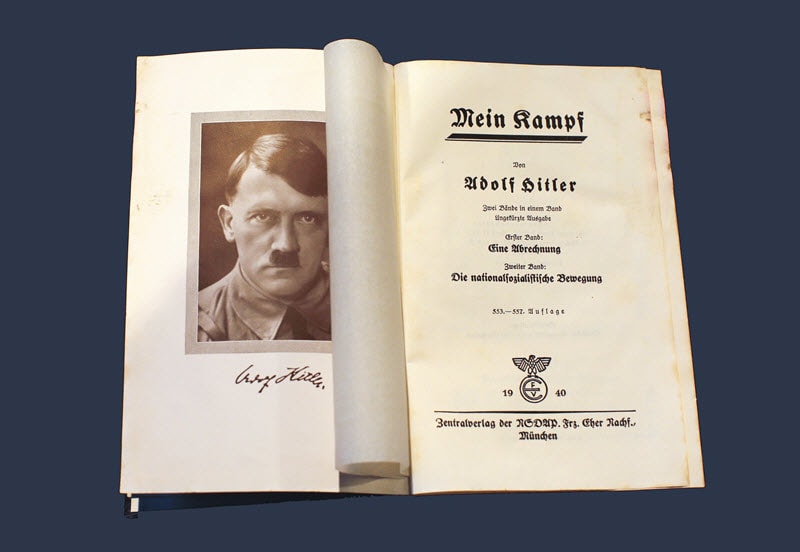 He went on to describe the meaning of the flag, saying: “As National Socialists we see our program in our flag. In the red we see the social idea of the movement, in the white the national idea, in the swastika the Mission of the fight for the victory of Aryan man, and at the same time also the victory of the idea of creative work which in itself is and will always be anti-Semitic.” 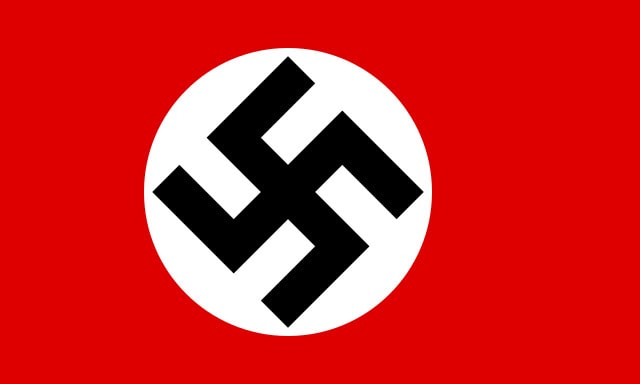 To most, the swastika represents the worst of humanity – the cruel persecution and systematic slaughter of millions of innocent lives and one of the most catastrophic wars ever waged. But Hitler and the Third Reich were not the first to use the swastika. Not even close.

The Ancient Language of Hinduism

The word ‘swastika’ (or svasktika) is rooted in Sanskrit, the ancient liturgical language of Hinduism. Translated, svasktika means “Well Being;” to have “Good Luck” or a “Good Existence.” In Buddhism, the swastika is closely associated with Buddha and symbolizes prosperity, good fortune, and eternity. In fact, Buddhists consider it a diagram of Buddha’s footprints. In Jainism, an ancient Indian religion, they believe the symbol serves as a reminder of the four places of rebirth: the animal/plant world, hell, Earth, or in the spirit world.

(Left) Called svastika in Sanskrit, it is an ancient symbol of auspiciousness in Hinduism, Buddhism, and Jainism. (Right) This is the official symbol of Jainism, known as the Jain Prateek Chihna.

The Migration of the Swastika

Swastikas on pottery and other household objects found in China suggest that the swastika traveled with traders and with the spread of Buddhism throughout Asia. Ancient examples of the swastika are not limited to Asia and South Asia. In fact, the swastika is steeped in European history and tradition. The symbol was used by Ancient Greeks, Celts, and Anglo-Saxons. 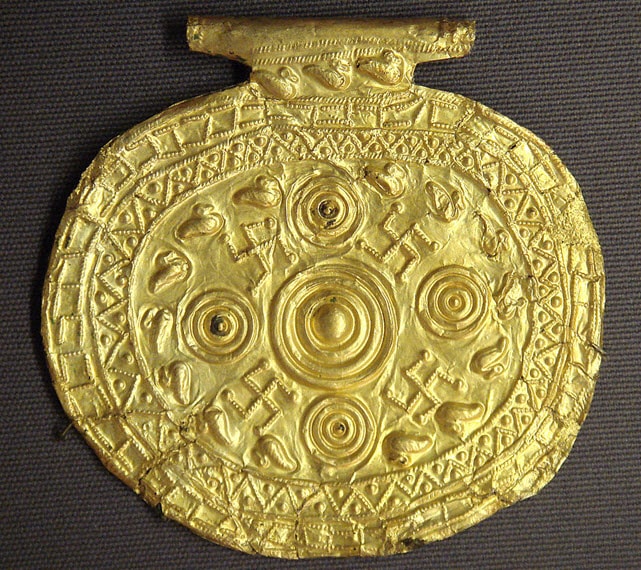 There are no definitive answers as to how the symbol migrated to Europe, Africa, and the New World. There are two plausible theories. One such theory suggests that the symbol was carried by Chinese traders during their voyages around South America. Another hypothesizes that the swastika accompanied Asians when they crossed the land bridge to Alaska, migrated south, and became the indigenous people of North and South America.

The latter sounds reasonable considering the swastika’s association with the Navajos. In his book, The Swastika Symbol in Navajo Textiles, Dennis J. Aigner explains what the swastika represents to the Navajo People–the four arms of a whirling log. The Navajos tell a tale of a man, castaway from his tribe, who rolls down river in a hollowed-out log (represented by the swastika). With the help of sacred deities he finds a place of friendship and abundance. 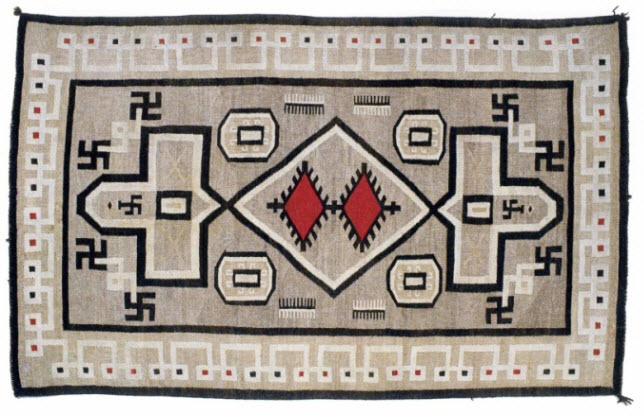 Many collectors of Navajo textiles are familiar with the swastika design woven into rugs. Originally, the Navajos only used the swastika, in the form of sand paintings, for religious ceremonies. It wasn’t until the late 1800’s when traders persuaded the Navajos to recreate the sand paintings in their rugs. The rugs were then marketed and sold in trading posts located in Arizona, New Mexico, and surrounding areas.

To pay homage to the Navajo people, the Arizona Department of Transportation marked its state highway signs with a swastika on an arrowhead. It wasn’t until 1942, (after the U.S. entered WWII) that the department replaced the symbol on their signs.

The Swastika in America Culture

The swastika was also used in architectural design throughout the United States. For example, the Garfield Monument in Cleveland Ohio, erected in 1890 as a tomb and memorial for the slain President, contains swastika tile patterns on the floor. 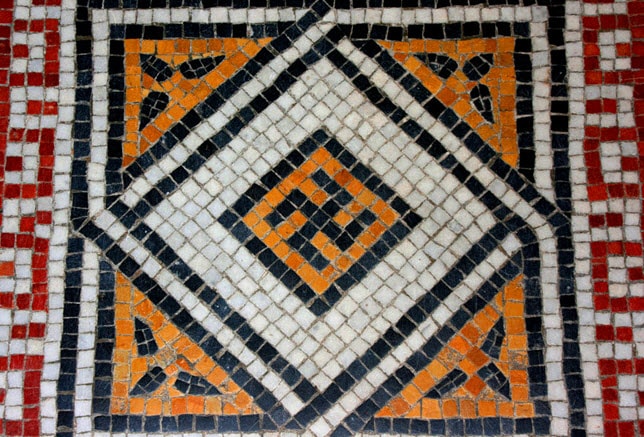 Swastika pattern displayed in the tile floor of the Garfield Monument in Cleveland Ohio.

The unit symbol of the 45th Infantry Division (USA Army), was a yellow swastika on top of a red background. Ironically, they wore the patch while fighting the Germans in WW 1.

And let’s not forget about the Ladies’ Home Journal Girl’s Club! Formed in the early 1900’s to encourage young women to sell magazines, members of the Girl’s Club wore swastika membership pins and swastika-decorated handkerchiefs. They even had their own club magazine, “The Swastika.” 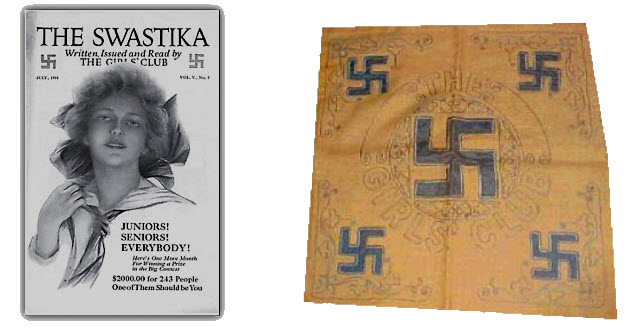 The use of the swastika was so prevalent in American culture that merchants used the design on coins, souvenirs, store tokens, watch fobs, and other forms of advertising. In Gary Patterson’s book “United States Swastika 1907-1936: Tokens, Medals, Watch Fobs & Good Luck Charms,” he states that collectors have identified more than 1,400 different swastika designed trade pieces distributed by businesses from 1885 to 1939, with a few more after that. Most swastika designs also included other “Good Luck” symbols such as a horseshoe, four-leaf clover, wishbone, rabbit’s foot, or keys.

One of the most iconic examples of this, is a Coca-Cola watch fob (c.1925) made in the shape of a swastika. The arms are right-facing and are adorned with the slogan, “Drink Coca Cola five cents in bottles”. 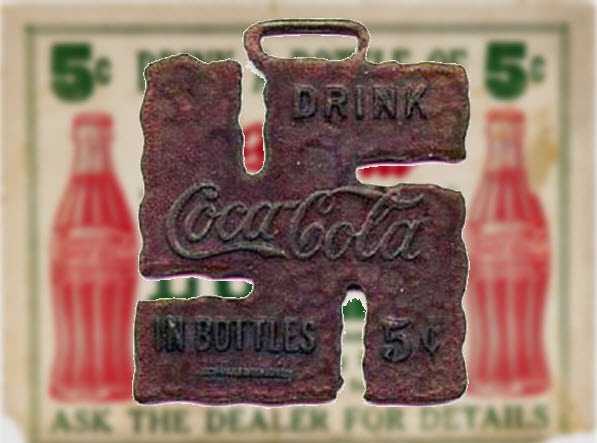 Coca-Cola watch fob made in the shape of a swastika.

So how did a symbol of well-being, which was embraced by so many diverse cultures over thousands of years, become a symbol of hate, aggression, and death?

The Nazi use of the swastika stemmed from their belief in the Aryan invasion theory, in which they claimed that the early Aryans of India, from whose language the swastika was formed, were the prototypical white invaders.

Nazi racial theories held that a master Nordic race migrated through northern Europe and expanded further south to Iran and India where it founded the Aryan cultures of Zoroastrianism and Hinduism. The theory went on to suggest that the great Aryan conquerors’ strength and power “degenerated” when they mixed with “inferior” peoples. For the Nazi’s, the Aryans of India were both a model to be imitated and a warning of the dangers of spiritual and racial confusion that arose from the mixing of races.

These theories were seized upon by the Nazi’s. In turn, they appropriated the swastika as an Aryan symbol to boost a sense of ancient lineage for the Germanic people – forever tarnishing a once welcoming symbol shared by generations of diverse cultures around the world.

The swastika was banned in Germany at the end of World War II.