While you might not know the name Clark Byers, there’s a good chance you know his work. The former $3-a-week buttermilk bottler turned sign painter, spent more than three decades crisscrossing 19 states, persuading farmers to let him paint their barns. And persuasion was needed. In exchange for a free paint job, farmers allowed Byers to incorporate advertising slogans into the job. His work, which once covered some 900 barn roofs, helped turn a sleepy tourist attraction into a world famous phenomenon.

The tourist attraction was Rock City Gardens, a 10-acre rock garden positioned atop the jagged cliffs of Lookout Mountain, Tennessee.

Opened in 1932 by a miniature-golf tycoon (apparently there is such a thing), Garnet Carter, the businessman thought it would be wise to charge people for the privilege of walking around a winding path of, well, rocks. The concept and timing could not have come at a worse time, as America was in the throes of The Great Depression. The attraction struggled mightily to gain traction.

Searching for marketing ideas, Carter reached out to his Chattanooga advertising friend, Fred Maxwell for help. His idea? Paint over-the-top “come-ons” on the roofs of the massive barns that lined the two-lane highways coming and going through Chattanooga. 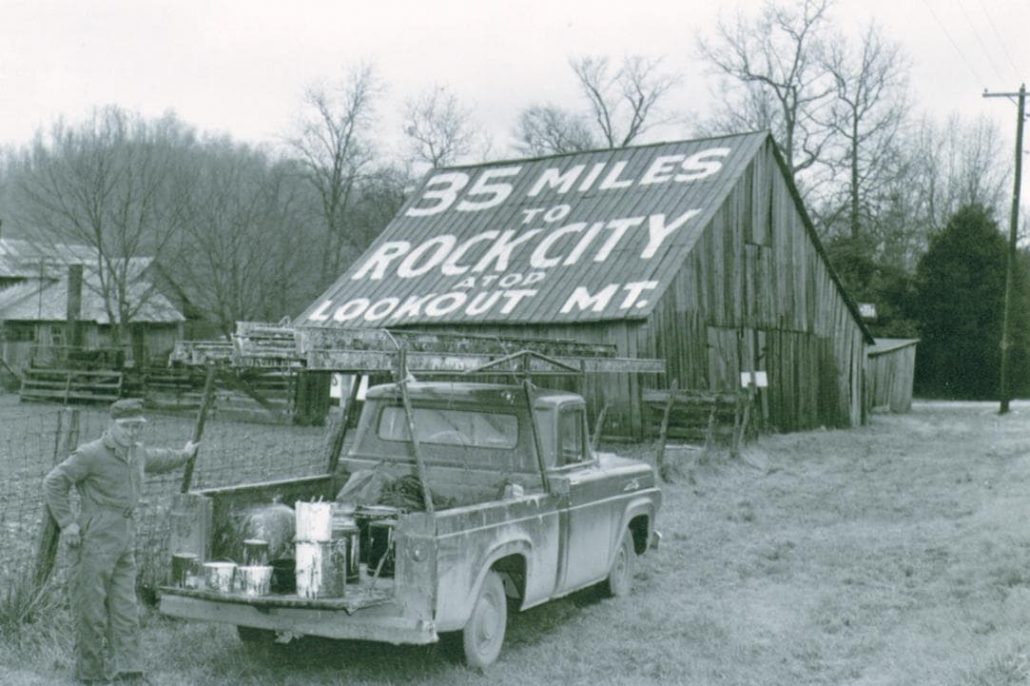 A young Clark Byers stands beside his pickup truck, posing in front of a freshly painted barn.

Carter hired a Clark Byers, a young sign painter, to travel the nation’s rural, two-lane highways in search of roadside barns in need of new paint. Byer’s pitch? In exchange for a free paint job, he would give farmers free Rock City thermometers and other souvenirs, and even negotiated free paint maintenance plans, returning every two years to freshen-up the fading paint. In return, the farmers would allow Byers to paint three simple words on their barns: See Rock City. In the years to come, the signs began to appear as far west as Texas and as far north as Michigan. 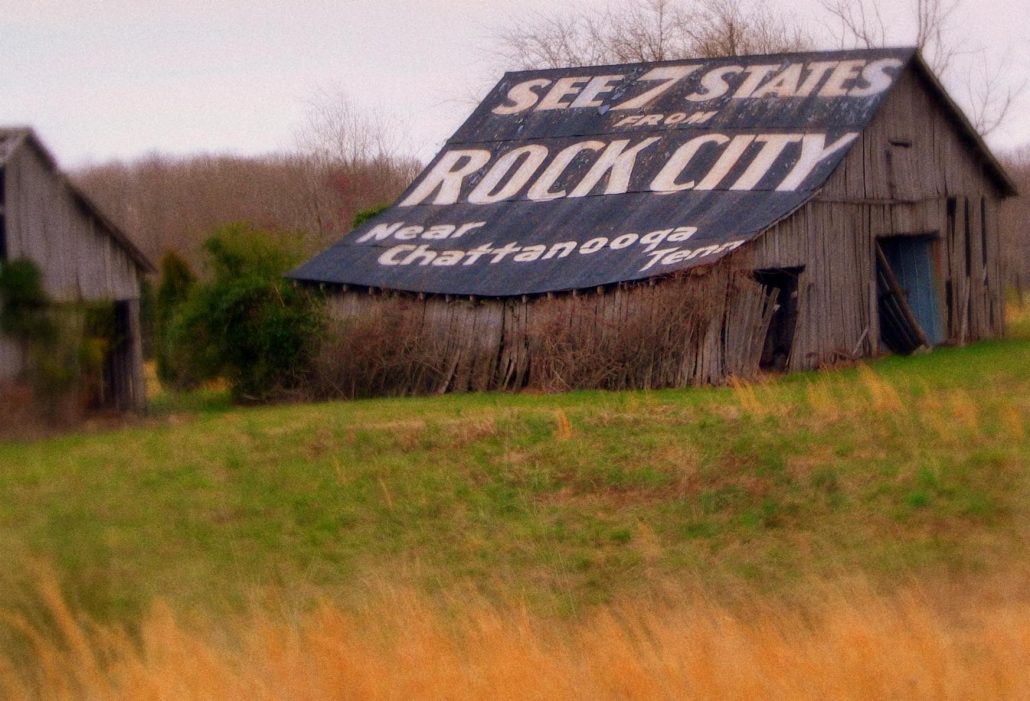 Many have referred to the hard-to-miss black, white, and red painted barns as “Barnyard Rembrandts.” 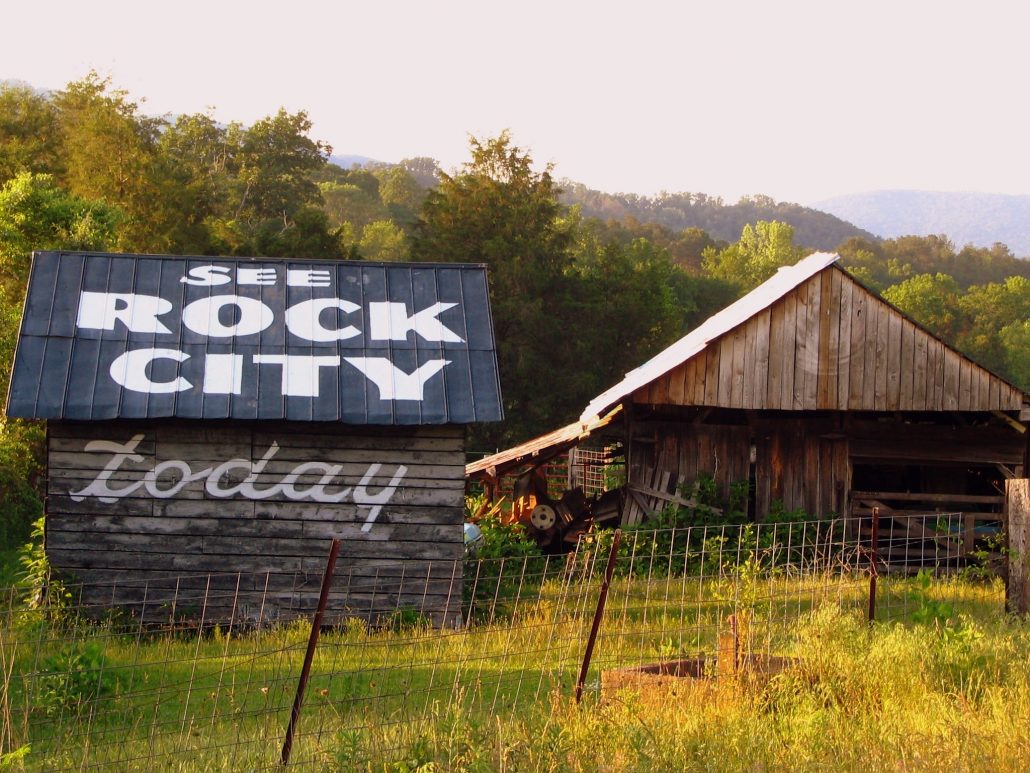 These two barns are along the highway that runs from Birmingham to Chattanooga in DeKalb County, Alabama. The See Rock City barn faces highway US 11. The other barn is a painted advertisement for Rock City and is visible along Interstate 59. Photo courtesy of Brent Moore, Flickr.

Byers love and passion for Rock City transcended barns. After painting “See Rock City” on the roof of his own home, he thought his mailbox would be the perfect complement, so he replaced his mailbox with a miniature barn, and painted it. When the Postal Service took issue with the alteration, he decided to build a miniature barn birdhouse. Today, “See Rock City” birdhouses remain one of Rock City’s best-selling souvenirs. 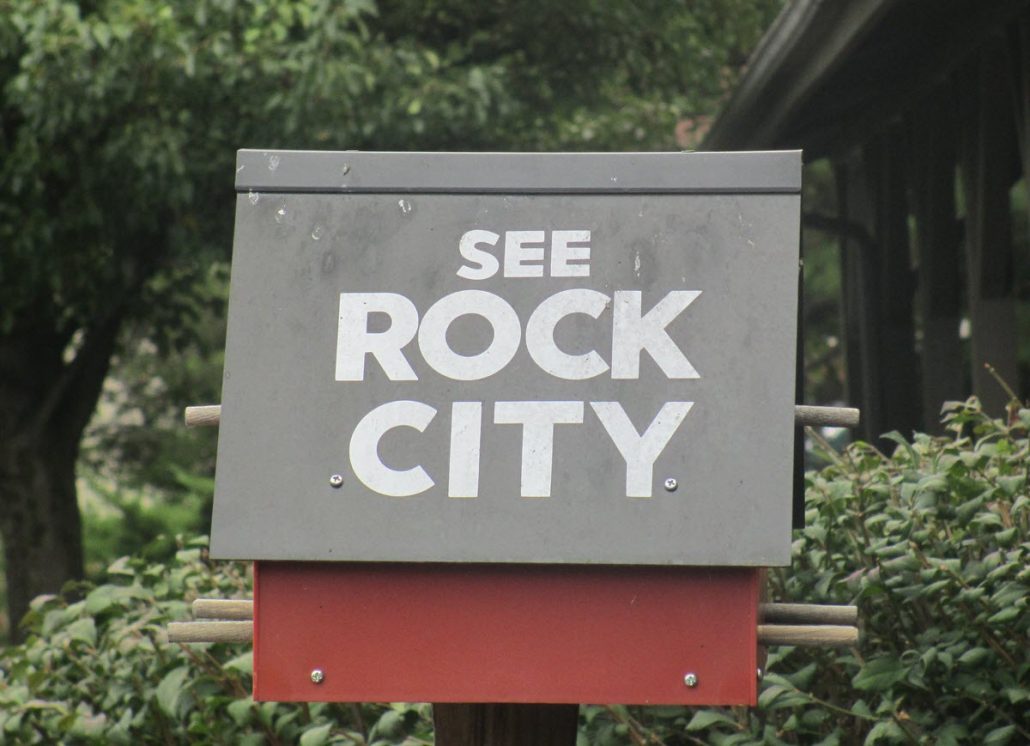 The “See Rock City” birdhouse is one of Rock City’s best-selling souvenirs.

Byers continued painting barns until he was forced to find another line of work in 1968. While painting a barn near Murfreesboro, Tennessee, he accidently came into contact with an electrical wire, sending more than 7,000 volts through his body. Having nearly killed him, the shock temporarily paralyzed him and put an abrupt end to his painting career.

If the accident hadn’t ended his career, the new interstate system and the Highway Beautification Act of 1965—often referred to The Ladybird Act—would have. The newly developed interstates lured people away from the rural two-lane highways that so many “See Rock City” barns flanked; while the Ladybird Act curtailed new roadside advertisements, and even mandated many of the Rock City slogans to be painted over.

For nearly 50 years, Byers’ work has slowly faded away due to development and the elements. Still, his work lingers on. States such as Tennessee, West Virginia, and Ohio have taken measures to protect his painted barns as historic sites. Of all the surviving barns, Tennessee, Rock City’s home state, has the most. 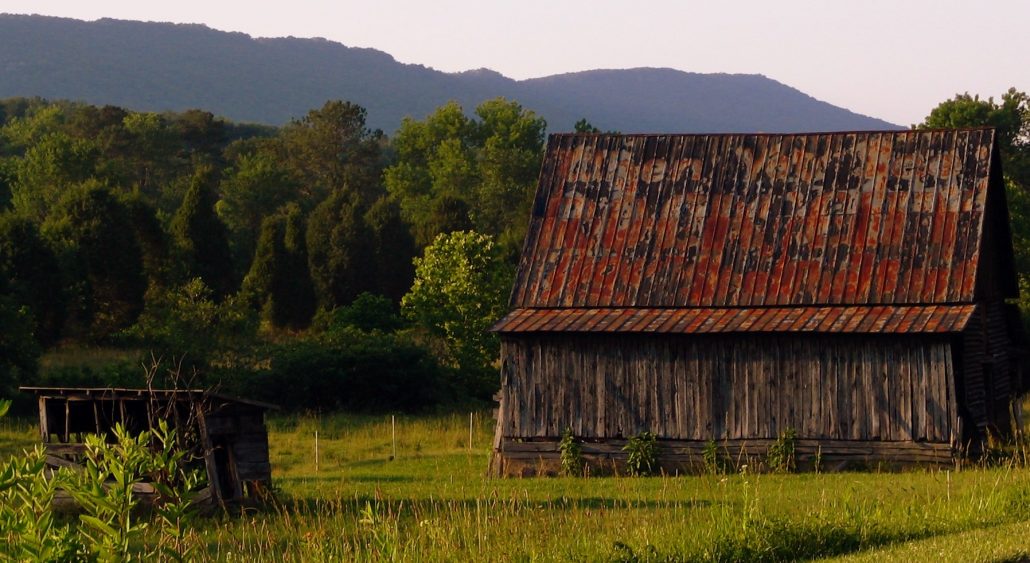 Located on U.S. Highway 11 in DeKalb County, Alabama, this faded barn roof reads: “When You See ROCK CITY You See The Best.”

Today, Rock City maintains nearly 75 barns. In addition, other efforts have been made to preserve the legacy of Byers’ work. In 1997, Rock City commissioned photographer David B. Jenkins to create a coffee table book “Rock City Barns: A Passing Era“, that showcases more than 250 of Byers’ painted barns.

After hanging up his paint brush in 1969, Byers went on to own and operate Sequoyah Caverns and Campground in Alabama, and later retired to a small farm in Georgia. In 2004, he passed away at age 89.

Despite their reduced numbers, you can still see some of these historic works of art along roadways in the Southeast and beyond. SeeRockCity.com has created an interactive map to help you spot a Byers’ original on your next road trip. 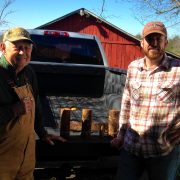 DIY Display Cases – Show Off What You Collect!
Scroll to top