There’s nothing that screams love like an old, sanded-down dime.  Found all over the world, love tokens are coins that have been removed from circulation, sanded smooth on at least one side, and hand-engraved with letters and/or symbols that represent a particular sentiment.

At the height of their popularity in the late 1800s, love tokens were all the rage in the United States and Great Britain. In America, the Civil War (1861-1865) brought suffering and loss to nearly every family. Such grief made Americans more aware of the fragility of life; and subsequently, more sentimental. During the same period in England, Queen Victoria popularized jewelry that revealed and expressed feelings of love and grief. Her style of fashion was soon embraced and practiced by those in Great Britain and abroad. At the intersection of sentimentality and new fashion, the popularity of love tokens took off.

Although we can point to the late 1800s as the golden age of love tokens, the tradition of carved and altered coins had precedence. In the late 1500s, the French practiced a wedding tradition known as Treizain. A set of 13 carved or altered coins were blessed by a priest and then given by the bridegroom to his bride during the wedding ceremony. There are many thoughts as to the origin and meaning behind this tradition. In the oldest traditions, the Treizain represented the “purchase” of the bride’s virginity. From a biblical perspective, it symbolized the bridegroom’s commitment of his life and property to his wife. Today, variants of Treizain are still practiced in some parts of France and Spain.

Not to be outdone by the French, the British had their own coin-related customs. Known as “benders,” a man would bend two edges of a coin (typically a sixpence) in opposite directions, on opposite sides. Benders were often given to young ladies by admiring men to charm them into love. This physical feat of bending the coin would show the man’s intended sweetheart the true strength of his love for her. And if the man’s advances were rejected, he could drink all day and get thoroughly inebriated at a tavern for tuppence, which gave rise to the phrase “going on a bender.”

When the 1700s rolled around, the British discovered how to make their own designs on coins. Through a technique known as pinpunching, an average person would initial or design the smoothed side of a coin by hammering a steel pin into the coin, creating a small hole. A series of 20 or more holes could make one initial. Wealthier people would have their coins elaborately engraved by a jeweler or watchmaker. As time progressed, everyone from folk artists to professional engravers made engraved coins, usually from copper coins such as half pennies, pennies, and two pence.

During the American Civil War, soldiers used coins for more than just currency. Out of fear of being killed and buried as an “unknown soldier,” soldiers would engrave their personal information on coins, and use them for dog tags. Coins were also used to make field repairs to clothing, in which a coin was used to replace a lost coat button. And for a romantic sendoff, a departing soldier would engrave a coin as a gift for a woman he left behind. 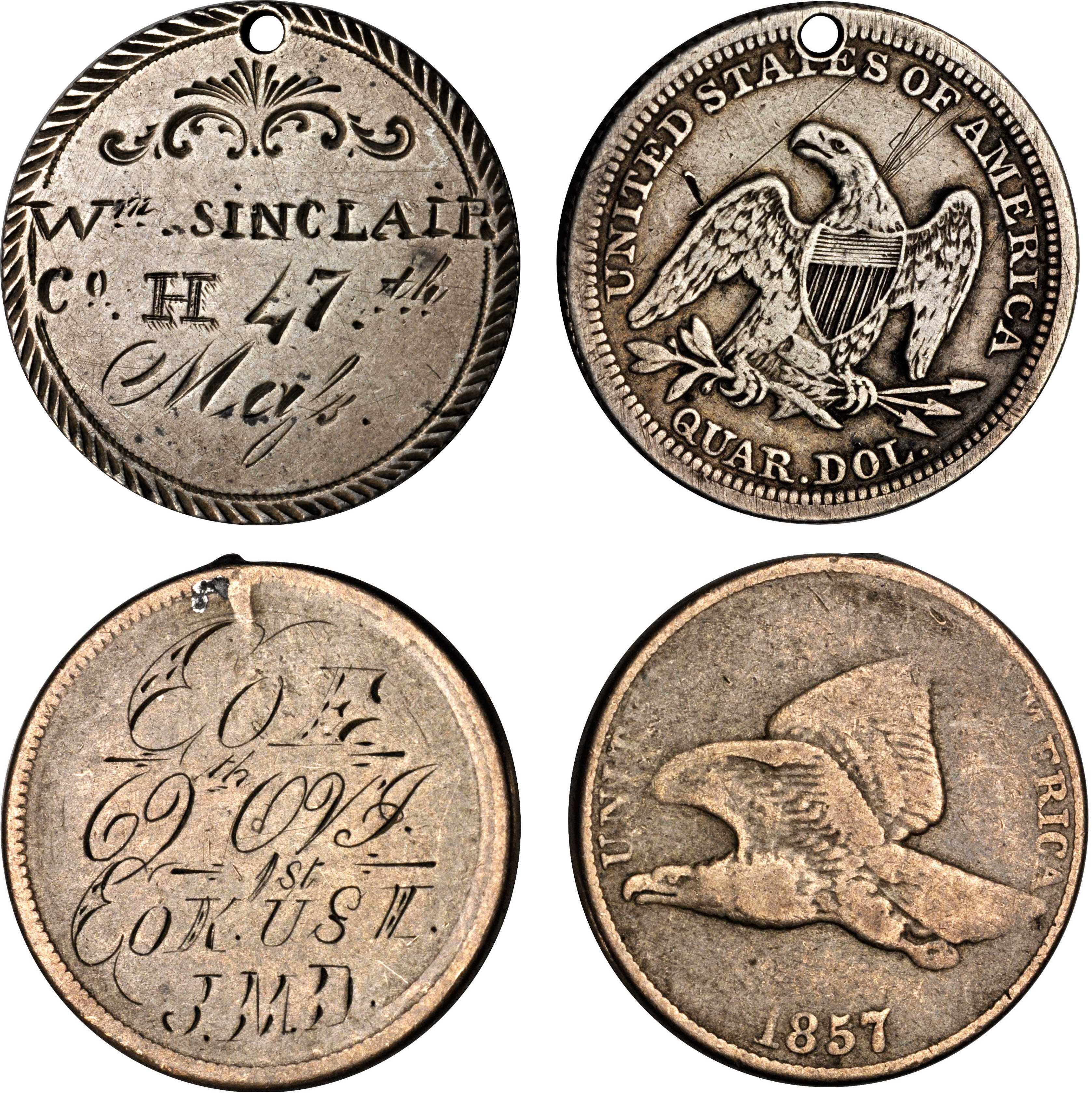 At their height of popularity between 1876 and 1893, elaborate and stunningly engraved love tokens became an obsession for people in the United Kingdom and the United States.

Perhaps the most the common love token is the “triple-overlapping initials” design, typically found on a Seated Liberty Dime. This design would showcase three letters (initials) woven into one another. Typically, of the three letters, the tallest and narrowest letter was the initial for the first name, with the widest letter being the last name. Considering the available canvas afforded by a dime, this design choice makes sense.

The engraved initials were often those of a suitor. For the recipient, the token acted as a reminder of the person that gave them the token. On the occasions in which the token didn’t feature the giver’s initials, it was used as a proposal for marriage. If a gentleman wanted to get married, he would engrave a coin with the initials of his family name, along with the initial of the woman’s first name. If the woman accepted and wore the token, the couple was officially engaged.

While romance and marriage were the most common reasons for the exchange of love tokens, many other reasons existed – from love, relationships, and friendships to the expression of mourning.

Engraved words that represented a relationship were also common. For example, words like ‘brother,’ ‘mother,’ ‘father,’ ‘sister,’ ‘uncle,’ ‘aunt,’ and just about any other family member you could have, were engraved on a coin.

Pictorial and symbol-based love tokens were used to communicate a plethora of feelings. Some symbols were easily interpreted (a horseshoe means “good luck”). Others weren’t so easily interpreted. Let’s take flowers for example. During the Victorian Era, people communicated their feelings through “the language of flowers.” If you wanted to express your “appreciation” for someone, you gave them a tall sunflower. If a boy wanted a girl to “be mine,” he would give her a four-leaved clover. 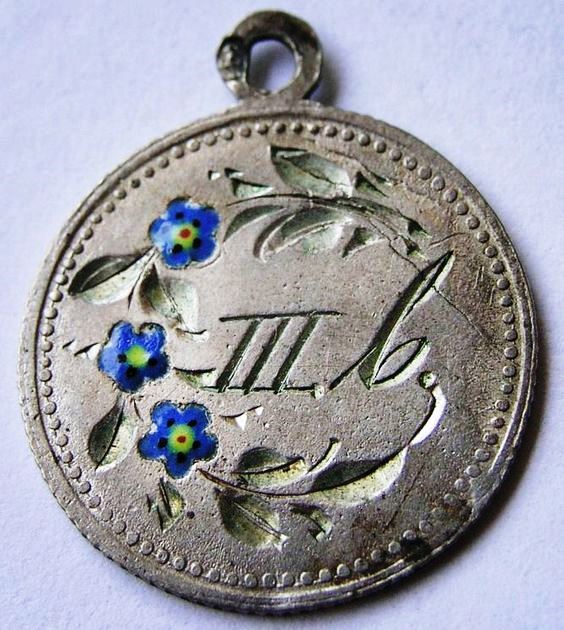 Love token featuring a purple and yellow pansy, representative of “forget me not.”

Floral love tokens are hard to find; and at times, even harder to decipher! For example, a rose can take on numerous meanings based on its color (according to the language of flowers). On the occasion that a coin depicts a rose but is missing color (enameled), the recipient might not receive the message as it was intended! Depending on color, a rose could represent beauty, love, and friendship to jealousy and infidelity. I wonder how many poor saps screwed that one up!

For collectors, there are a few love tokens that prove to be quite elusive. The least common love tokens are those that were enameled (black for “mourning” or blue for “true love”), embedded with stones or other metals, or cut into various shapes. Such tokens are coveted by serious collectors – much more than those with initials.

As I was researching love tokens, I thought, “If I were to have given my wife an old dime versus a diamond, what would she have done?” I suspect she may have given me a Marigold as a sign of her grief and despair, along with a Hydrangea for my heartlessness! But to put things in perspective, a silver dime in 1865 was precious metal (composition: 90% silver & 10% copper). Furthermore, silver was in fashion for women’s jewelry.

For those reasons, love tokens made their way into pins, bracelets, belts, necklaces and earrings for women, and cufflinks and pocket-watch chains for men. For example, a mother may have worn a love token bracelet, with tokens symbolizing her husband and each of her children. 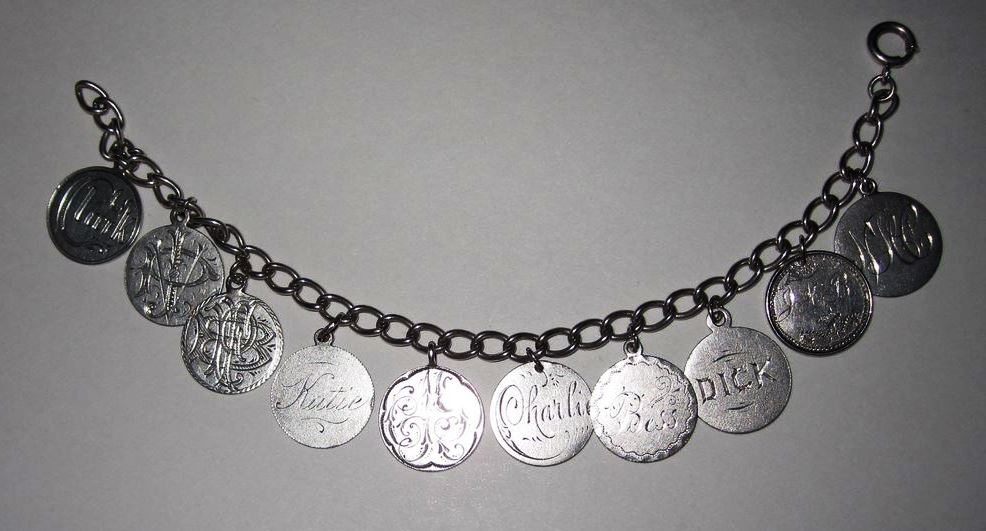 The popularity of love tokens sharply declined at the turn of the 19th century. Changing fashions had much to do with the decline. Silver’s popularity among the wealthy waned and photo lockets became all the rage. Love tokens found a small resurgence during the World Wars. In World War I, military men created “trench art” with spent military supplies such as artillery shells. On occasion they would also incorporated coins into their repertoire, engraving their name, unit number and where they were stationed into a coin. In World War II, some love tokens made their way into the mix of patriotic pins and pendants worn by women with loved ones fighting overseas.

As the 20th century progressed, fashion styles continued to evolve. Charm bracelets became en vogue, and officially took over the top spot for sentimental jewelry.  It wasn’t until 1982, until an interest in love tokens reemerged. However, the reemergence wasn’t due to people’s interest and curiosity of the love token; instead, it was another form of altered coins, Hobo Nickels.

Del Romines wrote the book on “The Hobo Nickel” in 1982, in which he documented the original works of “Bo,” his teacher Bertram “Bert” Wiegand, and an eccentric group of other hobo nickel carvers. Unlike love tokens, hobo nickels were created by altering the coin’s original image (Indian Head or Buffalo) and traded among hobos in early 20th century America.

When the extraordinarily talented artist Ron Landis exploded on the scene as a master coin carver, hobo nickels and other altered coins reemerged as a new niche of coin collecting and folk art. Collectors and coin carvers such as Andy Gonzales soon stumbled on love tokens and began to create modern-day versions of the classic Victorian-era love token.

You can see some of Andy’s amazing work here:

Today love tokens are collected by a small group of enthusiasts. Some seek specific relational names or initials, while others focus their collecting on the more intricate pictorial designs. Or it may just be a hopeless romantic looking for the next object to express their feelings for someone close to them. For me, I’m still on the hunt for the initials of the three ladies in my life, PAA, EGA, and JAA!