The most recognized Christian symbol is most certainly the simple sign of the Cross. Such symbols were prevalent in the early era of the Church, especially in the times of Christian persecution. Used to identify oneself as belonging to Christ, symbols were akin to a Christian password in times of persecution.

I’ve always been intrigued by Christian symbols, especially those that are found on battlefields or military campgrounds. How many soldiers far away from home, scared and frightened, found strength and solace while clutching a Cross or kissing a Crucifix dangling around their neck? It’s quite eerie to recover religious artifacts alongside implements of war. 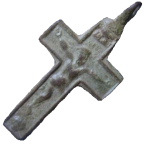 I’ve experienced that feeling twice before when I recovered a brass Crucifix and a St. Christopher pendant. The Crucifix was unearthed from a Civil War camp located in Stafford, Virginia. The camp was occupied by the Union army following the December 1862 Battle of Fredericksburg. The St. Christopher pendant was recovered from an area of Middle Tennessee that was used for WW2 training maneuvers. As the patron saint of travelers, the pendant was worn by a soldier preparing for war in Europe in 1942.

Those experiences have peaked my interest in religious artifacts – and the meaning behind them. So when I had the opportunity to visit San Diego, California, I decided to explore the rich history of Spanish missions located along the coast.

Probably the most recognized mission in the area is Mission San Luis Rey de Francia. Named for King Louis IX of France, its nickname was “King of the Missions.” Surrounded by present-day Oceanside, California, the Mission was founded by Padre Fermín Lasuén on June 13, 1798. It was the 18th of 21 Spanish missions built in Alta California of the Viceroyalty of New Spain. Alta California was an area encompassing present-day California and other states to the east. In 1822, Alta California became a territory in independent Mexico.

At its peak, the Mission’s structures, services, and agricultural land covered nearly 950,400 acres, making it “King of the Missions.” Today, the Mission is a National Historic Landmark, with the current church, built in 1811, standing on the same site as the previous two churches.

Prior to Spanish occupation, the area was inhabited by the Luiseño people. Homes were dome shaped, built with a thin cloth (tulles) that was draped over a branch frame. Villages were spread out along the valleys, streams, and mountains along the coast. Women tended to agricultural duties while the men hunted for animals and fish. Each village was guided by a chief and a shaman to ensure order.

Through years of world expansion, Spain had learned that land could be cheaply acquired through the establishment of a mission. The process of acquiring land was simple; form a mission, send padres to lead it, supplies to build and maintain it, and toss in a handful of soldiers for protection.

The Spaniards were very clever (cruel) in how they colonized. With a shortage of Spaniards in the New World, they decided to colonize with indigenous people – in this case, the Luiseño people. Home to nearly 3,000 Indians, the Mission tended to more than 50,000 head of livestock; cultivated grapes, oranges, olives, wheat, and corn, built irrigation channels, and constructed buildings using locally sourced material such as adobe, clay, and wood. By 1830, the Mission was the largest building in California.

Fun Fact: In 1830, the first Peruvian Pepper Tree was planted on the Mission’s grounds where it still stands today; as the first, and largest, Pepper Tree in the state.

Peruvian Pepper Tree (back right) planted on the Mission’s grounds in 1830.

After Mexico won its independence from Spain in 1821, the law of secularization was passed. Under secularization, each mission had 10 years to provide instruction to its inhabitants, after which they would be removed from Franciscan instruction, given Mexican citizenship, and assigned a portion of the Mission’s land.

When the law finally reached the Mission in 1833, various administrators did what government officials do best; they bamboozled the inhabitants, taking ownership of all their land and livestock, and leaving nothing to the Luiseños.

In 1846, the Mission was sold by Mexican Governor Pio Pico for $2,347. What remained of the property was divided; the buildings stripped of valuables and left to the elements. Soon after, the Mission had new inhabitants thanks to the Mexican-American War.

Among the first to arrive were the U.S. Dragoons under the command of General Stephen W. Kearny and Commodore Robert F. Stockton. They were sent to the Mission as part of their assignment to take possession of California from Mexico.

The famed Mormon Battalion set up camp in front of the Mission on January 27, 1847. The only religiously based unit in United States military history, the Battalion renovated the property, making its living quarters more agreeable. After six-weeks, the Battalion was replaced by U.S. soldiers who used the Mission as an operational base for the next decade.

As California took hold as a new state in 1850, the military presence at the Mission served as a menacing visual presence in the face of nearby Mexico. While occupied, soldiers were assigned to protect and repair the property. Other troops worked with local ranchers in dismantling dilapidated rooms to provide building materials for their homes. It was during this time that the Bishop of the Diocese of Monterey, California, petitioned the U.S. government for the return of mission properties to the Church.

On March 18, 1865, less than a month before his assassination, President Abraham Lincoln affixed his official signature to the title deeds and thereby returned the property of Mission San Luis Rey to the Catholic Church. However, after the military left the Mission, it lay abandoned until 1892.

In 1892, a group of Franciscans from Zacatecas, Mexico sought refuge in California and asked the Bishop for a site to relocate their mission. They were assigned to take over the San Luis Rey under the guidance of F. Joseph Jeremias O’Keefe. Over the course of 20 years, the church and its living quarters were repaired and rebuilt under Fr. O’Keefe’s leadership.

Although interesting, I was a little disappointed to find out that the skull and crossbones engraved into the cemetery entrance was created by Walt Disney. Yes, that Disney. They were used as a backdrop to the first season’s episodes of the Zorro TV series filmed on location in 1957.

Today, Mission San Luis Rey de Francia is a working mission. Ongoing restoration projects are carried out by the parish. The church, gardens, museum, cemetery, courtyard, and visitors center can be accessed by visitors.

Saint Christopher: A Soldier’s Saint
Disclosure: RelicRecord.com participates in Amazon Services LLC Associates Program, and other affiliate advertising programs, designed to provide a means for publishers to earn fees by linking to Amazon.com and affiliated sites.

The History Of Christmas Decorations