Several years ago, I recovered a Saint Christopher medal from the grounds of a WW2 training area in middle Tennessee. Immediately intrigued by the medal, its meaning, and why a solider would have worn it, I took a closer look at the relationship between Saint Christopher and the military.

Historically speaking, St. Christopher easily ranks as one of; if not the most, popular saints among Catholic and non-Catholic soldiers. This raises the question, why?

A Saint Christopher medal recovered by the author from the grounds of a WW2 training area in middle Tennessee. Several G.I. Dog Tags were also recovered.

Saint Christopher is considered the patron saint of travelers and of children (although he is not in the official canon of the saints). The saint is typically depicted as a tall, robust, middle-aged, bearded man with a staff, crossing a river with a child on his back. As the legend goes, he carried travelers across a turbulent, unpassable river. After he performed this service for some time, a child appeared and asked to be carried across the raging waters, in which Christopher obliged. As he began to cross the river with the child, the child quickly became a heavy burden.

When Christopher safely reached the other side, he asked the child “Child, thou hast put me in dire peril, and hast weighed so heavily on me that if I had borne the whole weight of the world upon my shoulders it could not have burdened me more heavily.” In which the child replied, “Wonder not, Christopher, for not only hast thou borne the whole world on thy shoulders, but Him who created the world.”—for the Christ Child, bearing in His own arms the great world had been Christopher’s burden. 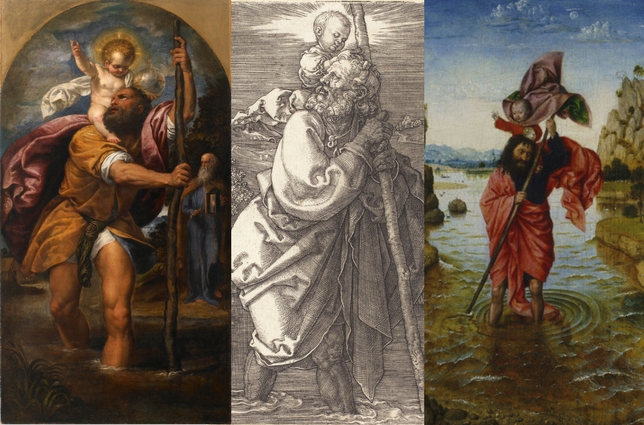 The legend also suggests that Christopher was a 3rd-century Greek martyr that died in defense of Christians during the reign of the Roman emperor Decius (c. 249-251).  In Greek, Christopher translates to “Christ-bearer.” However, the story of Saint Christopher has proven problematic.

Christopher was not mentioned in the Bible, and historical examinations of his story lead to conflictive conclusions about the man, his life, or if he existed at all. Due to these complications, the Catholic Church removed him from the official calendar of feast days in 1969.

Since the beginning of time, people from nearly every culture have adorned amulets. An amulet is defined as a small object worn to ward off evil, harm, or illness or to bring good fortune; protecting charm. In the times of the early Church (AD 1-300), the wearing of amulets was a popular pagan custom. Instead of fighting this practice, the Church simply sanctified the practice, with the understanding that by wearing a religious object, one was reminded of their relationship with Christ. For those that adorned a medal depicting a saint, such as St. Christopher, the medal would serve as a reminder to ask that saint for their blessing.

Throughout history, when soldiers venture into harm’s way, it’s common for them to carry good luck charms – anything that provides temporarily relief and comfort in a time of peril. Such things as pictures of loved ones, religious books or scriptures (Soldier’s Psalm), pendants, or anything else that signifies safety, home, or family.

During the Vietnam War (1956-1975) Bishop John A. Choi Jae-seon was known for giving Saint Christopher medals and Rosaries and giving them out to American G.I.s on R & R in Japan (also to GI’s stationed as peacekeeping forces in South Korea). The medals were inscribed with the Veterans Initials.

Based on our understanding of what Saint Christopher represents, along with the danger that soldiers face when fighting in unfamiliar and foreign lands, it’s easy to understand why so many of these religious medals are found where soldiers once were.