When milling about an antique store one lazy afternoon, I came across an assortment of red and blue discs, haphazardly displayed inside a locked curio case. About the size and thickness of a penny, made from fibrous material, and designed to look like currency, I soon learned these tokens—and millions more like them—once served a vitally important role in America’s wartime economy during World War II.

With the stroke of a pen, President Franklin D. Roosevelt established the War Production Board (WPB) in January 1942, with Executive Order 9024. “The WPB immediately directed the conversion of industries from peacetime work to war needs, allocated scarce materials, established priorities in the distribution of materials and services, and prohibited nonessential production.” 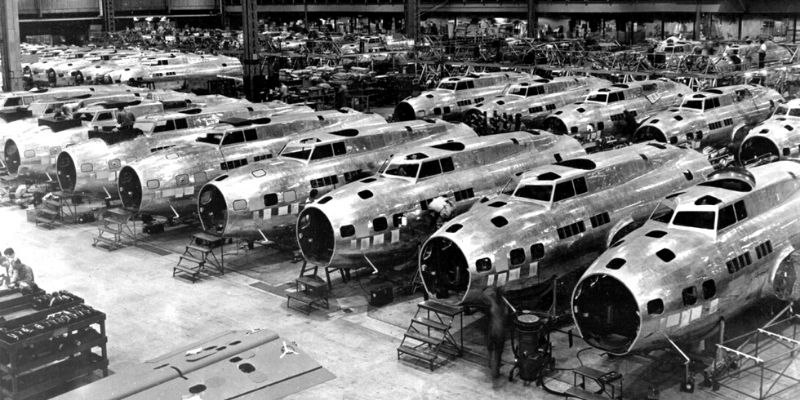 This is the first released wartime production photograph of B-17 Flying Fortress heavy bombers at one of the Boeing plants, in Seattle, Washington. (Credit: U.S. Air Force photo)

As industry shifted from peacetime work to wartime production, consumer goods grew scarce and inflation soon gripped the economy. In response, the Office of Price Administration (OPA) was granted the power to cap prices on everything excluding agricultural commodities, and to ration scarce supplies of other items. The OPA leveraged a variety of instruments in executing its power.

The most notable of these instruments, were War Ration Books (with OPA stamps), tokens, and chits, which were distributed to every American family. These instruments dictated how much gasoline, tires, sugar, meat, canned goods, coffee, silk, shoes, nylon, and other necessities any one person could buy.

In May 1942, the OPA started the process of freezing prices on virtually all consumer goods, starting with sugar and coffee. To administer pricing and distribution restrictions, some 6,000 local ration boards, staffed mostly by volunteers, were established across the country. On May 4, 1942, those volunteers distributed War Ration Book Number One, informally known as the “Sugar Book.” 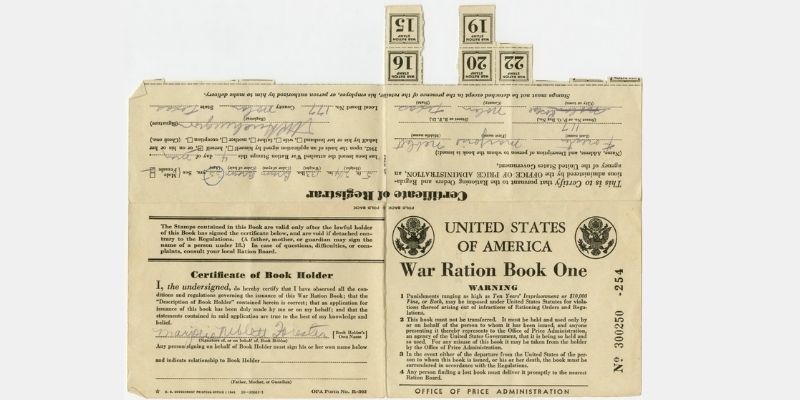 Ration book belonging to Marjorie Forester with a Certificate of Registrar added at the bottom of the folded document; the food stamps are attached to the bottom of the document and only five are left. (Credit: University of North Texas Libraries, The Portal to Texas History, https://texashistory.unt.edu; crediting Pioneer City County Museum.)

A grocer could not sell a person a rationed item without collecting the corresponding ration stamps. And once a person’s ration stamps were used for the month, she did not have the means to purchase any more items. 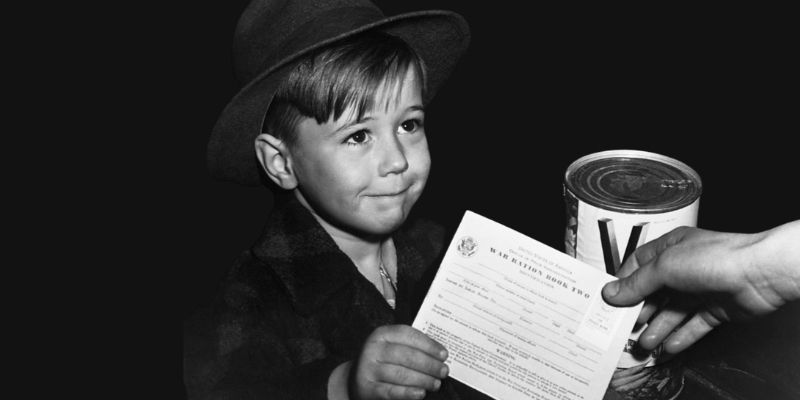 Such restrictions meant careful meal planning and no waste. In fact, the American Woman’s Cook Book issued a wartime edition that contained recipes, menus, and advice on getting the most out of what little food she had.

Some essential items, such as sugar, were rationed through a Uniform coupon rationing system, which provided equal shares of a single commodity to all consumers. Items rationed under this method also considered the number of people in each household.

The OPA also deployed Point rationing, in which the government issued points to each person, babies included, in the form of War Ration Books and OPA stamps. When purchasing restricted items, the consumer had to turn in their points (OPA stamps) along with hard currency. In turn, the grocer would submit the used ration stamps to the OPA for authorization to procure and replenish their stock. 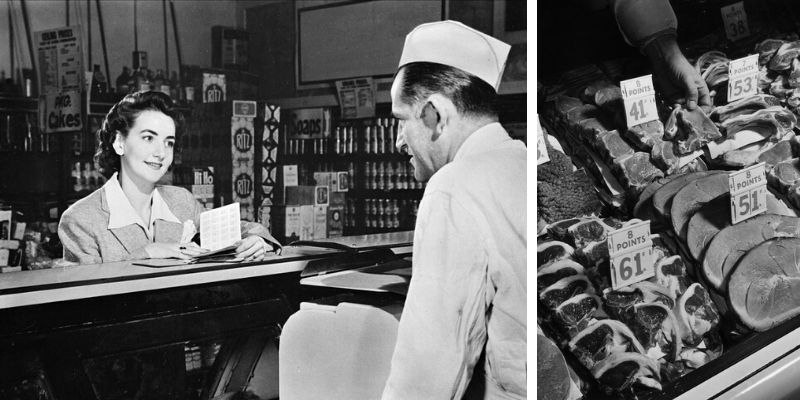 (Left) A young woman speaking with a butcher while clutching her ration stamps. Notice the price ceiling prices posted on the wall behind her. (Right) Meat cuts with ceiling prices and point values per pound displayed in butcher’s case. (Credit: Palmer, Alfred T., photographer. United States. Office of War Information. Library of Congress.)

Other items, like gasoline or fuel oil, were rationed only to those who could justify a need through a Differential coupon rationing system. Lastly, Certificate rationing allowed an individual to acquire restricted products, like tires and cars, only after an application demonstrated the need.

Due to Japan’s seizure of rubber plantations in the Dutch East Indies, rubber became the first nonfood item rationed under the OPA. Those plantations were responsible for 90% of America’s raw rubber consumption. 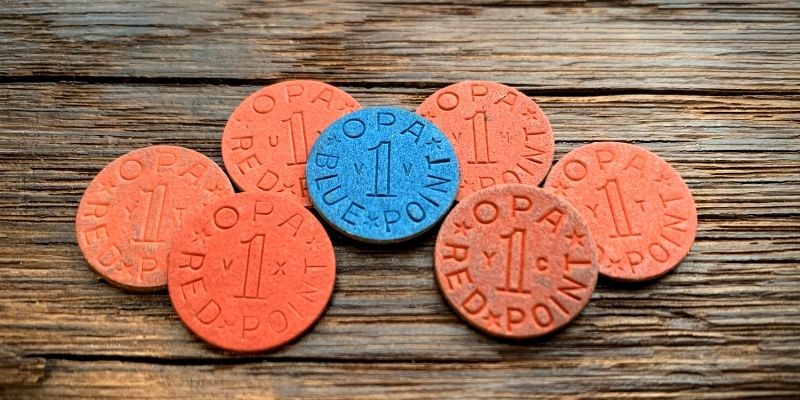 These WW2 Ration Tokens, also referred to as OPA Points, were to be given in change for OPA Stamps. (Credit: Tokens within the private collection of the author, Will Adams.)

Both red and blue tokens, 16mm in size, were made of celluloid, the first synthetic plastic developed in the 1860s. Due to a shortage of metals, celluloid offered the OPA a tough, moldable material that was cheap to produce and durable enough to withstand repeated use.

Each token displayed the number “1”, flanked on each side by a letter, and encircled by the words “OPA RED (or BLUE) POINT”. It is the letter combinations that matter most to collectors. 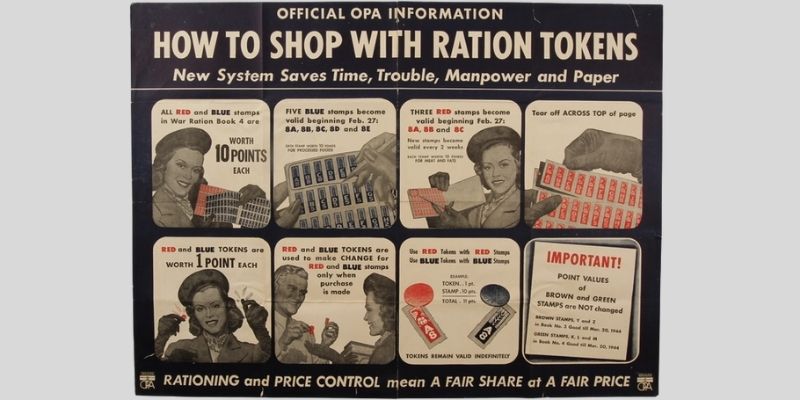 This WW2 Ration Tokens poster is part of the rationing program established by the Office of Price Administration in the US during World War II. It was mailed to food retailers who were required to hang it on the walls of their shop for public viewing. (Credit: United States Holocaust Memorial Museum Collection, Gift of David and Zelda Silberman.)

Most numismatists believe the letter combinations served no specific purpose beyond an anti-counterfeiting measure.

The harder to find (and more valuable) letter combinations are MV and MM for red tokens, and WH, CX and WC for blue tokens. Like traditional coinage, errors such “double-struck” or “off-center” tokens are worth more. As a class, red tokens are more common than blue.

Although the OPA’s pricing controls and rationing instruments continued, OPA tokens stopped being issued in 1945. As the war ended, the call for the rapid deregulation of the economy gained widespread support among conservatives and businessmen. The movement against “Over Priced Administrators” ultimately led to the defeat of many Democratic incumbents in the midterm elections of 1946, putting Republicans in control of Congress.

Following this defeat, President Harry S. Truman eliminated nearly all price and wage controls. While the OPA was authorized to exist until June 30, 1947, its purpose and authority was severely diminished by President Truman. By the end of 1946, most OPA ration offices would be shuttered and the OPA itself would cease to function soon thereafter.