In August of 1828, the editor of the Cincinnati Gazette, Charles Hammond, wrote: “General Jackson’s mother was a COMMON PROSTITUTE, brought to this country by the British soldiers! She afterward married a MULATTO MAN, with whom she had several children, of which number General JACKSON IS ONE!!!”

Those incendiary accusations levied against presidential candidate Andrew Jackson by a pro-Adams newspaper editor, illustrates the ferocity in which the venomous presidential election of 1828 was fought. In fact, one could argue that it was one of; if not, the nastiest campaigns ever waged in American politics. The candidates: Incumbent John Quincy Adams and the challenger Andrew Jackson. Their careers in public service were just about the only thing they had in common.

Adams was the son of the second President, Founding Father, lawyer, author, statesman, diplomat, and overall swell guy John Adams. John Quincy Adams lived the life of privilege. He was highly-educated, a world traveler, multi-lingual; and if the smug stare and pointed sideburns didn’t already give it away, he was very scholarly.

Jackson’s upbringing was quite the opposite.

Hotheaded, tough as Hickory, and prone to violence, Jackson scratched, clawed, and fought his way to success. At age 13, the Carolinian acted as a courier in support of the revolutionary cause during the American Revolution. Soon thereafter, he was captured and abused by the British army. By the age of 14, he was an orphan. He cobbled together an existence while leading the Tennessee Militia along the southern and western frontiers before becoming a national hero at the Battle of New Orleans during the War of 1812. The “common man” loved Jackson, electing him to the the U.S. House of Representatives and twice to the U.S. Senate. 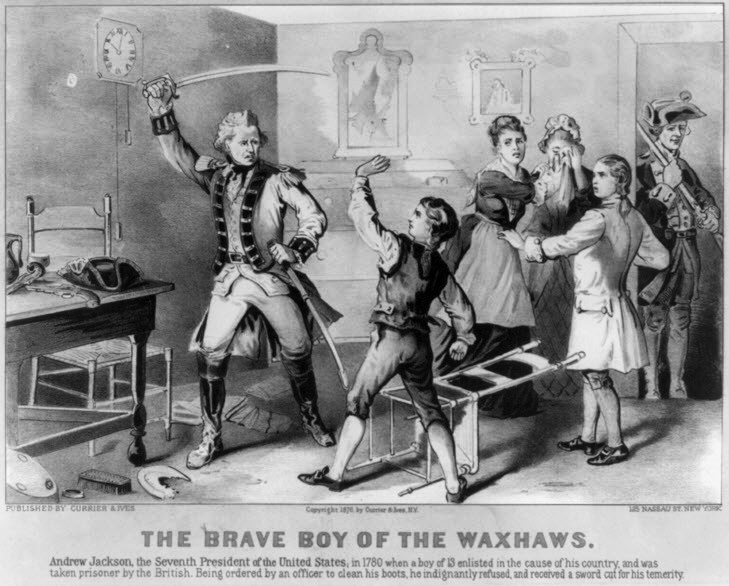 Andrew Jackson and his brother Robert were captured by the British and held as prisoners; they nearly starved to death in captivity. When Andrew refused to clean the boots of a British officer, the officer slashed at the youth with a sword, leaving him with scars on his left hand and head, as well as an intense hatred for the British.

The contrasting styles of the intellectual Adams and the quarrelsome Jackson were bound to clash. And boy did they…

The Presidential Election of 1824

The two candidates were no strangers to each other. They had previously tangled in the presidential election of 1824. Jackson had inched by Adams, winning the popular vote, but failed to capture the majority of electoral votes needed to secure the presidency. The race of 1824 had to be settled in the U.S. House of Representatives, where the seeds of future hostilities were firmly planted.

Once the outcome of the election was put in the hands of the House, an influential congressman from Kentucky, Henry Clay, threw his support behind Adams, lobbying others to do the same. Commonly referred to as “The Corrupt Bargain” by Jackson supporters, Clay was subsequently named Secretary of State by the newly elected President, John Quincy Adams. Game on.

The Presidential Election of 1828

For Jackson’s furious supporters, the 1828 campaign began straightaway. Recognizing that political influence would be critical in the next election cycle, Jackson worked doggedly to earn favor among voters around the country. Based on the 1824 election results, Jackson knew he could count on a strong showing from voters in the South and in rural areas. He also knew that it wouldn’t be enough next time around. Jackson needed his own Henry Clay. He turned to the New York political heavyweight Martin Van Buren. With Van Buren’s guidance and influence in the North, Jackson reshaped his image and earned the admiration of the blue collar voter in the North.

While Jackson was coalescing support across America, the Adams administration overreached with controversial policy initiatives such as the “American System,” that further infuriated Jackson’s growing allegiance of supporters. Defenders of the Adams administration referred to themselves as the National Republicans. In an effort to draw a clear distinction with those affiliated with Adams; the still rankled Jackson supporters aligned themselves with the moniker “Democratic Republicans,” or “Democrats” for short.

The growing political divide between the candidates and their devoted constituents quickly spiraled out of control, with nothing considered off limits. Military service, education, wives, and even mothers were fair game.

The Smear Campaign of Andrew Jackson

For those who opposed Andrew Jackson, they had plenty of material to work from. For starters, his hot temper and propensity for violence was legendary. Both as the challenger and the challenged, Jackson was no stranger to duels. But only one duel resulted in shots fired and a dead man. In 1806, Jackson challenged Charles Dickinson to a duel after Dickinson insulted Jackson’s wife. After taking a shot in his chest, Jackson shot and killed Dickinson. Jackson remains the only president to have ever killed someone in a duel…that we know of. 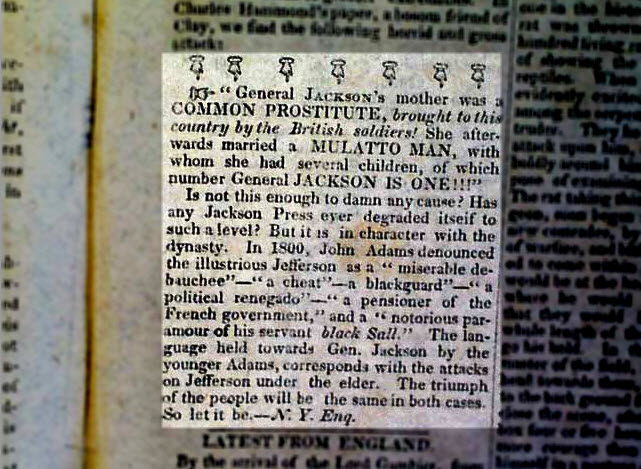 On the subject of matrimony, some of the most vicious attacks hurled toward Jackson were in reference to his marriage. When Jackson met his wife Rachel, she mistakenly believed that her first husband had divorced her. Jackson married her in 1791, although she was still legally married to her first husband. The Jackson’s resolved the legalities and they remarried three years later to ensure their marriage was legal.

36 years later, Jackson’s political adversaries were quick to bring this to the attention of the American public in the most salacious and slanderous ways possible. Jackson was barraged with acquisitions of adultery while his wife was accused of bigamy. If that wasn’t enough, they also said his wife was a “coarse-looking stout little old woman whom you might easily mistake for his washer-woman if it were not for the marked attention he pays her.”

Jackson had risen to national prominence based on his military achievements, with none more notable than the Battle of New Orleans. Despite his status as a national hero, his opposition viciously attacked his military experiences and smeared him as an executioner and murderer of American militiamen. A pro-Adams publisher in Philadelphia named John Binns, printed a broadside that featured coffins and scandalous stories of murder at the hands of General Jackson. The broadside became known as the “Coffin Handbill” – a term that became synonymous with a political smear attack. 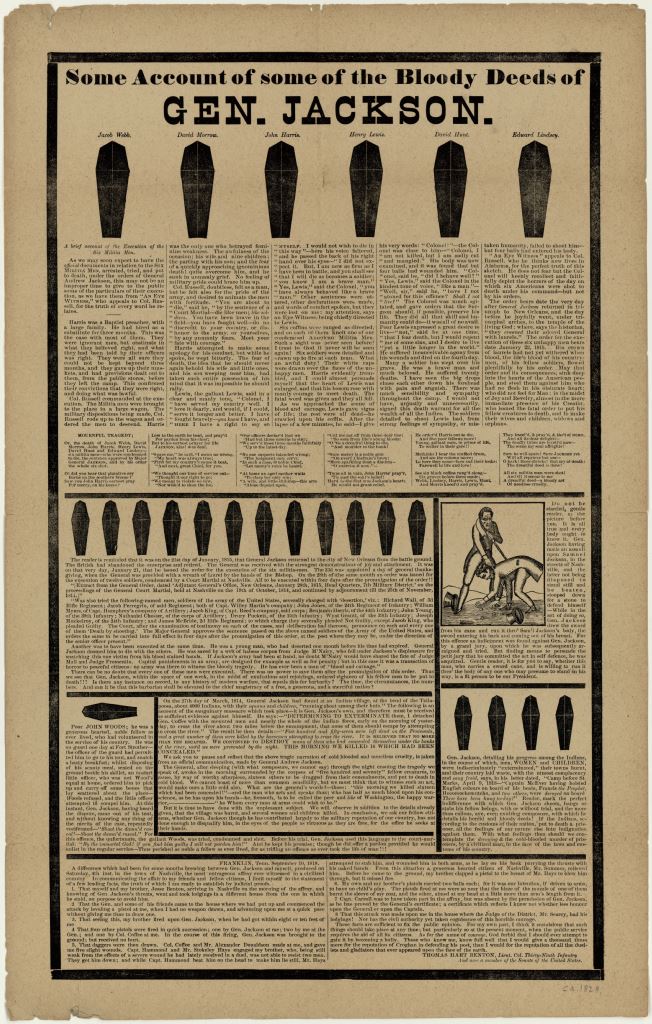 Infamous Coffin Handbill with “Some Account of some of the Bloody Deeds of GEN. JACKSON.”

The Denigration of John Quincy Adams

Jackson and his supporters wouldn’t let such personal attacks go unanswered. During his reign as President, Adams and his administration embraced and lobbied for federal programs designed to improve transportation infrastructure and tariffs to protect American industry. Jacksonians pounced on such policies as federal government overreach, calling Adams a “lordly, purse-proud” aristocrat “feeding at the public trough.” Adams was continually lacerated for being a pretentious, intellectual snob that couldn’t relate to the common man.

Not to be outdone by marital insults hurled at the Jacksons, his supporters accused Adams of having premarital relations with his “foreign wife” (Louisa was English) and for pimping out his chambermaid to the Czar of Russia while he was the Russian Ambassador. According to Isaac Hill, editor of the New Hampshire Patriot, the Czar fortunately found her “less voluptuous than his gorged appetite could relish.” From there on out, Jackson’s allies referred to Adams as “the Pimp.”

Jackson Wins the Election of 1828

The attacks on Jackson’s military career and his wife backfired. In the minds of many voters, Jackson’s exploits (true or false) as a brawler, dueler, and executioner proved that he could take the fight to the enemy and prevail based on his powerful self-will. Furthermore, many Americans blamed Adams for humiliating a devout wife and for violating Jackson’s honor.

Ultimately, Jackson’s status as a war hero and frontiersman was too much for the stiff-looking Adams. Jackson handily won the popular vote and the electoral vote. It came at a price, however. Having endured the harsh attacks on her and her husband’s character for too long, Rachel suffered two heart attacks and died before Jackson’s inauguration. 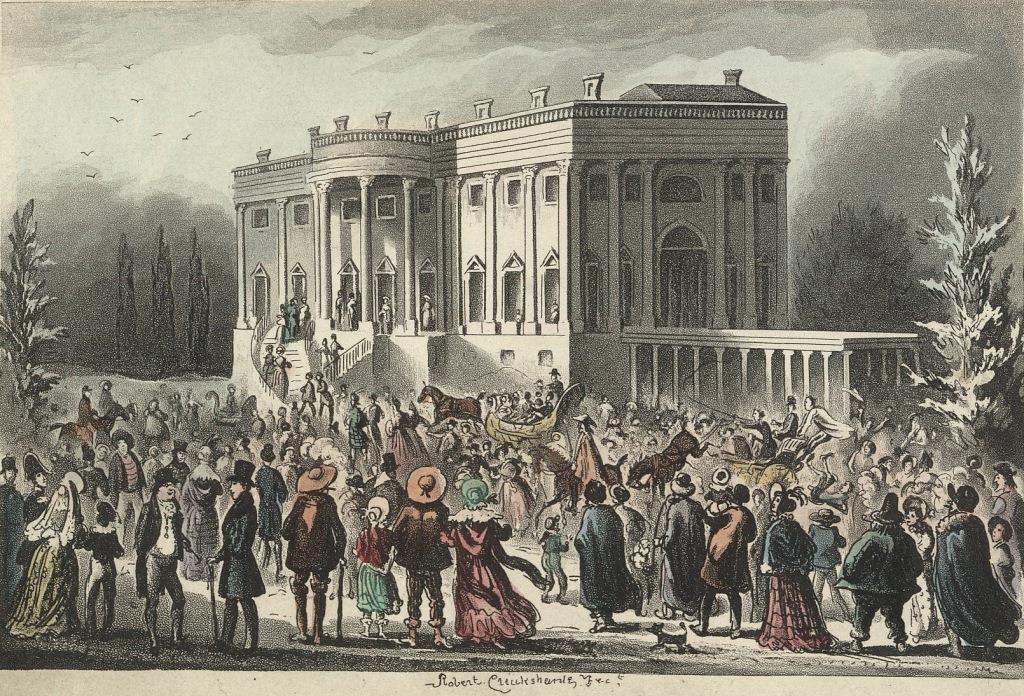 Jackson held Adams personally responsible for his wife’s death, saying “I can and do forgive my enemies but those vile wretches who slandered her must look to God for mercy.” As a well-educated man, Adams fled Washington before Jackson’s inauguration.