While Tennessee toasts Jack Daniel’s Whiskey, and Kentucky cheers Jim Beam’s Bourbon, neighboring South Carolina runs dry on notable liquor royalty. As America’s whiskey and bourbon men were mashing their way to fame and fortune at the turn of the 20th century, a conniving, one-eyed politician was cooking up his own elixir: a state-run monopoly on all alcohol bottled and sold within the borders of the Palmetto State, South Carolina.

Benjamin Tillman, an abrasive and unabashed white supremacist, gained statewide notoriety following his leadership role in the 1876 Hamburg Massacre; a riot in Hamburg, South Carolina in which six African Americans were murdered at the hands of Tillman’s paramilitary unit, the Sweetwater Sabre Club. 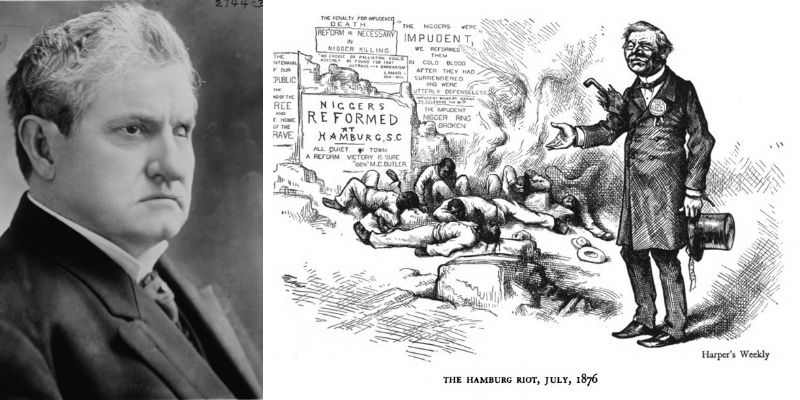 In his biography of Tillman, Stephen Kantrowitz writes, “As the commander of Edgefield County’s Sweetwater Sabre Club, a paramilitary unit dedicated to terrorizing Republican officeholders in South Carolina, the 29-year-old Tillman, with his red-shirted troopers, participated in the Hamburg Riot on July 8, an occasion marked by the murder of a number of black militiamen who had conducted a celebratory parade through the mostly black town of Hamburg, South Carolina, four days earlier. As Tillman himself would later put it, “The leading white men of Edgefield” had decided “to seize the first opportunity that the Negroes might offer them to provoke a riot and teach the Negroes a lesson” by “having the whites demonstrate their superiority by killing as many of them as was justifiable.” None of the perpetrators of the Hamburg murders were ever brought to justice.”

Tillman’s role in the riot sealed his reputation as a devout white supremacist, a cornerstone upon which he built a powerful political career, first as governor of South Carolina from 1890 to 1894 and then, for 24 years, as a United States senator.

Known for his venomous oratory, Tillman earned the nickname, “Pitchfork Ben,” following an 1896 speech in which he threatened to go to Washington and stick a pitchfork into that ‘bag of beef,’ President Grover Cleveland. Then a senator, Tillman was subsequently banned from visiting the White House.

On the other hand, he also helped establish Clemson University and Winthrop College; both of which have buildings (“Tillman’s Hall”) named in his honor. As a senator, he authored the first federal campaign finance law, commonly called the Tillman Act, that banned corporate contributions.

Among Tillman’s legislative feats, one stands alone in terms of having never been replicated in American history; a state-run monopoly that managed every aspect of liquor bottling, distribution, and sales within the state from 1893 to 1907.

Championed by evangelical social reformers who viewed alcohol as the root cause of poverty, fractured families, crime, industrial accidents, and other societal ills, prohibition sentiments spread rapidly in the 1880s. 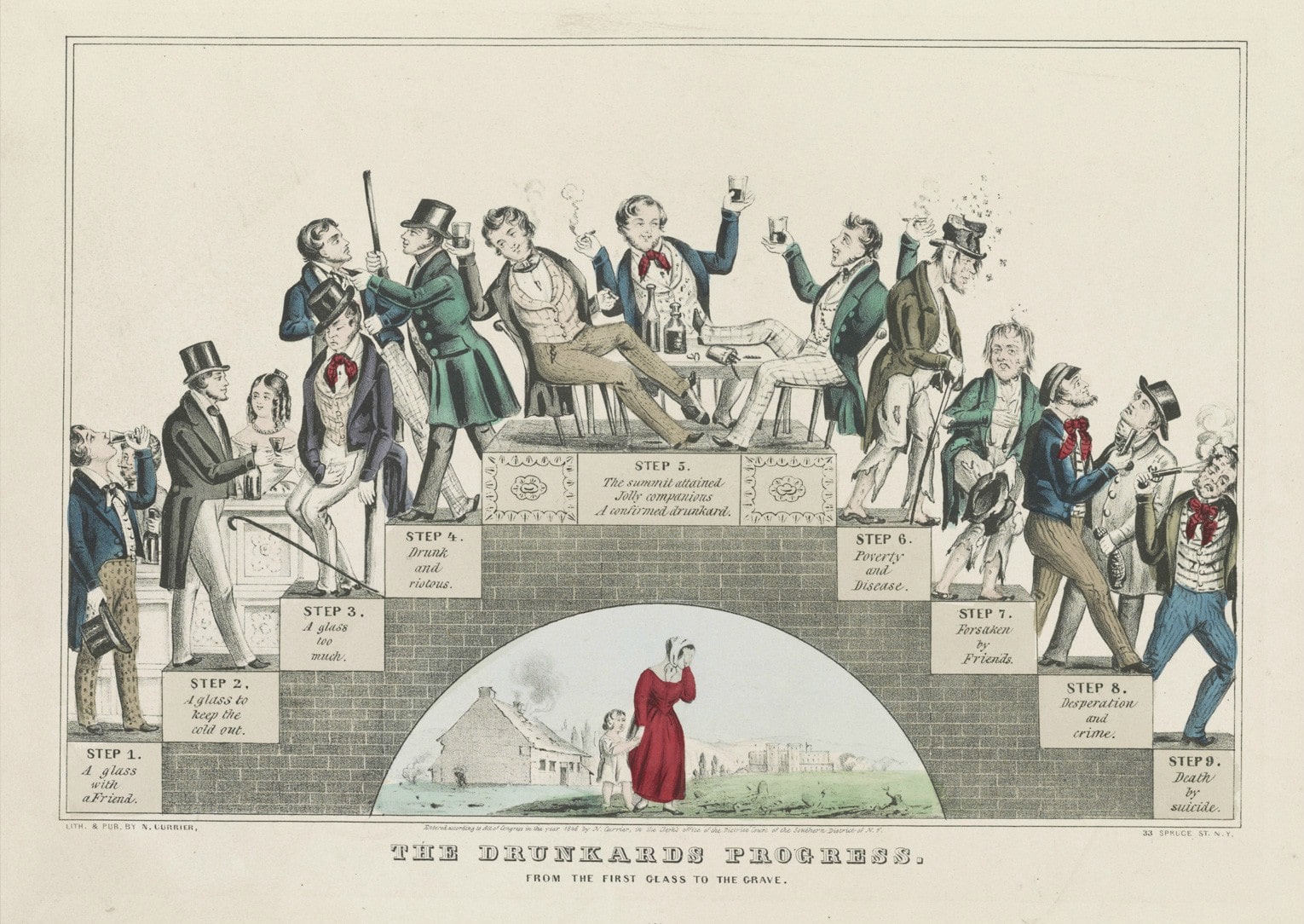 Having witnessed two narrowly failed attempts to pass prohibition bills, Tillman, the newly elected Governor, entered the fray with a proposal: he would close saloons and shut down liquor distributors throughout the state, but would make liquor, wine, and beer available through a tightly controlled state dispensary system.

At 5:30am, on the last day of the legislative session, December 24, 1892, the South Carolina General Assembly established the state dispensary system in a rush vote “… to prohibit the manufacture and sale of intoxicating liquors as a beverage within the state, except as herein permitted.”

Those that voted for the system recognized the opportunity to collect more revenue, amass more power, and secure future votes from the rural farmers whose grains were used to produce alcohol. The “wets”, or anti-prohibitionists, viewed the system as a better alternative to prohibition, whereas the “dries” saw the system as a step closer to their goal, absolute prohibition.

Tillman’s legislative action was a swift, decisive, and all-encompassing power play. All wholesale and retail sales of alcohol would be tightly controlled by the dispensary system, whose commissioner was hand-picked by Tillman. In turn, the dispensary would answer to a state board of control, whose leadership consisted of Tillman, his attorney general, and the comptroller.

Having been elected to office as the champion of farmers, Tillman directed the dispensary commissioner to procure all supplies from South Carolina distillers and brewers, knowing full well that his farmland supporters sold the grain used to make alcohol.

From 1893 to 1900, glass dispensary bottles were adorned by an embossed design that featured a palmetto tree, the state symbol, with crossed logs under the base of the trunk.

From 1900 to 1907, the dispensary changed its design to an overlaying and intertwining monogram of letters S, C, and D. This change was made at the behest of South Carolina Prohibitionists who strongly objected to having their state symbol associated with alcohol.

The most common bottle style is referred to as the “Jo-Jo” flask, a glass flask with flat front and back panels, rounded shoulders, and a rounded base. Either the palmetto tree, or monogramed design, is embossed on the front panel, with the latter being the most common. 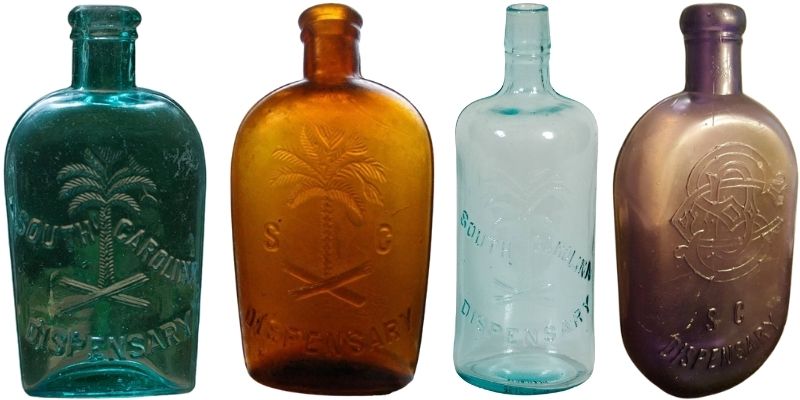 For the first nine years of the S.C. Dispensary, bottles were purchased from glass makers located outside the state of South Carolina. The first bottles produced within the state were manufactured by the Carolina Glass Company, located in Columbia. The most common glass makers marks found on S.C. Dispensary bottles are E.P. Jr & CO., P. BROS., C.L.F.G.CO., and C.G.CO. The most uncommon marks are DIXIE and OLEAN. 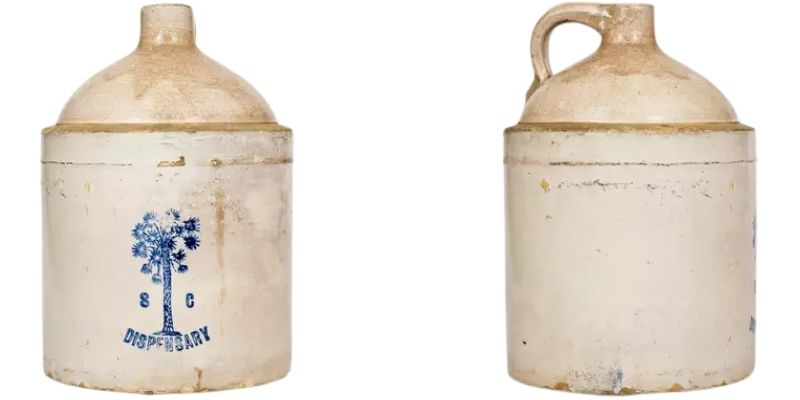 Stoneware jugs were also produced, with the palmetto tree design and S.C. Dispensary name stamped into the clay by hand after being wheel turned, then washed and baked with a clear glaze. Ceramic jugs are also known to have had the “S.C. DISPENSARY” crudely stamped into their sides. These jugs were made in half-gallon and gallon sizes in South Carolina and neighboring Virginia. Two- and four-gallon crockery jugs are believed to be in existence. 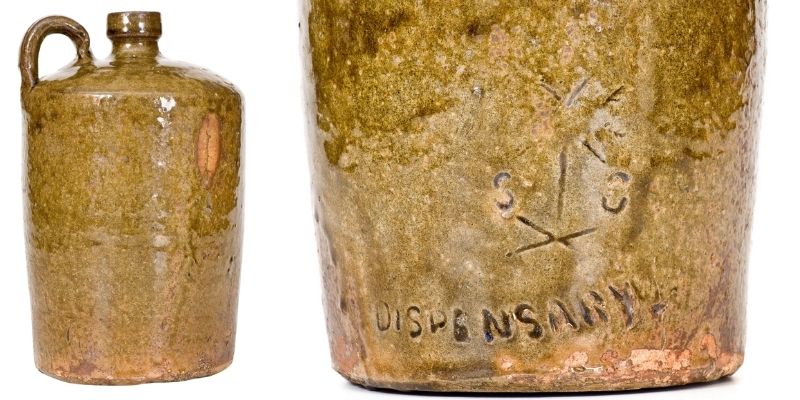 Death of the S.C. Dispensary

Awash in corruption and intoxicated by money and power, the S.C. Dispensary alarmed progressive reformers, evangelicals, and prohibitionists alike. Having never settled the debate between wets and dries and being called upon to dismantle the powerful state agency, the South Carolina General Assembly passed the 1904 local option law, Bryce Law, that empowered counties to opt out of the dispensary system and go completely dry.

As numerous rural counties voted to go dry, the viability of the state-controlled dispensary system soon came into question. In 1907, the Carey-Cothran law was passed that abolished the S.C. Dispensary and provided for the establishment of dispensaries in every county that chose to remain wet. 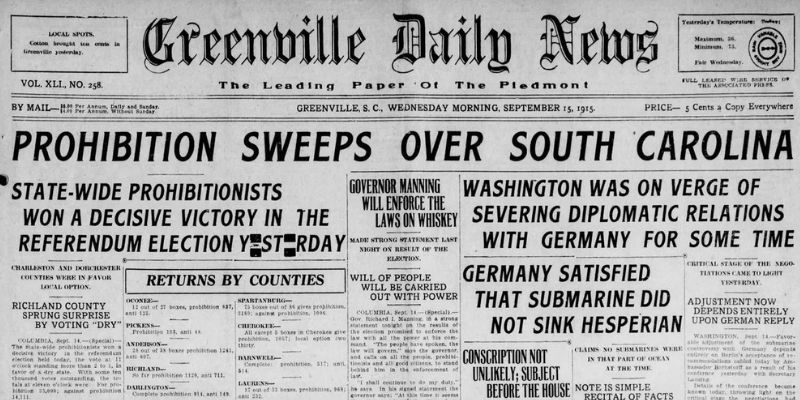 While some counties chose to remain in the liquor business, prohibitionist sentiments swept over South Carolina. A referendum held on the question of prohibition received two-to-one support from voters, spurring the General Assembly to enact a law in 1916 that banned the sale of alcohol throughout the state. The Federal Government followed suit in 1919 with the passage of the National Prohibition Act, banning the manufacture, sale, and transport of alcoholic beverages.

In 1917, the year following the abolishment of Tillman’s Baby, he suffered the first of several devastating strokes. Tillman died in Washington, D.C., on July 3, 1918, and was buried in Ebenezer Cemetery in Trenton, South Carolina.