In the antiques world, when someone says picker, the image of a distinguished, high-end art dealer doesn’t come to mind. Although they serve a critical role within the antiques trade, pickers are often considered to be the bottom-feeders of the industry. But why?

As I’ve come to learn, the term “picker”, and its uncomplimentary connotation, is steeped in the gutters and sewers of history. Henry Mayhew, the author behind the mammoth four-volume study of London Labour and the London Poor, points to two Victorian era (1837–1901) occupations that gave birth to the term “picker.”

During the mid-Victorian era, the rag picker, (Chiffonnier in French), sometimes called the rag-and-bone man, or bone picker, scavenged and collected items discarded in the trash, gutters, and streets of London. As one can imagine, this wasn’t a desired occupation, but rather a means of survival for those that had fallen on hard times.

The rag-and-bone man (and women) could easily be spotted by their soiled attire and distinct picking tools. When foraging through the grimy streets of London suburbs, a rag picker, wearing filthy clothing, would either have a greasy bag or a “mat-basket” slung over his shoulder. In their left hand they held a lantern, and in their right, a long stick with a barb or crook at the end, which was used to poke through trash in search of something to sell…or to eat. 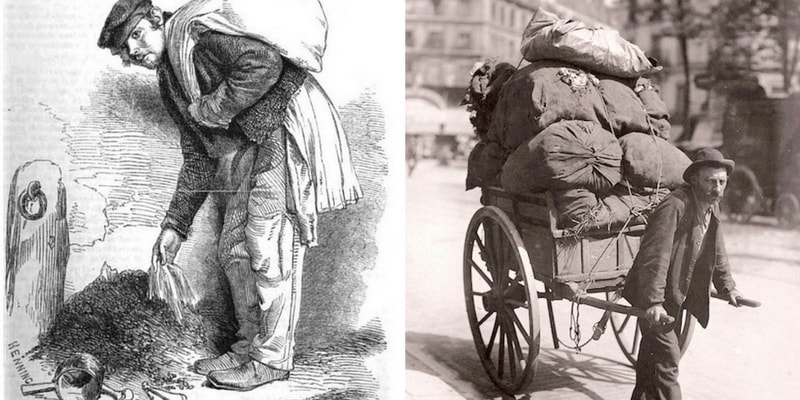 (Left) The Bone-Grubber by Richard Beard. Henry Mayhew described one bone-grubber he encountered as wearing a ragged coat … greased over, probably with the fat of the bones he gathered. (Right) A rag picker early in the morning in Paris, Avenue des Gobelins, Paris, 1899. By this time, the rag picker had traded-in his bag or basket for a cart.

Starting in the wee hours of the morning, rag pickers made their rounds through the suburbs. There they would rummage through trash heaps, turning their contents over and over, until piercing an object with the end of their stick, and then thrusting it into their bag or basket.

Not content with collecting rags and bones from which the picker derived his name, they were known to also collect paper, corks, nails, broken glass, human hair, and “even cats and dogs, which, contrary to the regulations, have been flung dead into the streets.” The fact was, if a picker thought something could be sold, they collected it by any means necessary.

Once their oily rag or mat-basket was full, they would make their way to “Rag-Pickers Paradise,” named for an area located in London’s Eleventh Ward, where hundreds of rag-and-bone dealers resided in dilapidated cottages.

Regardless of which rag-and-bone dealer a picker chose to do business with, the process in which he was paid was the same. The picker’s filthy collection was taken to a sorting room located inside the dealer’s cottage. There, they separated “white rags from the coloured ones, boots, bottles, and bones, each to their own heaps,” and then into “barrels, boxes, baskets and pans on the table, under the table, in chairs, and every corner of the room.” The picker’s pay was based on the type, and volume, of material they had picked. 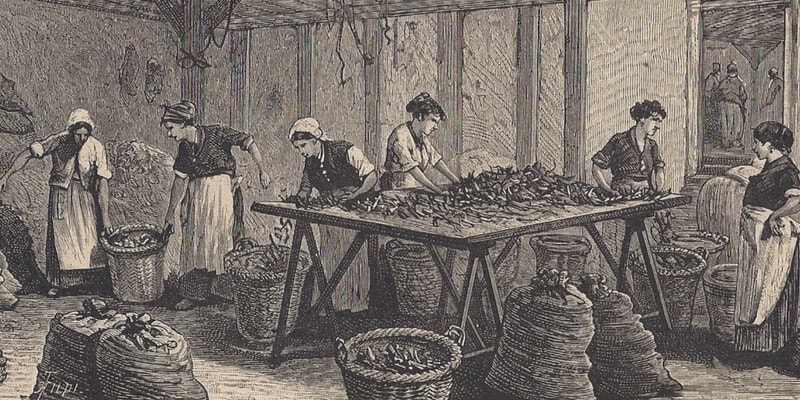 After the day’s sorting was complete, the rag-and-bone dealer sold the sorted nastiness to various merchants, who in turn, used the recycled materials to create a variety of new products such as buttons, knife handles, glue, fertilizer, soap, and other household items.

Rag pickers survived into the twentieth century, although by the mid-1900s most had vanished, having been replaced by more sophisticated recycling methods. It’s worth noting, that rag pickers still exist today in countries such as India.

Another type of “picker” associated with the Victorian era, was the tosher, or “sewer hunter.” Victorian London had a vast catacomb of over-worked sewers, flushing away the toxic waste of the crowded city.

Toshers practiced their profession in the dark and dank sewers underneath the city, wading and sifting through raw sewage, collecting the trash and scraps that washed down from the streets above: bones, rags, rope, and scrap metal―and when lucky―coins dropped on the streets above and swept into the sewer’s gutters.

Much like rag pickers, toshers were instantly recognizable. They wore canvas trousers, aprons with large pockets, and lanterns strapped to their chests. Their picking tool was a long pole with a hoe at the end. The hoe not only helped the tosher sort through piles of waste for lost “treasure”, it also served as a safety device. In the event of an unexpected flood of sewer water, or accidental slippage, the hoe could be used to latch onto firmer material, stabilizing the tosher. 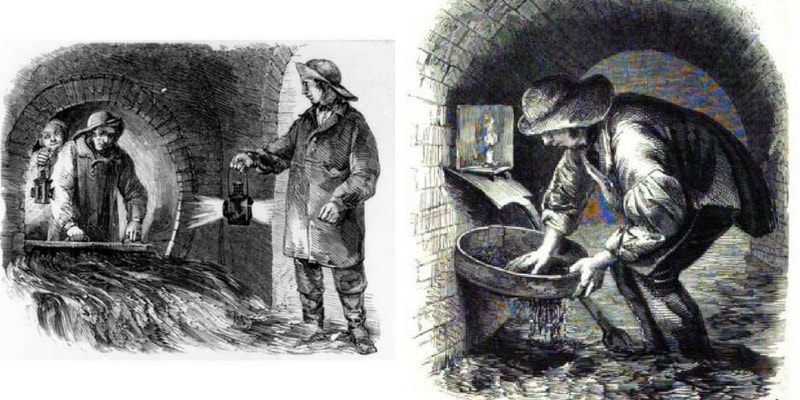 (Left) Flushing the Sewers, Illustration from ‘London Labour and the London Poor’ by Henry Mayhew, C.1840s. (Right) A tosher at work c. 1850, sieving raw sewage in one of the dank, dangerous and uncharted sewers beneath the streets of London.

Toshers typically worked in groups due to the dangerous conditions lurking around every bend of the sewer: toxic fumes formed lethal gas pockets, tunnels frequently crumbled, disease-carrying rats swarmed the cramped passageways, and the unannounced release of drains could send a powerful tide of sewer water over the heads of unsuspecting toshers.

After 1840, it became illegal to enter the sewers without permission, which drove out some, but not all sewer hunters. Many toshers were not deterred, as they continued to work the sewers late at night or early in the morning to avoid detection. The tosher slowly vanished over time – moving above ground to search the muddy banks of the Thames River.

Despite the vile and dangerous conditions, rag pickers and toshers managed to eke out a living, albeit a nasty one. While today’s picker doesn’t practice his trade in the sewer, he does carry on in the tradition of the rag picker and tosher, searching for treasure where others are afraid or unwilling to go. 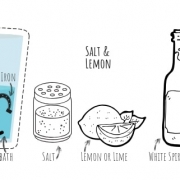 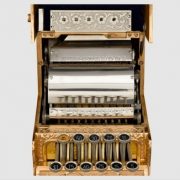 What Collectors Can Learn From Museum Exhibit Design
Scroll to top