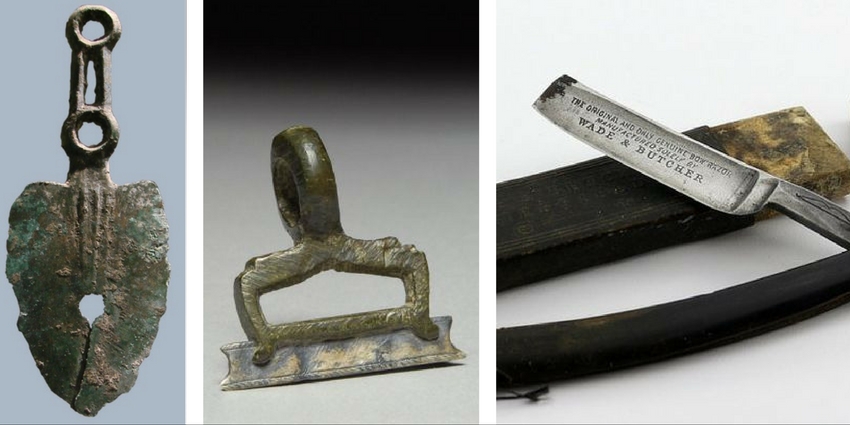 Our fascination with body hair—and its removal— has been a part of the human condition since the dawn of time. The practice of removing hair from one’s body (i.e. shaving); and the tools to do it, have evolved with every culture on every continent. Such history provides collectors of shaving gear with a plethora of tools and accessories to amass.

Shaving: So easy a caveman can do it

We know from prehistoric cave drawings (~30,000 BC), that the earliest humans used flint and clam shells to remove body hair. However, the tools acted more like tweezers than a razor—using two shells, the hair was pulled out! The tools gradually evolved into sharpened objects used to scrape hair off.

A razor made of bronze from the first Iron Age.

After thousands of years of horrible razor burn, the Bronze Age ushered-in much needed relief. Materials such as obsidian and copper were shaped into shaving tools, allowing for hair to be shaved from the body versus being plucked, much to the delight of the aforementioned caveman.

The Father of History, Herodotus (484-425 BC), scathingly noted that the Egyptians considered cleanliness to be more important than a pleasant appearance. The Greek historian said “Their attention to cleanliness was very remarkable, as is shown by their shaving the head and beard, and removing the hair from the whole body, by their frequent ablutions, and by the strict rules instituted to ensure it.”

Egyptian priests shaved their entire body “…every other day that no lice or other impure thing may adhere to them when they are engaged in the service of the gods.” The custom of shaving the head and face wasn’t limited to priests. It was commonplace among all classes. Unbeknown to the priests and Egyptian common folk, their dedication to servicing gods in purity also had its health advantages.

Sporting a Billy Ray Cyrus Mullet while taking long romantic walks along the hot and muggy banks of the Nile River would undoubtedly invite all kinds of disease and pests to take root in the moist hair. By going bald, they created a superior culture associated with health and cleanliness. 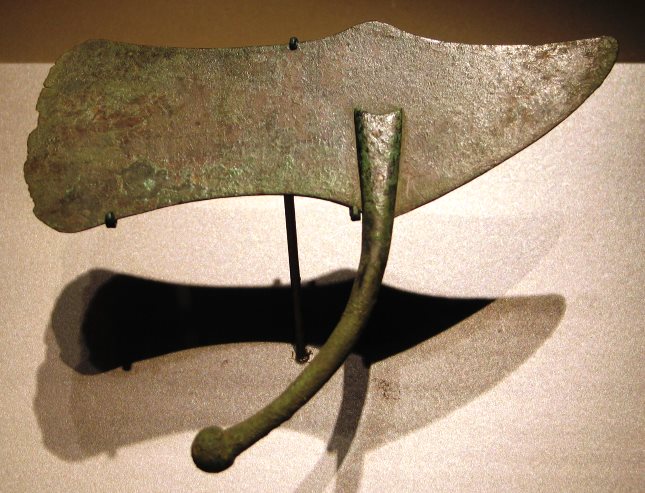 To achieve their superior baldness, Egyptians concocted the world’s first Nair product, applying the cream and then scrubbing their body with a pumice-like stone. Archeologists have also found circular bronze razors and hatchet-like blades in burial chambers, presumably left for the deceased to maintain a smooth shave in the afterlife.

Alexander the Great… Hairless One

On September 30, 331 BC, as Alexander the Great prepared his army for the impending and decisive battle with the Persian emperor for control of Asia, he decided it was time for shave—and he commanded his men to do the same. With that single, bizarre order, the faces of men were forever changed. 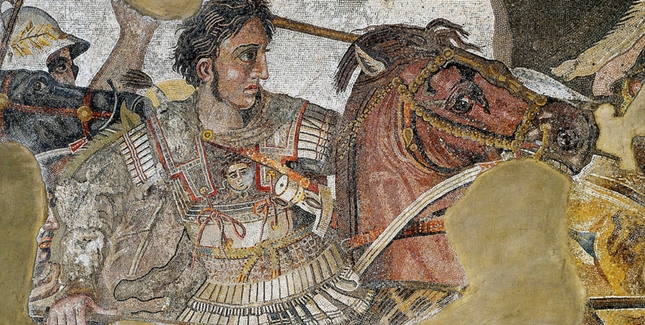 According to the ancient Greek historian Plutarch (45-120 AD), Alexander took three precautions prior to battling a Persian army 5 times larger than his own. (1) He made a sacrifice to the god Phobos (Fear), (2), instructed his commanders to tell the soldier’s that success depended on every man doing their job, and (3) when asked by his generals whether there was anything else that needed to be done, Alexander replied “Nothing, except to shave the Macedonians’ beards.”

There are two historical opinions as to why Alexander gave the “shave” command. The first originates from one of Alexander’s commanders, Parmenio. When he asked Alexander for the reason for the order, Alexander replied, “Don’t you know that in battles there is nothing handier to grasp than a beard?”

Plutarch seems to have agreed with Parmenio and put forth that account as the primary reason for the order. Other historians believe the order had more of a symbolic purpose versus tactical. They explain that Alexander himself had shaved and that he wanted his army to look more like him, providing a powerful psychological effect throughout the ranks. It seemed to have worked, as Alexander’s army defeated the Persians at Gaugamela. 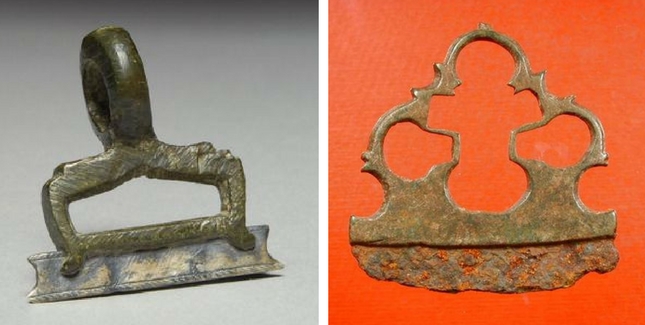 Alexander’s victory established a new cultural directive that didn’t include facial hair. The Greeks and Romans followed suit and to achieve the hairless look, they made modifications to the circular razor that originated with the Egyptians. They produced razors made of copper, iron, and on rare occasions, gold. They also straightened the curved blade, introducing the straight razor—a design that is still utilized in modern razors.

The Romans also popularized the barbershop. Similar to today, the barbershop (Tonsor) not only provided a service, it was also the place to meet for news and gossip.

Bearded Infidels of the Middle Ages

Driven in large part by religious customs and doctrines, shaving came in and out of style through the Middle Ages. Following the 1054 split between Eastern and Western Christianity, western clergymen advocated a shaved beard to distinguish themselves from their eastern counterparts, as well as Jewish and Muslim “infidels.” 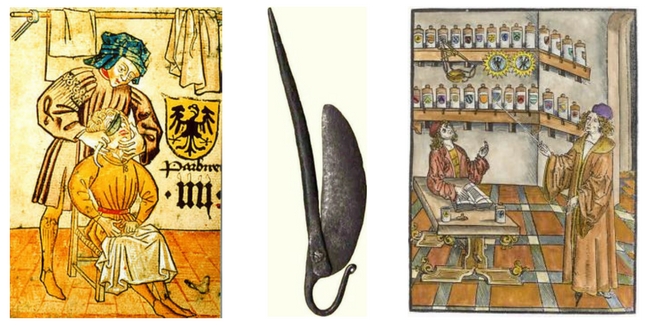 In 1096, the archbishop of Rouen (France) threatened to excommunicate anyone with a beard or long hair, not just clerics. Such religious motivation gave rise to the popularity of shaving—and shaving accessories—in the eleventh century. Creams, oils, perfumes, applicators, deodorants, and other accessories became exceedingly popular.

While advancements in technology and manufacturing helped to make razors sharper and safer, not much else changed between the Middle Ages and early Industrial Age. The most noticeable advances came in the form of the iconic Sheffield Straight Razor and the growth of the shaving cosmetics industry. 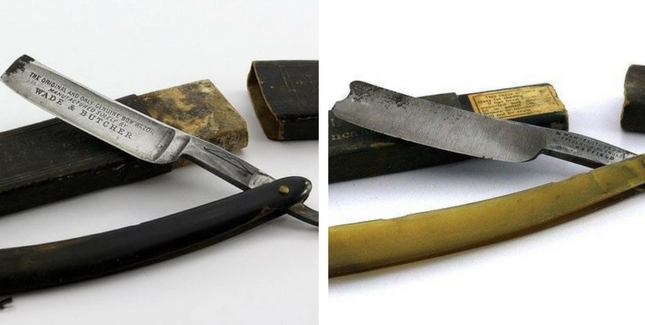 The first folding straight razors were produced by a Sheffield, England manufacturer in 1680. By 1740, Benjamin Huntsman popularized the straight razor by making decorated handles to hold his cast steel blades. The Huntsman blade became known as “Sheffield Silver Steel” due to its superior steel and deep shine.

Straight razors were the most widely used shaving tool throughout the 19th century.

During the rise in the popularity of the Sheffield Straight Razor, Frenchman Jean-Jacques Perret designed the first prototype safety razor around 1770. Perret believed there would come a time when men would want to shave themselves versus relying on a barber. To make the straight razor safer, he added a wooden guard near the edge of blade. 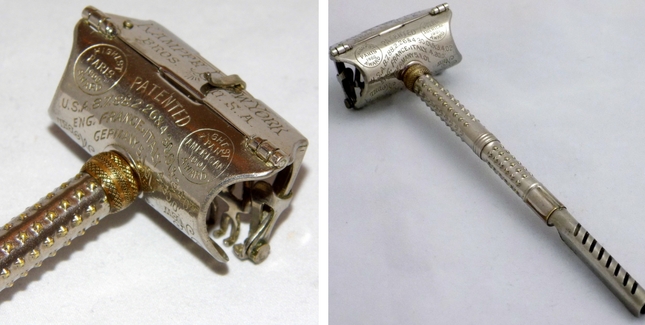 Nearly 100 years later, in 1880, the Kampfe brothers filed a patent for the first safety razor. The razor featured a removable handle, a shaving cream catcher head, and wire blade guard.

Arguably the most successful con job of all time: Replaceable Blades

Have you ever wanted to know who to curse when have to buy those costly replacement blades? His name is King C. Gillette. In 1895, the traveling salesman (go figure) conjured up the idea of a double edged, disposable safety razor that would never have to be sharpened. Egged on by an friend, he saw a way to make money by producing something that worked, but was cheap enough that people would have to buy it again and again.

In 1901, Gillette looked to MIT graduate William Nickerson to help him produce the concept blade in large quantities. Two years later, Nickerson figured it out and the first replacement blades were produced. 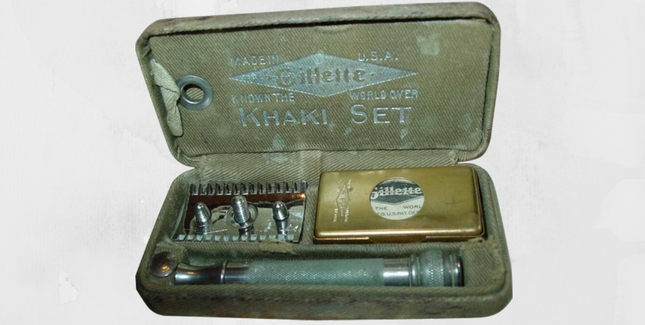 Like so many iconic American consumer brands, Gillette became woven into the American psyche when the US Army contracted Gillette to supply every WW1 American soldier with a Gillette safety razor. This helped make Gillette a household name and it’s a safe bet that one could find a Gillette razor in many bathrooms throughout America following the War. But what about the ladies?

As American men were growing fond of the Gillette razor, societal norms were shifting for women. Women began to expose more skin around their ankles; and wrists and by 1915, women athletes started to participate in the sport of swimming. To accommodate this, swimsuits were produced with much less fabric and exposed bare armpits. Gillette pounced and introduced the first razor designed for women, releasing the Milady Décolleté in 1915.

As competitors began to dabble with electric razors, Gillette remained focus on the replacement safety blade market. In 1960, they introduced stainless steel blades that remained sharp and rust-free for multiple uses. In 1971, Gillette revealed the first dual-blade razor, the Trac II, which reduced the amount of force needed for a smooth shave. If you’ve visited a shaving aisle recently, you know how this has evolved—multiple blades, vibrating handles, pivoting heads, lubrication, you name it.

While Gillette was busy perfecting the replacement razor, others were dreaming of more futuristic designs. On May 13, 1930 Jacob Schick patented his dry electric shaver. The design represented an evolution in Schick’s shaving inventions.

In the early 1910’s, Schick drew up a raw design that featured a shaving head driven by a flexible cable and powered by a softball-sized motor. His concept was rejected by manufacturers for being too bulky and impractical. Following his service in WW1, he developed the Magazine Repeating Razor, starting a company by the same name in 1925. This second iteration was based on the design of repeating firearms. Blades were sold in clips and loaded into the razor. 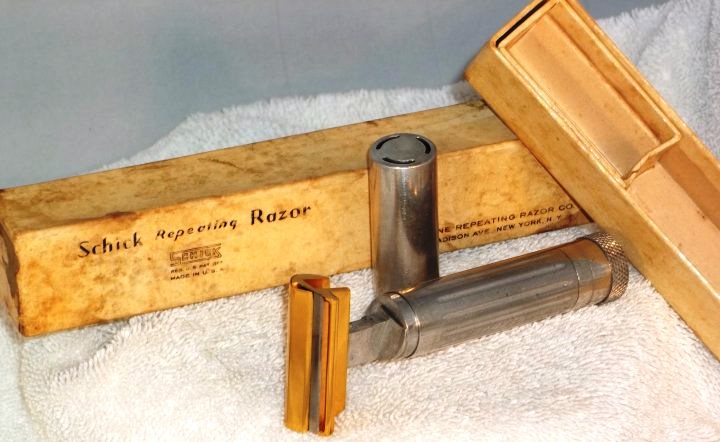 Ever the inventor, Schick continued wrenching on the design, finally settling on the Schick Dry Shaver, incorporating a new business by the same name in 1930; and on May 13, 1930, he filed patent No. 1,757,978 for the Schick Dry Shaver. As the business continued to grow, new models were introduced but the basic principles found in his original design have remained unchanged. In 1981, Norelco took over operations and continues to produce electric dry shavers. 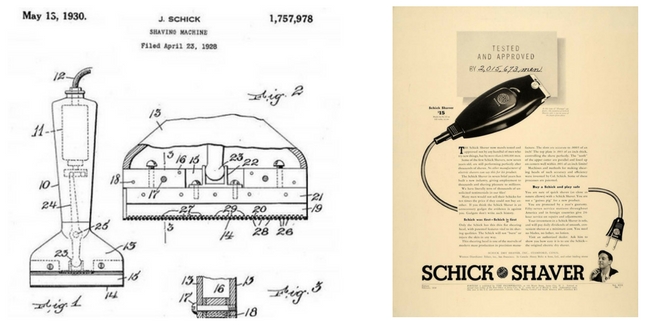 So there you have it – a brief history of shaving, razors, and the reasons why we shave.

The War between the Beards
2 replies