In all its whimsical charm, one place of interest is often overlooked. Perched on Thompson Island just off the southwest tip of Key West, rests Fort Zachary Taylor, one of more than 40 masonry fortresses constructed by the U.S. Army Corps of Engineers between 1830 and 1866 to guard the strategic coastal harbors of the United States.

Fort Zachary Taylor, The Gibraltar of the Florida Straits

For more than 300 years, the Florida Straits was the primary shipping lane between the Gulf of Mexico and the Atlantic Ocean, making it one of the most important waterways for commercial and military purposes of its time. The location of the fort, selected in 1822, was chosen to govern those waters.

Constructed between 1845 and 1866 of solid New England granite, ancient, impermeable limestone, and bricks provided by the Pensacola firm of Raiford and Abercrombie, Fort Taylor was a commanding three-tier structure with three, 495-foot long, five-foot-wide, seaward walls. Each level of the fort contained 42 cannons, each with a range of three miles, menacingly overlooking the harbor. Troop barracks with an 800-troop capacity, a large gunpowder magazine, and a sally port were all tucked securely behind the fort’s impenetrable walls. 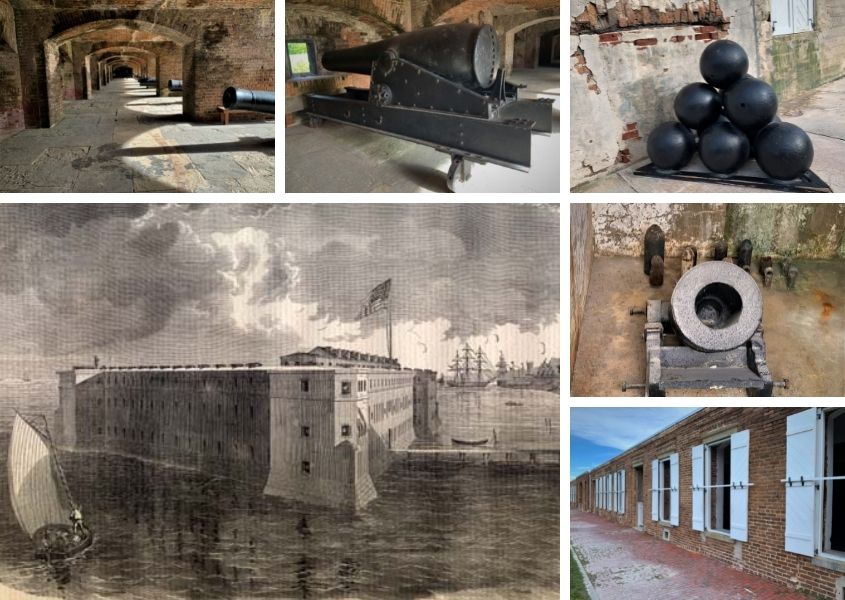 In November 1850, four months following his death in office, the fort was named for United States President, and Mexican-American War hero, Zachary Taylor.

On January 13, 1861, Union Captain John Milton Brannan was ordered to move his 44 men of the First U.S. Artillery from the Key West Barracks to Fort Taylor. There, he was tasked with defending the fort from falling into Confederate hands, which the fort never did. 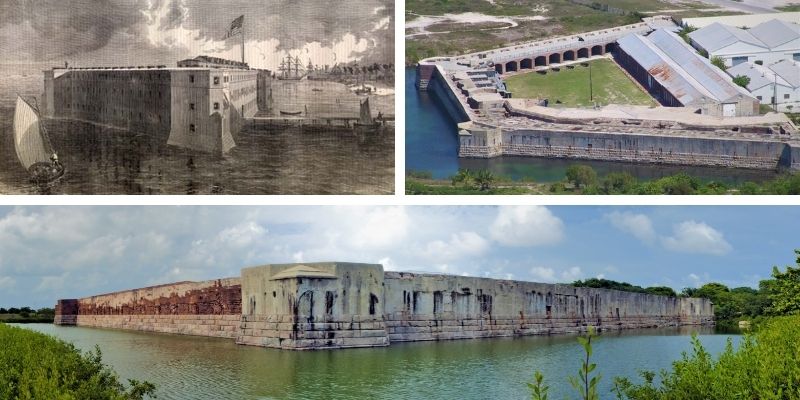 As the Civil War raged on, various Union Artillery, Infantry, and Calvary units served at Fort Taylor, where they successfully defended the Navy’s East Coast Blockading Fleet which was charged with preventing the flow of goods and war materials into and out of Florida, Alabama, Mississippi, and Louisiana. In its protection of the Blockading Fleet, Fort Taylor aided in the capture of more than 300 Confederate blockade runners, whose captured cargos were brought into Key West and sold at auction.

In 1898, the fort was reduced to a two-tier fortification, with two additional batteries added, Battery Osceola and Battery Adair. Under the direction of Lieutenant C.H. McKinstry of the U.S. Army Corps of Engineers, to save on both time and material expense, the fort’s Civil War-era cannons and armaments were used as fill when constructing the batteries. 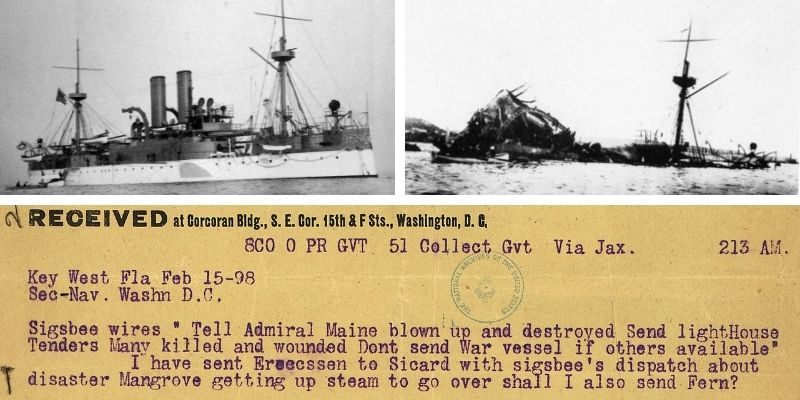 The fort also played a small, but significant role in America’s entrance in the Spanish-American War. In 1898, the U.S.S. Maine sailed from Fort Taylor to Havana, where at 9:40 p.m. on Feb. 15, it inexplicably exploded in Havana Harbor, killing 268 sailors, or three-quarters of her crew. “Remember the Maine! To hell with Spain!” became a rallying cry for military action against Spain, propelling the United States to war.

Following its continued use throughout World War I and II, the Army ceded control of the fort to the Navy in 1947, who in turn, used it as a salvage yard for the next quarter-century.

In 1968, after years of neglect, an article in the Miami Herald questioned the newly appointed Naval Base Commander as to why nearby Fort Jefferson had been a National Monument for more than 35 years while Fort Taylor languished as a junkyard. 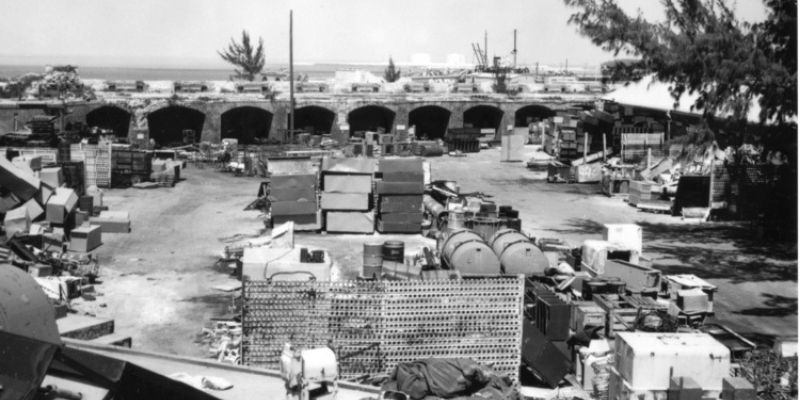 Following its transfer to Navy control in 1947, Fort Taylor was utilized as a storage and salvage yard for the Navy.

In response to public interest stemming from the article, the Navy tasked Howard S. England, the Naval Base Architect and Historian, along with his cohorts, Ida Barron, and Francis Delaney, to investigate the history and historical value of Fort Taylor.

Following months of research, the investigative committee returned its findings, noting that “Battery Osceola” had been radically modified in 1898 and that there were likely Civil War armaments buried within the fort. The team, led by Howard England, asked the Navy for permission to explore the site further, on a volunteer, after-hours basis. The Navy Base Commander granted England permission, but only if the exploration did not cost the Navy one red cent!

With the blessing of the Navy, the Key West native, former Marine, and civilian architect/engineer, Howard S. England, began to unearth civil war cannons and armaments buried within the fort’s walls.

In 1968, the fort was a dilapidated brick structure, a sad shell of its former glory, whose sole purpose was to now watch over the grounds of the Navy’s junkyard. That all changed on Saturday, December 21, 1968.

Howard England and his ragtag army of shovel ready volunteers went to work.

Using a crane operated clamshell bucket, the team began to remove material atop the fortification’s south wall. After hours of careful digging, the crane’s bucket struck something substantial. Moments later, the remnants of a large iron wheel and its Civil War gun carriage were revealed. 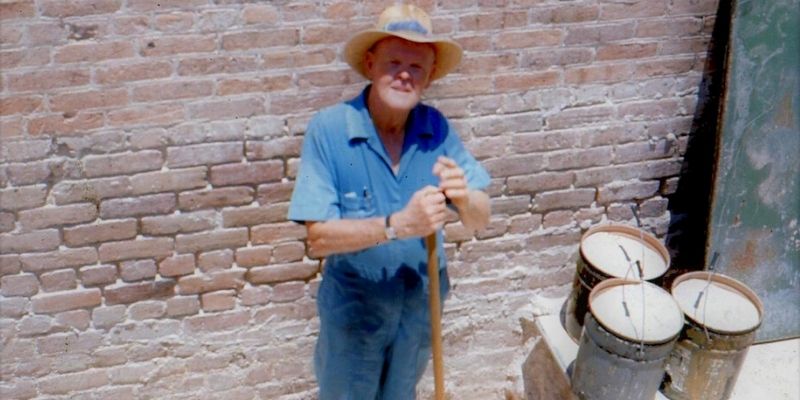 After more careful digging, the team was elated to find a hole in the floor directly underneath the gun carriage. The hole revealed a gun room, Room 13, that was filled with sand and debris. Using shovels, five-gallon buckets, and a roller-rail system, England and his team of weekend warriors would spend the next two years digging out Room 13.

In early 1970, while continuing to excavate Room 13, England and his team of volunteers returned to the top of the south wall where they unearthed the first of a pair of 10-inch Columbiads; a large-caliber, smoothbore, muzzle-loading cannon.

In Room 23, a cache of cannon balls and Parrot bolts were revealed, along with a 10-inch Rodman gun. 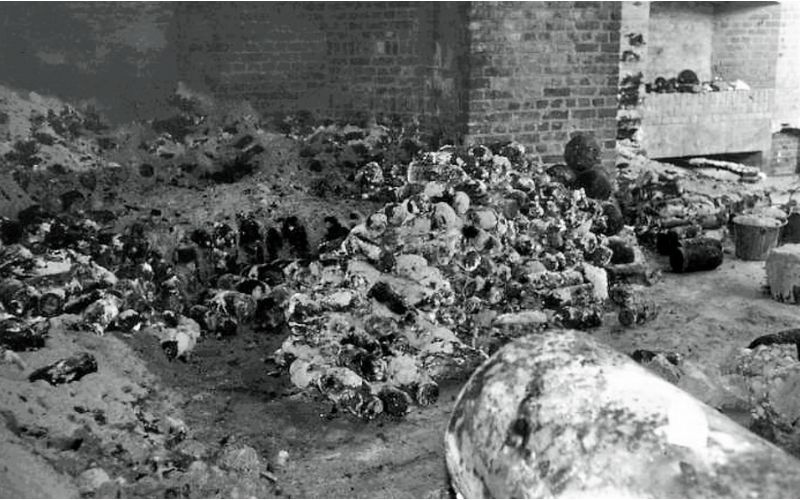 In the image below, note the black stains on the walls from the where the cannon balls and Parrot bolts were stacked, presumably in 1898. 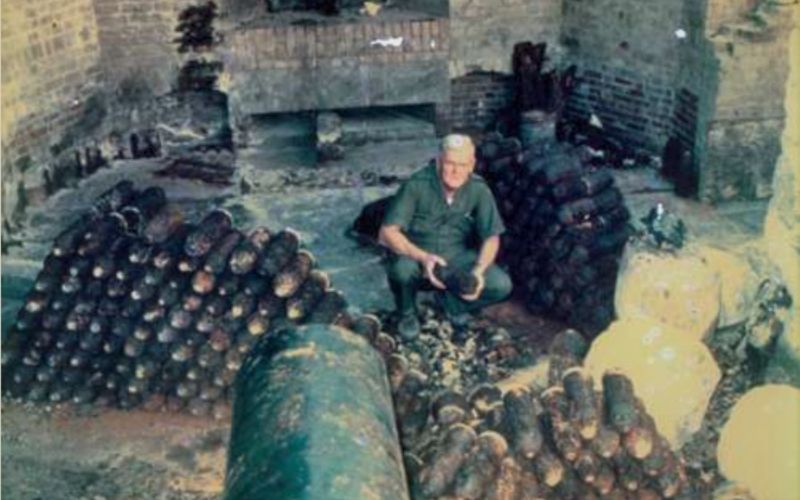 Over the course of eight-and-a-half years of back breaking work, Howard England, and his volunteer army of “Sand Hogs” moved some 50,000 cubic yards of rubble and fill, salvaging 20 Civil War cast iron cannons and more than 7,000 cannon balls and projectiles.

As the guns and armaments were discovered, they were cataloged, cleaned, painted, and put on display within the fort. While most of the cannons discovered were completely excavated and preserved, several were only partially excavated and can still be viewed today from atop Battery Osceola. 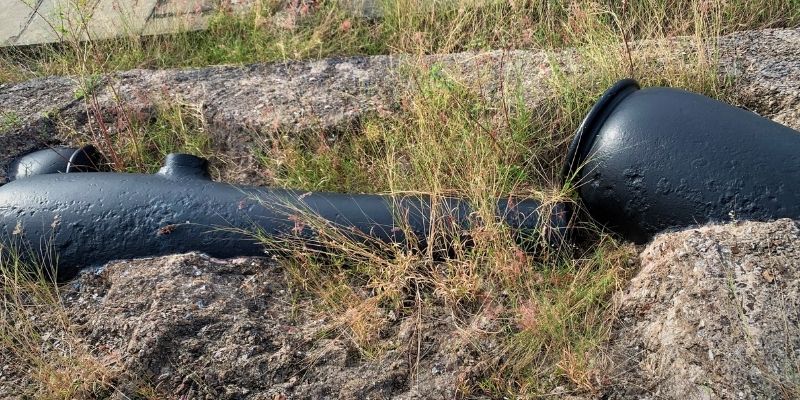 Partially exposed cannons, discovered by Mr. England, were used as filler in the 1898 construction of Battery Osceola.

The Department of the Interior turned the property over to the state of Florida in 1976, which immediately placed a moratorium on further excavations, regrettably leaving England’s lifework mostly unfinished. In fact, the moratorium is still in force today, as codified in the State of Florida’s Fort Zachary Taylor Historic State Park Unit Management Plan, that mandates the Park to “…avoid the excavation of additional artifacts and pursue research and non-invasive tests to determine the possible location and types of buried artifacts.”

On November 15, 1976, Howard England became an hourly employee of the State Park Service, and in 1978, was appointed the Park Ranger of Fort Taylor. With further excavations forbidden by the State of Florida, England turned his attention to planning for the new park that he and his volunteer army were so instrumental in making possible. 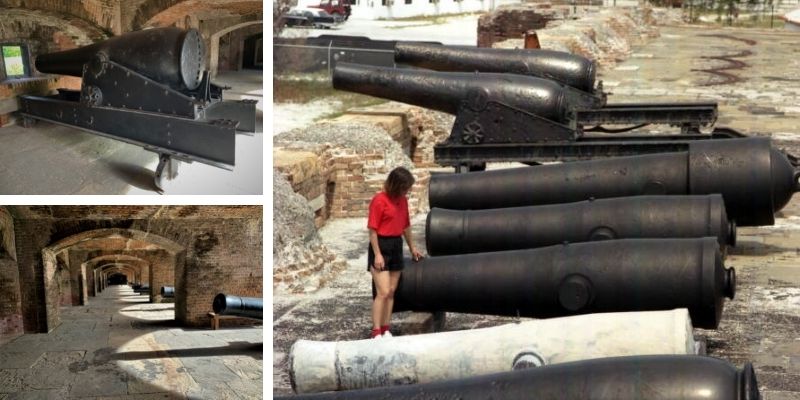 From 1976 when excavations were halted, until 1984 when he retired, England built more than 20 scale models of the primary guns and fort features spanning from the Civil War period to 1906. He was able to construct such detailed models due to his meticulous attention to documentation. Although England was not a formally educated archeologist, he dug each artifact with care, meticulously sketched it, and converted some into detailed engineering renderings.

RELATED ARTICLE: Loaning Items to a Museum? Here’s What You Need to Know.

When Fort Zachary Taylor Historic State Park opened in 1985, it boasted “The Howard England Museum of Coastal Artillery”, which showcased England’s scale models and many of the artifacts that he and his team recovered. Sadly, the museum is no longer operational due to ongoing environmental threats posed by hurricanes and salt exposure. The contents of the museum, including iron artifacts, artillery pieces, gun carriages and chassis, records, drawings, and England’s scale models, are now stored in Tallahassee until a proper, environmentally controlled museum can be constructed at Fort Taylor. 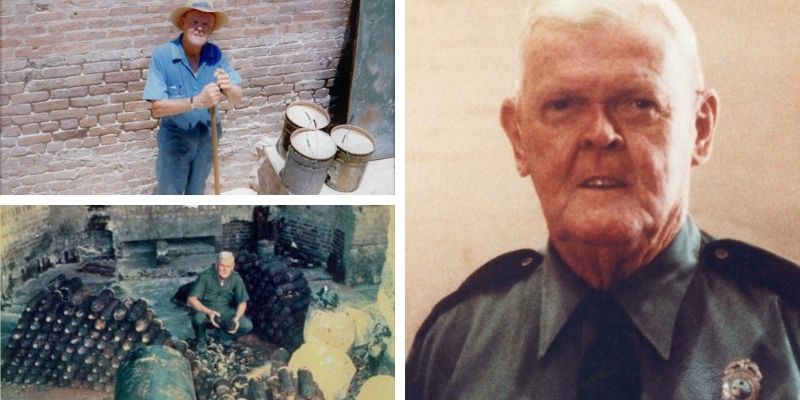 When asked why he gave so much of himself to Fort Taylor, his answer perfectly summed up the man,

“Someone had to do it, and I wanted to.”