Richmond, April 1 – Localities in Virginia are closer to having the power to remove Confederate ghosts from public spaces throughout the state.

The House version (§ 15.2-1812 | Loitering of Confederate Ghosts) says localities must offer to relocate ghosts to cemeteries, museums, antebellum homes, historical societies, haunted houses, or military battlefields for a period of 30 days before they can be legally be removed.

The Senate version does much the same, but with stricter provisions: a historic review of the ghost’s relevance to the area it haunts, a public séance period, and a requirement that the city’s governing body must have at least a two-thirds vote of approval to authorize removal.

The differences between the two bills will still need to be worked out.

But Democratic Gov. Ralph Northam, said earlier this year that he supports the idea. He says that Virginians “should be able to walk about freely, without having to feel ghosts of the Confederacy lurking behind them or be forced to hear them wailing in agony” and “that spirits of the past don’t belong in public spaces, but in haunted houses, where they can frighten visitors with tales of our terrifying history. Simply put, these grey ghosts do not represent today’s Virginian.“

Calls were placed for comment to the Warrenton gravesite of Colonel John S. Mosby, known as “The Gray Ghost” of the Confederacy, which had not been returned when this article went to press. Colonel Mosby passed away in 1916 and has kept a low public profile since.

State law has already restricted the movements of ghosts, displacing many from their favorite haunts. But cities including Charlottesville, Alexandria, Portsmouth and Norfolk have all indicated they want to capture and bury their ghosts once and for all; albeit with dignity.

RELATED ARTICLE: The Forgotten Brigade of the Civil War

Eugene Jackson, a Democrat activist from Norfolk, said in a speech Monday that his district overwhelmingly wants a “Johnny Reb” ghost removed from a downtown square.

“Every time I walk past the square — which is every day on my way to Starbucks for avocado toast and a tall Frappuccino — I have to stand my ground and tell old ‘Johnny Reb’ that he’s not welcome here. He just smirks and starts whistling that damn Dixie. Plus, like most Confederates, he’s not even wearing shoes. Lord knows what kind of phantasmal funk he’s got in between those decayed toes.These Confederate ghosts are a public health risk,” he said.

Republican lawmakers have long rejected calls to allow the controversial ghosts to be tossed out of public spaces. They say such short-sighted actions would erase history and the vehemence could quickly spread to other controversial conflicts, like the Women’s Suffrage movement of the early 1900s.

On the House floor Tuesday, Democrat Sally L. Hudson of Charlottesville said her city has been accused of erasing history.

“We’re trying to tell it,” she said, noting that most of the city’s Confederate ghosts did not appear until the era of Millennials, years after the Civil War.

“The appearance of these apparitions was a transparent attempt to intimidate a segment of our constituency who had the audacity to be offended by our history,” Hudson said.

Disenfranchisement of the Disembodied

“I do not believe this will end well. Democratic lawmakers will be haunted by their decisions for generations to come,” said Republican Del. Charles Poindexter, whose staunch opposition to the measure has gained him a reputation in the legislature as the “Ghost Bill Buster.”

Poindexter, of Franklin County, Va., said it should come to a vote of the people in the city, not the representative bodies.

“The disenfranchisement of the disembodied is not what the state of Virginia is all about,” he said.

One of the people Poindexter believes should decide the fate of Virginia’s ghosts is Bill Jackson, the owner-operator of Alexandria Ghost Tours. The small business owner is vehemently opposed to any measure that threatens the removal of ghosts.

“Not only does this threaten the lives of the undead, it’s a direct assault on my business and the livelihoods of my employees” and “for the past 20 years, we’ve gotten along just fine with the witches, ghosts, and demons of Alexandria. What these activist politicians are doing is downright scary,” the local business man said.

The Virginia General Assembly is likely to resolve the differences between the House and Senate bills later this year, with Gov. Ralph Northam signaling that he’ll sign the legislation into law.

April 1, 2020: No ghosts, monuments, or politicians were harmed in the telling of this ridiculous story. 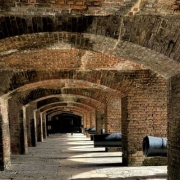 The Civil War on a Stamp
0 replies