While the United States honors its military veterans every year on November 11th, this year is of particular note, as it coincides with the 100-year anniversary of Armistice Day and Remembrance Day. Observed throughout Europe and Canada, these holidays celebrate the 11th hour of the 11th day of the 11th month of 1918, when the “war to end all wars” came to a merciful close.

In the United States, the sights and sounds of Veterans Day remembrances are familiar ones―parades, flags, wreaths, and moments of silence. In Europe however, many will honor those that paid the ultimate sacrifice with a distinctly simple, but beautifully powerful symbol: the red poppy.

A poppy is a flowering plant known for its striking floral blooms; and for its darker side, as the source for the crude drug, Opium. Left in undisturbed soil, the poppy plant’s seeds can lie dormant for up to 100 years. Needing light to germinate, the seeds will only grow when its host soil is disturbed.

War machinery, landmines, bullets, bombs, trenches, and graves scarred Europe’s picturesque landscape during World War 1. In the wake of war savaged terrain, millions of poppies pushed upward and gave bloom, creating a stark contrast between the horrors of war and the healing beauty of nature.

In 1915, an exhausted surgeon named Lt. Col. John McCrae, MD would capture in a single poem the striking resilience and beauty of the red poppy, his reverence for fallen comrades, and his intense conviction to carry on the fight in their honor.

(Left) This is believed to be the location where Major John McCrae wrote his famous poem In Flanders Fields after burying a friend, Lieutenant Alexis Helmer, on 3rd May 1915. (Right) John McCrae in uniform circa 1914.

After tirelessly treating the wounded and dying during the Second Battle of Ypres in 1915, McCrae sat upon the back of a medical field ambulance near a dressing post at Essex Farm, just north of Ypres. It was there that he gazed out upon the graves of those that had been killed in battle. One of the fallen was McCrae’s friend, Lt. Alexis Helmer. His burial, in a field blanketed by red poppies, inspired McCrae to write the poem, “In Flanders Fields.”

In Flanders field the poppies blow

Between the crosses, row on row

That mark our place, and in the sky,

Scarce heard amid the guns below.

We are the dead; short days ago

Loved and were loved, and now we lie

Take up our quarrel with the foe!

To you from failing hands we throw

The torch; be yours to hold it high!

If ye break faith with us who die

We shall not sleep, though poppies grow

Written on May 3, 1915, the poem first appeared anonymously in the British weekly satirical magazine, Punch, on December 8, 1915. McCrae was later attributed as the rightful author when the magazine published its annual index. 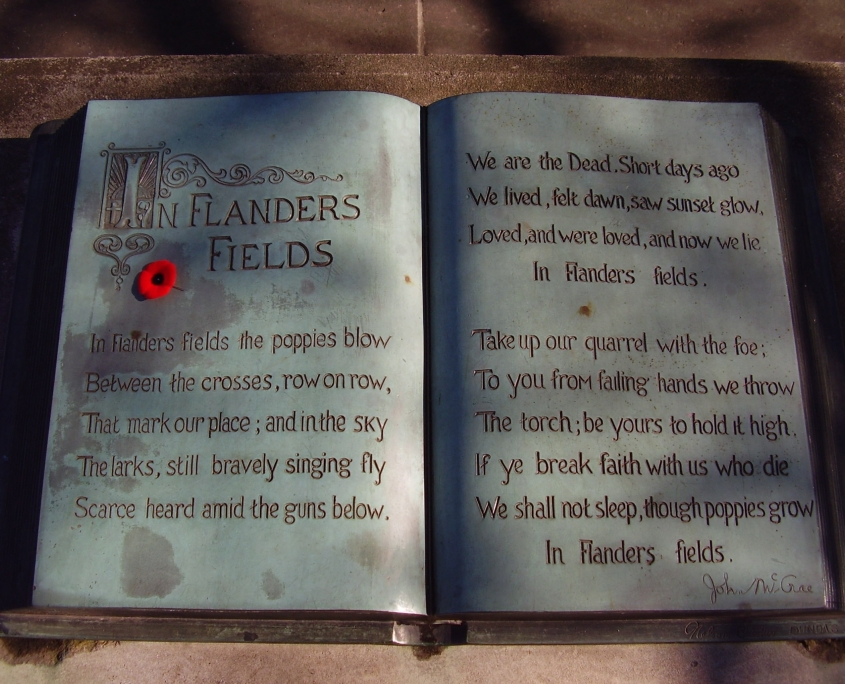 Inscription of the complete poem in a bronze “book” at the John McCrae memorial at his birthplace in Guelph, Ontario.

The poem quickly became one of the most popular of the war, printed extensively throughout Europe and the United States. Soon after its publication, Europeans and Americans alike wore red poppies; fashioned from silk and paper, to honor those who gallantly fought and died in ‘The Great War.’

Today―November 11, 2018―marks one hundred years since the close of the “war to end all wars.” Despite our somewhat comfortable distance from ‘The Great War’, the tradition of wearing a red poppy continues. 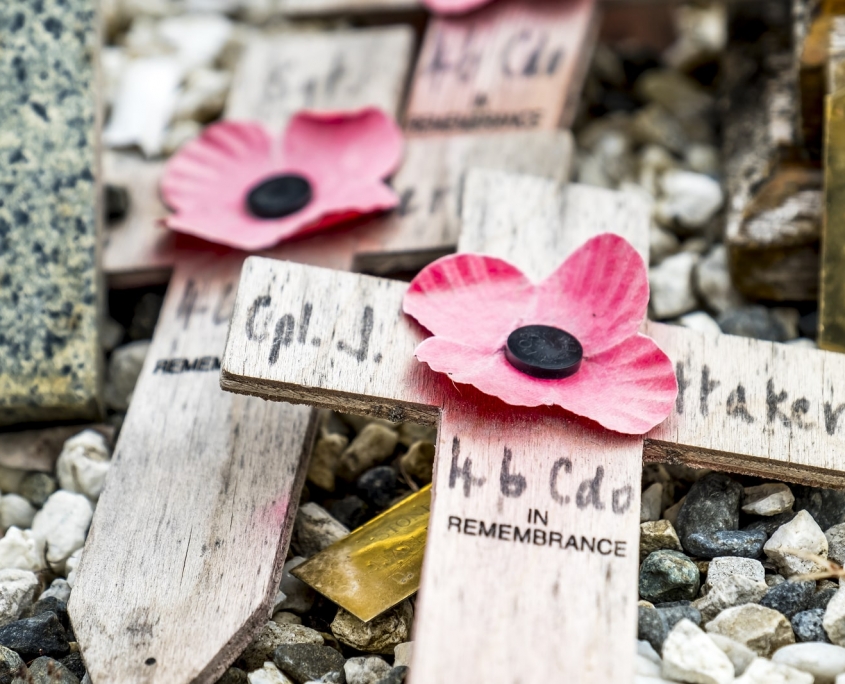 Spean Bridge, Scotland: Memorial place for the fallen with poppies and crosses in Scotland.

Not only will the red poppy be an integral part of Armistice Day and Remembrance Day (also called “Poppy Day”) commemorations, it will also adorn the breasts of many Americans, as we too remember and honor those that made the ultimate sacrifice for our freedoms.

While the red poppy symbolizes sacrifice, courage, and honor, it also represents forgiveness, healing, and new life. On this day, let us all remember those that bravely served, and those that courageously died. In their memory, let us learn, honor, forgive, heal, and strive to shape a world blanketed in beauty.

What Makes Collector Wine So Expensive?