The printing company opened in 1898 in Chicago, Illinois and shuttered its factory doors 80-years later, in 1978. The world’s largest printer of view and advertising postcards, Teich & Co. produced some of the most striking and iconic postcards of the 20th Century. 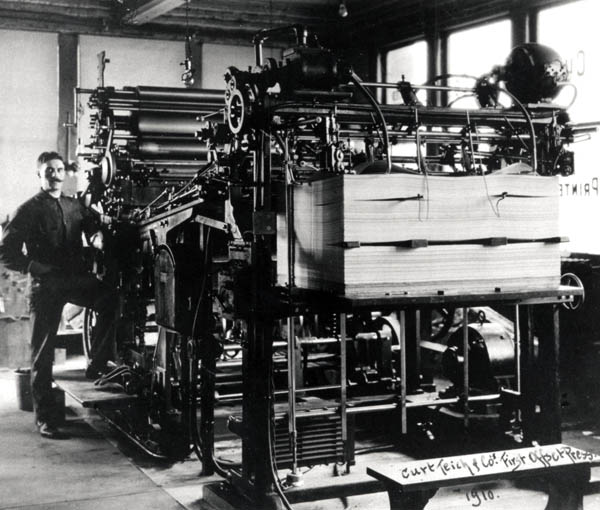 When the United States entered World War II, Curt Teich joined the war effort and used his large-format presses to print maps. In fact, Teich & Co. printed more than three million maps, including nearly half of all the invasion maps used by the U.S. Military throughout the war.

All of this great history has not been lost to time! Recognized as the world’s largest public collection of postcards and related materials, the Curt Teich Postcard Archives are part of the Lake County Discovery Museum in Libertyville, Illinois. The reason why this collection is so complete and well preserved is due to the company’s policy of well… saving everything – from copies of every image ever printed, to photographs, negatives, client letters, designers’ drawings and notes, material samples, and other production materials.

After taking a look at a few of Teich’s Postcards, you’ll quickly understand why it must have been a delight to have been greeted by a Curt Teich Postcard when one opened their mailbox!

Popular with dealers and collectors alike, here are a few resources that will prove useful in your research. For help dating Teich Postcards, check out the Curt Teich Postcard Dating Guide. To gain a better understanding of postcards from the Curt Teich era, check out the “Large Letter Postcards: The Definitive Guide, 1930’s to 1950’s,” written by Fred Tenney and Kevin Hilbert.

The History of Florida in Maps and Postcards
Disclosure: RelicRecord.com participates in Amazon Services LLC Associates Program, and other affiliate advertising programs, designed to provide a means for publishers to earn fees by linking to Amazon.com and affiliated sites.