As we navigate the present circumstances brought about by the pandemic, there has been a lot of talk about masks, who wears them, who refuses to, why, and why not. Having been on my mind lately, my thoughts about masks drifted in a different direction, towards Don Diego Vega, better known by his alter-ego, Zorro.

The Curse of Capistrano & Zorro

Hatched from the imagination of the American pulp writer, Johnston McCully, the masked hero first appeared in 1919, in the form of a five-part prose story, The Curse of Capistrano. Before being published as a book, the story was issued in five serialized installments in the pulp magazine All-Story Weekly. Best known for their lurid and provocative subject matter, pulps were the successors to the dime novels and penny dreadfuls of the 1800s.

Set in early 19th-century California during Mexican rule, The Curse of Capistrano was the story of a Californio man named Don Diego Vega, who takes on the masked persona of Zorro (Spanish for Fox) to fight for the poor and oppressed with only his swashbuckling charm and gleaming sword. 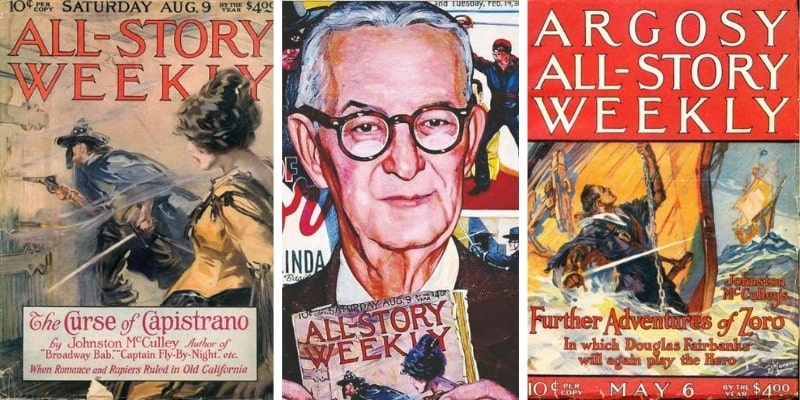 Like most pulp writers, McCulley borrowed heavily from a mixture of sources to develop the backstory, characters, villains, and the settings in which the story unfolded. In doing so, McCulley leaned heavily into the life and exploits of Joaquín Murrieta—a figure of disputed historicity.

Most of what we know of Murrieta (sometimes spelled Murieta or Murietta) comes from the pages of The Life and Adventures of Joaquín Murieta: The Celebrated California Bandit. Published in 1854, the book is widely considered to be one of the first novels written in California and the first to be published by a Native American.

Writing under his Cherokee name “Yellow Bird”, John Rollin Ridge spun a fanciful tale of a bandit named Joaquín Murrieta. While seeking his fortune in California during the Gold Rush, Murrieta becomes consumed with violent rage after being subjected to unspeakable racism, scorn, and violence at the hands of American miners and criminals. 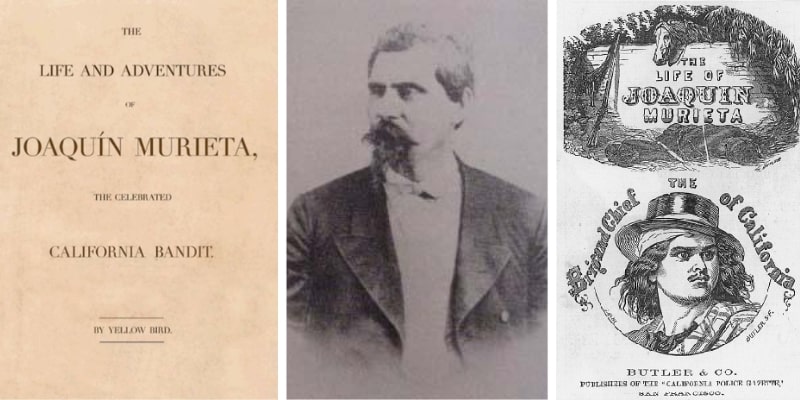 Born in Sonora, Mexico, Murrieta traveled to California at the age of 18 in the hopes of a better life. Having admired America from afar, Murrieta was eager to assimilate into his new country. A devoted husband, Murrieta and his young wife settled into the hills of California. As his wife cared for their modest home, Murrieta panned for gold.

Being one of the first prospectors to settle in the area, Murrieta freely roamed the hills in search of gold without interference from rival prospectors. Unfortunately for Murrieta, his timing could not have been worse.

To the Victor Go the Spoils

In January 1848, the revelation that gold had been found in Coloma, California, brought an onslaught of fortune-seeking Americans to California. A month later, the 1848 Treaty of Guadalupe Hidalgo ended the Mexican-American war and enforced the Mexican Cession of the northern territories of Alta California and Santa Fe de Nuevo México to the United States.

As Yellow Bird tells the story, a group of men, emboldened by America’s conquest over Mexico, confronted Murrieta and his wife at their home. Asserting that Murrieta’s land, prospecting claims, and even his gold, were now property of America, the menacing marauders demanded that he forfeit it all. When Murrieta refused to fork over what he believed to be rightfully his, the intruders beat him, tied him to chair, and forced him to watch the brutal sexual assault of his wife—an assault so vicious, that she later succumbed to her injuries.

Having lost his wife, his home, and his gold, Murrieta turned to card dealing to make ends meet. Working in saloons among drunkards, his disdain for American men only worsened. Following a visit with his half-brother, Murrieta borrowed his brother’s horse for a ride into town, where he was stopped by yet another mob of men looking for trouble.

The men accused him of being a horse thief, tied him to a tree, and whipped him to within an inch of his life. As he was being whipped, Murrieta blurted out that he had only borrowed the horse from his brother. Leaving the bloodied Murrieta behind, the marauders tracked his brother down and proceeded to lynch him in the town square as a horse thief.

Hate and violence was all-encompassing. Murrieta had witnessed his fellow Mexicans, natives to the land now swarming with Americans, being relentlessly persecuted. Both his wife and brother were brutally murdered. Joaquín vowed to fight back.

Murrieta formed a gang of Mexican men and Indians who had lost family members and property to the blood thirsty Americans. Furthermore, most of Murrieta’s gang, known as the banditti, had fought in the Mexican-American war. As the conquered people, they had an axe to grind with the victors, the Americans.

Most of the men were the same age or older than Joaquín but followed him as their leader due to his unquenchable desire for revenge and his unquestionable devotion to seeking justice for the Mexican people. 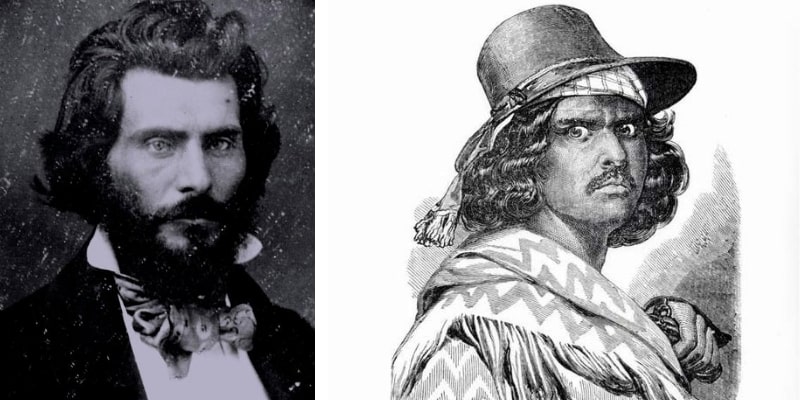 The gang stole horses and gold and murdered anyone who opposed them. Murrieta attracted colorful killers to his banditti, such as Three Fingered Jack, who once who chased a poor, ambling Chinaman with a knife just for giggles. As for Murrieta, while he tormented and killed Americans, the Mexican people viewed him as a kind and noble man.

After a successful raid, Murrieta would return to the villages of those that had been wronged by the American intruders, often returning their gold, horses, and valuables. But Murrieta was no Robin Hood, as his thirst for vengeance led him to rob and kill indiscriminately and without prejudice.

Word quickly spread that it was no longer safe for American miners and homesteaders to travel throughout the territory. On May 17, 1853, the governor of California signed a bill into law, commissioning a man named Harry Love to raise a band of no more than 20 men to capture, drive out, or exterminate the murderous bands of highwaymen terrorizing the country.

Love and his posse tirelessly stalked Murrieta and his gang. Careful reconnaissance led Love to a small encampment believed to be Murrieta’s. It was there that Love ambushed the unsuspecting gang with deadly precision.

Rummaging through the aftermath of the raid, Love identified the mutilated hand of Three Fingered Jack. Not too far from Three Finger Jack, lay the bullet-ridden body of another banditti.

Relying upon firsthand accounts of his appearance, Love was confident that he had killed the illusive Joaquín Murrieta. As proof of his conquest, Love cut off the heads of both Murrieta and Three Fingered Jack, along with Jack’s unmistakable hand, and pickled them in brandy.

Love, and the pickled head of Murrieta, would later tour the most populous cities in the new territory, where Love would charge $1 for curious onlookers to view the head of the famed Mexican banditti. 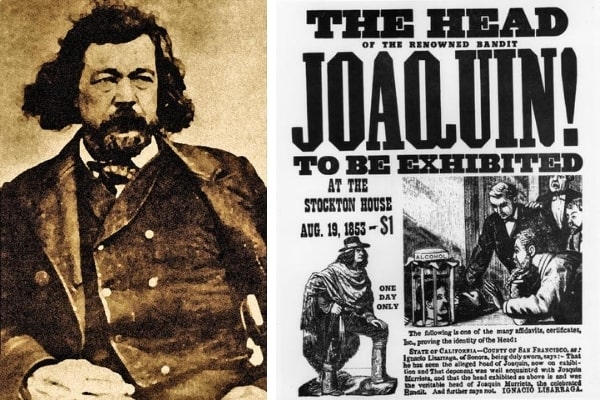 (Left) Harry Love. (Right) A poster advertising the display of the supposed head of Murrieta in Stockton, CA. 1853.

The name Joaquín Murrieta continues to live on as a symbol of resistance against oppression and injustice of the Mexican people. As recent as 2016, his story and symbolism were retold by filmmaker John J. Valadez in the documentary The Head of Joaquin Murrieta.

So, there you have it; from the pandemic, to masks, to Zorro, to Joaquín Murrieta. Social isolation and lack of oxygen from prolonged mask wearing have led this writer down some bizarre rabbit holes of curiosity. I sure hope you enjoyed our travels together.

Have our blog posts delivered straight to your inbox twice per month for free!
August 31, 2020/by Will Adams
https://relicrecord.com/wp-content/uploads/2020/08/Masks-Zorro-Joaquin-Murrieta.jpg 321 845 Will Adams /wp-content/uploads/2015/01/relic-record-logo-flat.png Will Adams2020-08-31 14:46:252020-08-31 14:48:13Masks, Zorro, and Joaquín Murrieta
Disclosure: RelicRecord.com participates in Amazon Services LLC Associates Program, and other affiliate advertising programs, designed to provide a means for publishers to earn fees by linking to Amazon.com and affiliated sites.

Get The Funk Out Of Here!
Scroll to top