As a metal detectorist, I often find buttons, thimbles, scissors, and other items related to clothing accessories or production. And from time-to-time, out pops a lead seal. For research purposes, the discovery of lead bale seals can help uncover the lost connections between North American colonial settlements and textile manufacturing in Europe.

Lead seals were affixed to goods to communicate information such as place of origin, manufacture, quality, size, circulation, and taxation. Lead seals are the colonial equivalent to today’s merchandise tag. Most commonly associated with textiles, lead seals marked everything from tobacco and salt to bundles of various trade goods. Easily molded, a lead seal was affixed to a bale of goods at its place of origin (typically somewhere in Europe) and remained unmolested until the goods reached their final destination.

An exceptional lead seal of the First Crusade possibly belonging to Richard of Salerno (c.1060-1114), Regent of the County of Edessa, one of the largest Crusader States. Image courtesy of Ancient Art & Numismatics.

The use of lead seals date back to the Roman period in which they were used to record the movement of various goods throughout the empire. Of particular interest to colonial North America, are seals dating from the 17th & 18th. When compared to our knowledge of buttons, gunflints, and ceramics of the same era, our understanding of seals is still in its infancy.

Understanding the origin, purpose, and age of a seal from the colonial era can be quite challenging. Most unearthed seals are severely fragmented or illegible, making it nearly impossible to know what they represent. And for those that are intact and legible, to understand their meanings, one would have to be trained in sigillography (the science and study of seals); or at minimum, have a solid understanding of crests and motifs that were common throughout Europe. Lastly, when lead seals are located, their quantities are limited due to the secondary use of the lead content for such things as the production of ammunition.

A Russian flax bale seal in which the obverse (left) indicates on the top line, ‘Flax Inspection’; the inspector’s name, ‘E:LEVOSHEV’ on the middle two lines; and on the bottom line ‘H50’, the post or station number where the inspection took place. On the reverse (right) the letters ‘NP’ indicate that the shipment was made via Port Narva on the Baltic coast; ‘AP’ the initials of the grower or agent, with ’12H’ signifying highest grade flax. 1794 was the year of inspection and shipment. Image courtesy of www,ukdfd.co.uk.

Lead seals that are recovered in colonial settlements, appear to originate from England, France, Germany, the Netherlands, Spain, Russia, and other European countries. The sites are typically associated with trade hubs, colonial habitations, or areas known for the production of clothing. Seals found in North America typically fall into one of two categories: fiscal or commercial.

A lead cloth seal of the 16th to mid 17th century. The seal bears the letter ’A’ and the pine cone heraldic badge of the southern German city of Augsburg. Augsburg was known for its production of ‘fustian’, a mixed linen-warp/cotton-weft fabric, which could be made with a silky finish and used as a substitute for velvet. Image courtesy of www.ukdfd.co.uk.

As the name suggests, inspection seals were used by quality control inspection offices across Europe. For example, the seal pictured below was “…applied by an inspector of the dyers’ guild in London. The arms of London are indicated by the sword within the crossed shield. The other side of the seal bears the word SEARCHED, which indicates that the cloth had been inspected. The letters W – AD probably stand for woad, a blue colored dye.” 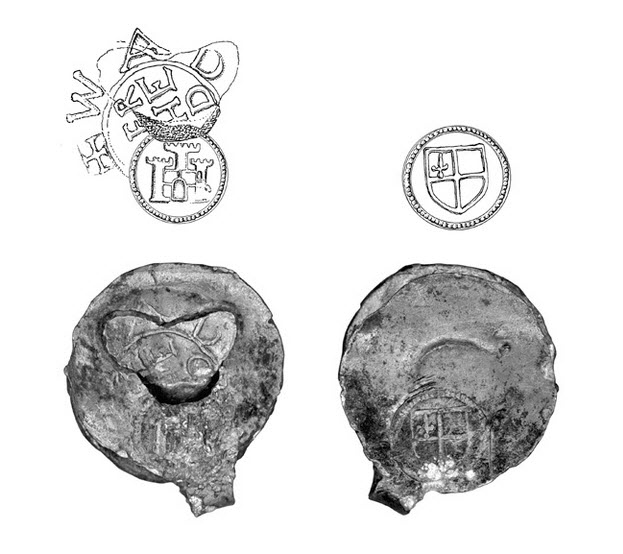 Seals remained attached to the cloth until the shipped goods were inspected and repackaged, or until the goods reached their final destination. Once the lead seal reached its final destination, it had fulfilled its purpose. Once removed, the seals became a discarded chunk of lead. Understanding that resourcefulness equated to survival in Colonial America, it’s expected that many seals were melted down to produce musket balls and other much needed objects.

Lead bale seals are fascinating artifacts that shed light on the important connections between Colonial America and Europe. They tell us what we imported, from who, and when. With a single artifact able to reveal that kind of information, I was surprised to find very little information about seals – especially those found in North America. It appears as if their study is still in its infancy within the archeological community.

For seals unearthed in the UK, there are several resources available for research purposes. The most comprehensive has to be the UK Detector Finds Database (UKDFD). Self-described as a “hobby-based” initiative, UKDFD provides an archival facility to help metal detectorists in the UK “record our heritage for future generations.” A quick search reveals more than 600 seals that have been photographed and documented for others to enjoy.

The Venomous Presidential Election of 1828