From the outset of the Civil War to the end of the century, no other publication did more to reflect and shape public opinion than Harper’s Weekly. Most notably, the journal carried the most extensive coverage of the Civil War and strongly influenced political discourse through its masterful illustrations, thought-provoking editorials, and scathing political cartoons.

The success of Harper & Brothers is largely attributed to Fletcher Harper, the youngest of the four brothers. Fletcher is credited with founding Harper’s Monthly (also known as Harper’s Magazine or Harper’s) in 1850. In fact, Harper’s is still in publication today, making it the second-oldest continuously published monthly magazine in the United States, with Scientific America being the oldest. Another interesting side note is that the first managing editor of Harper’s Monthly was Henry Raymond, who went on to help found and publish the New York Times. 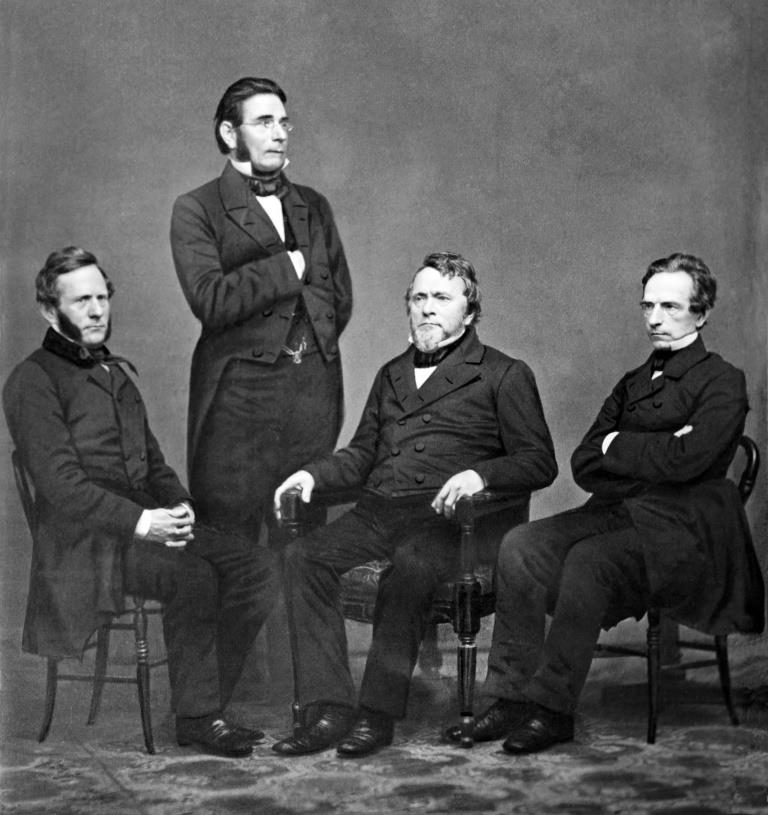 Building on the growing success of Harper’s Monthly, Fletcher went on to found Harper’s Weekly in 1857; and later, America’s first fashion magazine, Harper’s Bazaar in 1867 (published today by Hearst).

On January 3, 1857, the first issue of “Harper’s Weekly, A Journal of Civilization” was published. From its inception, until the outbreak of the Civil War, the journal took a moderate editorial stance on slavery and other hot-button issues of the day. A calculated business decision, the journal did so in order to preserve and grow its readership in the South. However, the journal’s position would radically change when the nation went to war in 1861.

With the arrival of the Civil War, came a shift in editorial positions. The publication began to embrace Lincoln, with its editorials calling for the preservation of the Union and its political cartoons favoring Lincoln and the Republican Party while vilifying Jefferson Davis and others in the South. Coverage of the war became central to the paper. Stories, battlefield reports, and illustrations kept soldiers and citizens up to date on every detail, on every front. In fact, the stories and images were so detailed that the Secretary of War, Edwin Stanton, tried to suspend its publication because the reports were aiding the enemy.

One of the biggest reasons for Harper’s Weekly rise in popularity and circulation, was Fletcher Harper’s leadership and his relationship with artist and political cartoonist Thomas Nast. Fletcher successfully recruited Nast from Frank Leslie’s Illustrated News to join the paper fulltime in 1862. From the beginning, Fletcher gave Nast tremendous editorial freedom. In turn, Nast drew fervent readership through his depiction of the war. 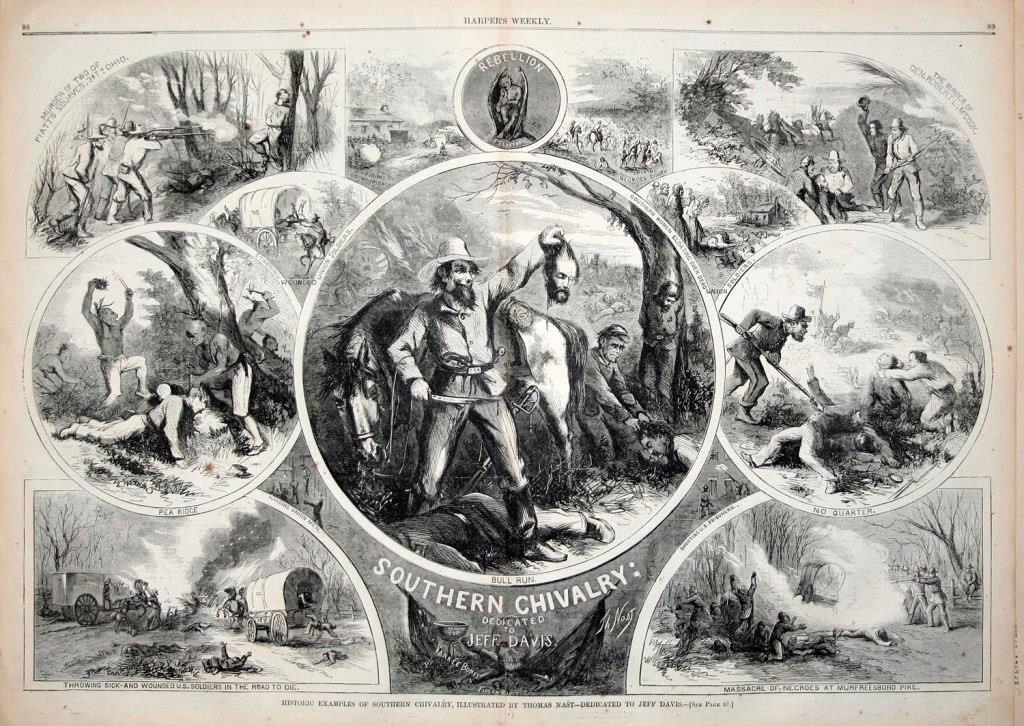 During the Civil War, Nast’s artwork portrayed Southerners as more than just an enemy, but rather a barbarous people who would rape, murder, and pillage their way to victory if not stopped. This theme is on full display in Nast’s illustration titled “Southern Chivalry: Dedicated to Jeff Davis” in which Southern soldiers are depicted as ruthless murderers.

One of his most recognized works is an illustration that helped stave off McClellan supports who wanted compromise with South during the 1864 presidential campaign. In “Compromise with the South,” Nast uses incendiary imagery to ignite passions in the North and to continue the fight. Approximately two months after the illustration is published, Lincoln is elected to his second term. 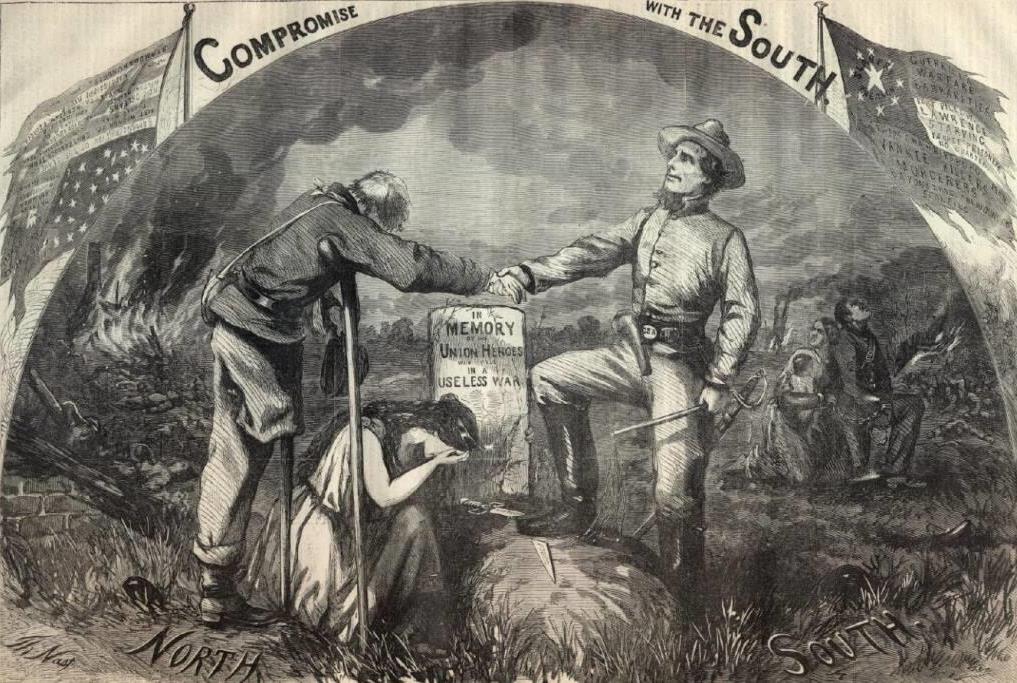 A Confederate soldier shakes the hand of a battered Union soldier while stepping on the grave of a fallen soldier as a black family remains in bondage.

Nast’s pro-Union and anti-slavery positions were recognized by President Lincoln. Near the close of the Civil War, Lincoln said “Thomas Nast has been our best recruiting agent. His emblematic cartoons have never failed to arouse enthusiasm and patriotism, and have always seemed to come just when these articles were becoming scarce.”

As for Harper’s Weekly war coverage, they too were recognized for their contributions. The following assessment of Harper’s Weekly coverage of the war was delivered by one of their peer publications; North American Review, in their April 1865 issue:

“Its vast circulation, deservedly secured and maintained by the excellence and variety of its illustrations of the scenes and events of the war, as well as by the spirit and tone of its editorials, has carried it far and wide. It has been read in city parlors, in the log hut of the pioneer, by every camp-fire of our armies, in the wards of our hospitals, in the trenches before Petersburg, and in the ruins of Charleston; and wherever it has gone, it has kindled a warmer glow of patriotism, it has nerved the hearts and strengthened the arms of the people, and it has done its full part in the furtherance of the great cause of the Union, Freedom, and the Law.”

After the war, Harper’s Weekly and its talented caricaturist, Thomas Nast, continued to be major factors in American politics. The publication continued its editorial support of the Republican Party and its divisive policy of Reconstruction. In fact, Thomas Nast is credited with the creation and popularization of the elephant as the symbol of the Republican Party. Through its editorials and Nast’s illustrations, the journal helped push Ulysses Grant to victory in the presidential elections of 1868 and 1872.

In a campaign led by Nast, the journal was also instrumental in helping bring down New York City political boss William “Boss” Tweed. Nast’s cartoons depicted Tweed as a corrupt, crass politician abusing his power for his own benefit. Responding to the power of Nast’s cartoons, Boss Tweed said, “Let’s stop those damned pictures. I don’t care so much what the papers write about me ― my constituents can’t read; but, damn it, they can see pictures.” 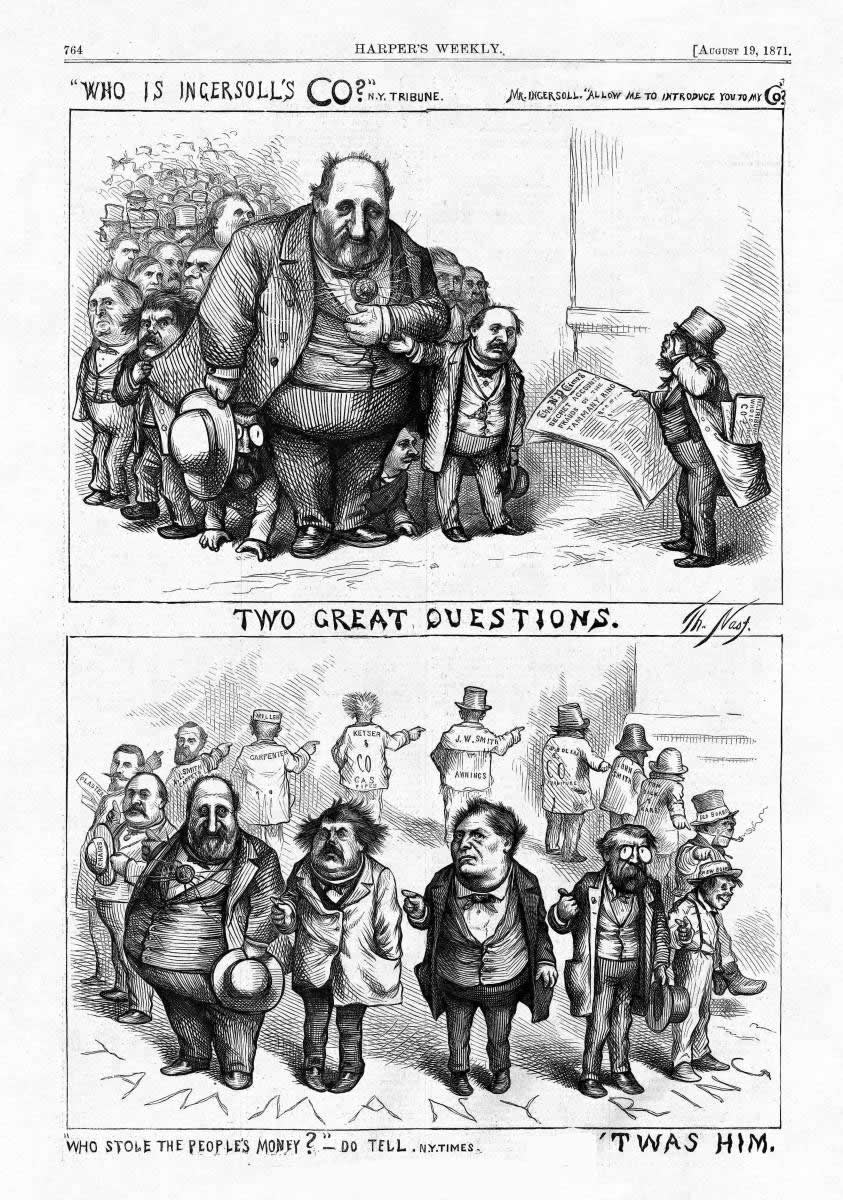 Thomas Nast’s putting the spotlight on Boss Tweed and his Tammany Hall cronies.

Nast’s cartoons managed to create enough smoke that it forced others to look for the fire. Two years after the first images appeared in the publication, Tweed was convicted of 204 of 220 counts of fraud related charges. He later died in prison.

A longtime supporter of the Republican Party, Nast flipped his allegiance and supported the Democratic Presidential candidate, Grover Cleveland in 1884. Yet again, Nast showed the power of political cartooning and helped shape public opinion of the Democratic candidate – enough so that Cleveland would become the first Democrat to be elected President since 1856.

It was only fitting that Nast’s final contribution to Harper’s Weekly was his Christmas illustration in December 1886. Although there were others of the period that sketched Santa Claus, Nast stands alone for his role in popularizing the modern image of Santa.  According to the New York Times, Nast “…contributed 33 Christmas drawings to Harper’s Weekly from 1863 through 1886, and Santa is seen or referenced in all but one.  Nast’s full-page illustration of Santa Claus in 1881 quickly attained status akin to an official portrait, and is still widely reproduced today.” 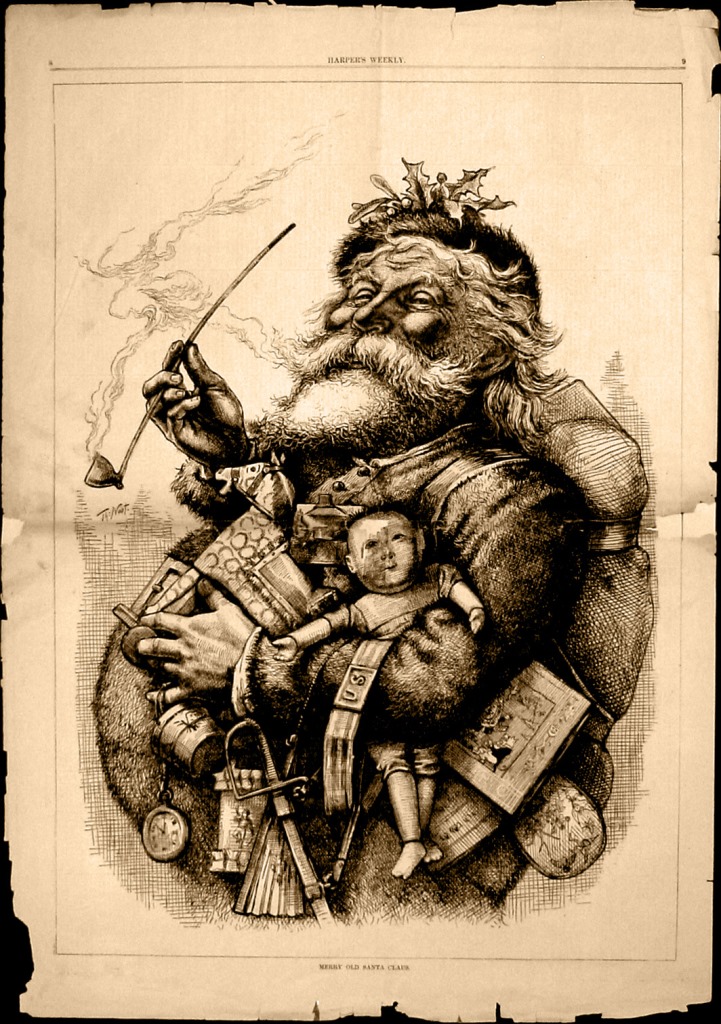 Following his departure from Harper’s Weekly, Nast’s cartooning style fell from popularity and so did the artist. Financial setbacks and medical issues plagued Nast until his death in 1902. Harper’s Weekly met its own fate on May 13, 1916 when it published its final issue.

Surviving prints of Harper’s Weekly offer something of interest to a wide array of collecting interests. And due to the circulation volume, finding affordable copies isn’t difficult. To view a digital archive of Harper’s Weekly, check out the University of Pennsylvania’s online archive.