Interwoven with the terrible carnage and historical significance of the Battle of Gettysburg (July 1-3, 1863), is the enduring legend that the Civil War’s most prolific battle was fought over shoes. On September 13, 1863, a little more than 10 weeks after the battle, Confederate General Henry Heth, whose Virginians were the first to engage the Union Army on July 1, filed his official report in which he explained why he ordered a detachment of his division into Gettysburg.

“On the morning of June 30,” Heth wrote, “I ordered Brigadier-General [Johnston] Pettigrew to take his brigade to Gettysburg, search the town for army supplies (shoes especially), and return the same day.” Heth continued, “On reaching the suburbs of Gettysburg, General Pettigrew found a large force of cavalry near the town, supported by an infantry force. Under these circumstances, he did not deem it advisable to enter the town, and returned, as directed, to Cashtown. The result of General Pettigrew’s observations was reported to Lieutenant-General [A.P.] Hill, who reached Cash-town on the evening of the 30th.”

While it was rumored that the small Pennsylvania town had a cache of shoes, General Heth was aware that Jubal A. Early’s men had previously besieged the town just 5 days earlier. When Early’s division of Ewell’s Second Corps arrived in Gettysburg on Friday, June 26, they demanded a ransom of $10,000 in cash plus supplies, including shoes. In the end, Early left nearly empty-handed as most of the supplies had already been relocated to more secure locations away from Gettysburg.

In his report, General Heth stated that on the morning of July 1, Lieutenant General A.P. Hill ordered Heth’s division, along with William Pegram’s battalion of artillery, to move at 5 a.m. in the direction of Gettysburg. Heth’s mission: “…to feel the enemy; to make a forced reconnaissance and determine in what force the enemy were — whether or not he was massing his forces on Gettysburg.” 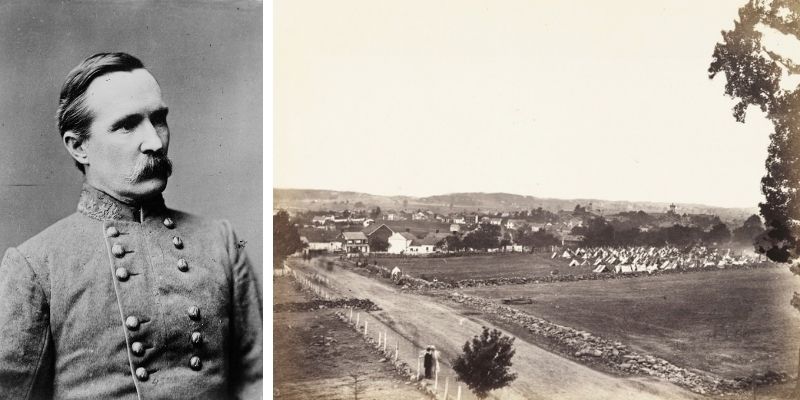 Heth was not however, ordered to start a battle. Although Confederate General Robert E. Lee had ordered that any unnecessary contact with the enemy was to be avoided, the Virginian started one anyway, beginning the Battle of Gettysburg.

A Storyline Too Good To Ignore

The intrigue and allure of a such a monumental battle having been started on accident, over shoes, has been too good of a story for writers to ignore. In framing a pivotal scene in The Civil War: A Narrative (1963) in which A. P. Hill haughtily dismissed the idea that the Army of the Potomac was in Gettysburg, author Shelby Foote writes that Heth was quick to agree with Hill. “If there is no objection,” Heth said, “I will take my division tomorrow and go to Gettysburg and get those shoes.” “None in the world,” Hill replied.

In the aftermath of the three-day Battle of Gettysburg, as many as 51,000 soldiers from both armies are killed, wounded, captured, or missing. Robert E. Lee’s Army of Northern Virginia suffered inconceivable casualties; 3,903 killed, 18,735 wounded, and 5,425 missing and captured. Of these, an estimated 6,957 Confederate soldiers fell into Union hands, including several high-ranking Confederate officers. 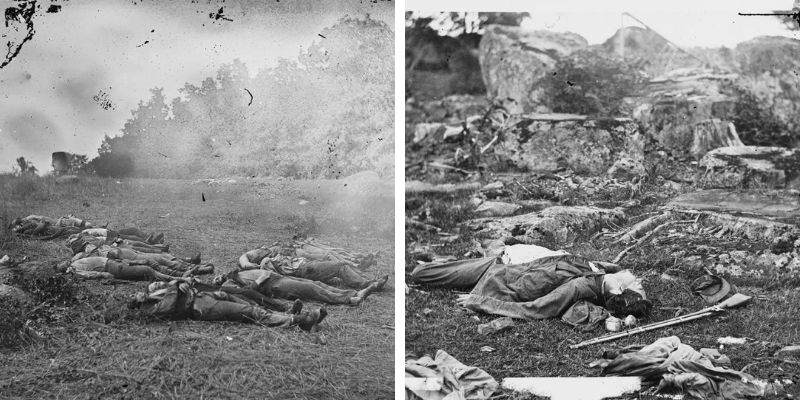 In one of the most iconic photographs of the Civil War, “Three Johnnie Reb Prisoners”, likely from Louisiana, pose for Mathew Brady on Seminary Ridge following the battle. While widely accepted as one of the most famous images of the Civil War, its subjects, their accoutrements, and the date in which the image was captured, have been long been debated among historians, authors, and Civil War history enthusiasts alike. 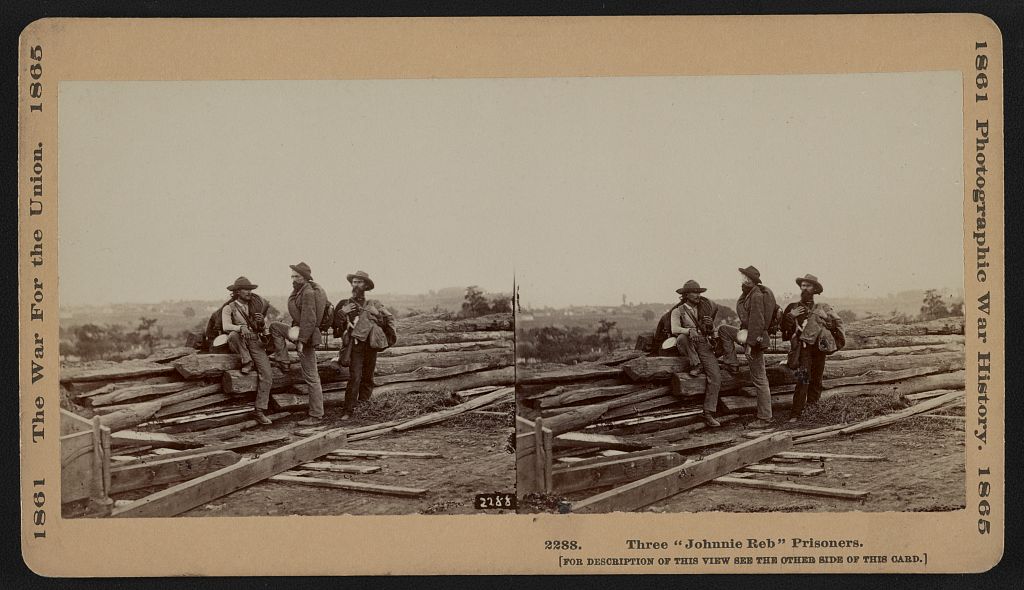 Photo shows three Confederate prisoners on Seminary Ridge, on or about July 15, 1863, with the town of Gettysburg, Pa., in the background. Brady, Mathew B., approximately 1823-1896, photographer.

According to photographic historian William A. Frassanito’s Gettysburg a Journey in Time, page 71, the photo, in the Library of Congress holdings, was taken by Brady on or about July 15, 1863, at Seminary Ridge, the same day Brady is believed to have photographed the headquarters of General Lee.

Frassanito notes that on July 16, 1863, 2,500 Confederate prisoners were shipped out from Gettysburg towards Washington D.C., where they were later incarcerated in Northern prisons. If the date of July 15 is accurate, the photograph was taken nearly two weeks after the battle.

Considering this timeline, and the fact that none of the soldiers appear to be wounded, Frassanito contends that they were likely “stragglers, captured during Union mop-up operations somewhere along either the Chambersburg Pike or Hagerstown Road, [General Robert E.] Lee’s main routes of retreat.”

Meanwhile, a closer look at the soldiers reveals a much better dressed and equipped Confederate soldier than tradition would have it. They are not the ragged, barefooted, and poorly equipped individuals that history has depicted the Southern soldier to be. If this is an accurate representation of the troops within the Army of Northern Virginia at the time of Gettysburg, then why would General Heth have descended upon the town in search of shoes? 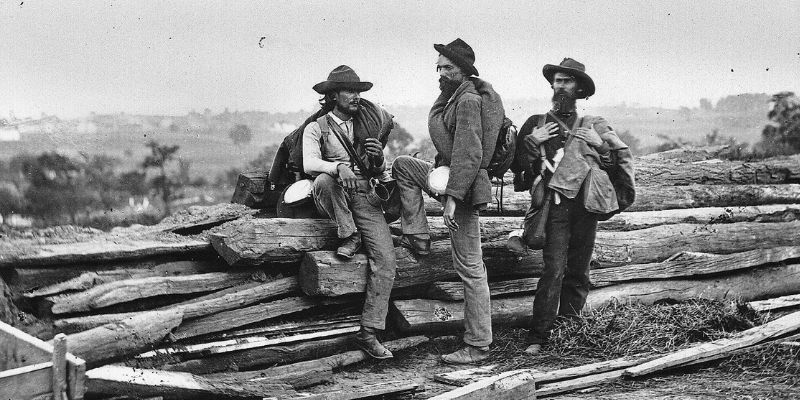 It is certainly possible that these soldiers scoured the battlefield to gather as many supplies as they could carry prior to their departure to Northern prison camps. There’s also the possibility that these men were given additional accoutrements and posed by Brady to create a certain narrative for the image; something Civil War photographers have been accused of doing.

One such narrative that has accompanied this photograph, is the romantic view of the chivalrous Southern soldier. A man rigorously bound to his idealistic and determined resolve to fight for what he thought was right.

RELATED ARTICLE: The War Between the Beards

In The Civil War: A Film By Ken Burns, historian Shelby Foote looked beyond the soldiers’ uniforms and accoutrements and into their defiant glare and proud posture. “You see something in his attitude toward the camera that’s revealing of his nature,” Foote told the filmmaker Ken Burns, “as if he is having his picture made but he’s determined to be the individual that he is.”

In the video below, Shelby Foote comments on the iconic image in the opening minute of The Civil War, A Ken Burns Film, Episode 5.

Based on what little history has revealed to us, we are left to put the pieces together ourselves. Were these men cowardly deserters scooped up and posed by an opportunistic commercial wartime photographer, or were they gallant soldiers, captured, and photographed in all their defiant glory before boarding a train for a Northern prison camp?

5 months after the Battle of Gettysburg, President Lincoln used the dedication ceremony of the Gettysburg’s Soldiers’ National Cemetery to honor the fallen and reaffirm the purpose of the war in his historic Gettysburg Address:

The world will little note, nor long remember what we say here, but it can never forget what they did here. It is for us the living, rather, to be dedicated here to the unfinished work which they who fought here have thus far so nobly advanced.

Wow. Now That Was Fun.
0 replies