Dug up, buried, mined, quarried. Yes. Sign me up.

Rooted in Latin, the word ‘fossil’ stems from ‘fossus’, meaning, “having been dug, buried, mined, or quarried.” Fossils are rocks; more specifically, the petrified remains of ancient organisms. Fossilization is the process by which those remains become fossils.

Most organisms quickly succumb to decomposition following their death, making fossilization quite rare. For an organism to be fossilized, its remains must be rapidly buried beneath a blanket of sediment, lava, or sticky resin soon after its death. Rapid burial is critical to the process of fossilization as it shields the remains from the biological processes that destroy an organism’s remains. Over time—10,000 years or more—minerals seep into the remains, turning them into rock.

Fossilized bones, teeth, petrified wood, shells, and insects in amber are classified as Body Fossils. Such fossils help us learn more about the appearance of ancient organisms. Trace Fossils, as their name suggests, are rocks that have preserved some form of biological activity such as a footprint or an arthropod burrow. Trace Fossils help us understand how ancient organisms moved and operated within their habitats.

Fossils provide evidence about life on Earth millions, or even billions, of years ago, along with clues about how early organisms lived. Fossils, and where they’re found, can also tell us how the Earth has changed.

Take ammonites for example, these mollusks once swam in the open water of ancient seas, yet their fossilized remains have been found buried within the rocks of the Himalayas. Such discoveries tell us that the rocks of Earth’s highest mountain peaks were once at the bottom of the ocean.

Here is an infographic illustrating the process by which an ancient organism’s remains become fossilized. 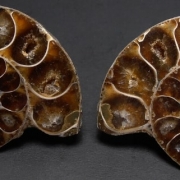 What Makes Ammonites So Beautiful?
0 replies