Do you collect or deal in coins, currency, art, fossils, pottery, stamps, or old-world relics? Come to think of it, do you collect anything of moderate to significant monetary value? If so, caveat emptor “let the buyer beware!”

These hobbies, and many more like them, are facing a formidable; if not insurmountable threat. And it’s one that may surprise you. It’s not time, the elements, inflation, scarcity, or development; it’s China! China and its flourishing counterfeiting industry crowded with factories pumping out “replicas” of just about anything imaginable. Yes – even fossils.

Counterfeiting is as old as money itself – which dates to the minting of coinage in the Greek city of Lydia around 600 B.C. It’s so old; it’s been coined as the world’s second oldest profession. Second only to… well, you know. So it shouldn’t come as a surprise that Chinese counterfeiters have aggressively attacked the global coin market, pumping it full of fake bullion coins like the American Eagle.

The flood of counterfeit coins into the U.S. market; and for that matter, world markets, has seemingly gone unchecked. For one, the Chinese government allows and promotes the counterfeiting industry to operate undeterred. Heck, China even had a museum filled with nothing but fakes! To exasperate the issue, counterfeiters no longer rely on large shipping containers to ship their fraudulent cargo, making it nearly impossible for Customs to intercept. So how does this stuff make its way into the US and other markets?

In the past few years, counterfeiters have leveraged the web and online marketplaces to market their fraudulent wares, namely a Chinese e-commerce company Alibaba (think Chinese Amazon) and its subsidiaries such as AliExpress. That Chinese powerhouse is the easiest, most secure way to buy counterfeit items in bulk. Don’t believe me? Just do a simple search for replica Silver Eagles on AliExpress. Scary, right? 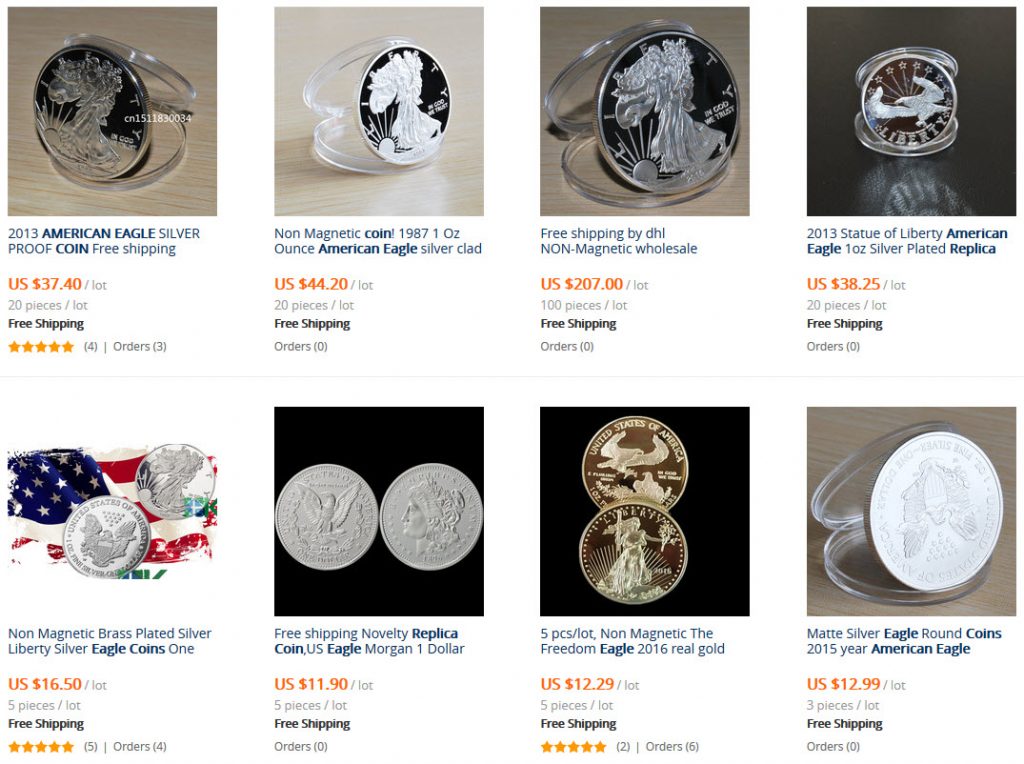 A quick glimpse at a few of the “replica” American Eagle coins offered on AliExpress.com.

This ease of access has allowed “black marketers” to freely shop for the best deal on “replica” coins and have them shipped directly to their house or P.O. Box. From there, the fakes are marketed and sold as authentic bullion coins to unsuspecting collectors who snatch up the knockoffs on sites such as eBay and Amazon – which has its own Chinese problem by the way.

As technology improves, so do the fakes. So much so that counterfeit coins pass through the hands of even the most savvy coin collectors and dealers. The counterfeiting operations operate as a de facto Chinese mint. They will take an image of the coin they want to replicate, use a graphics program to convert the image into a format that an engraving machine can accept, and then cut a die that can be used over and over again. With the rapid advancement of 3D printing technology, this process will become even more precise. 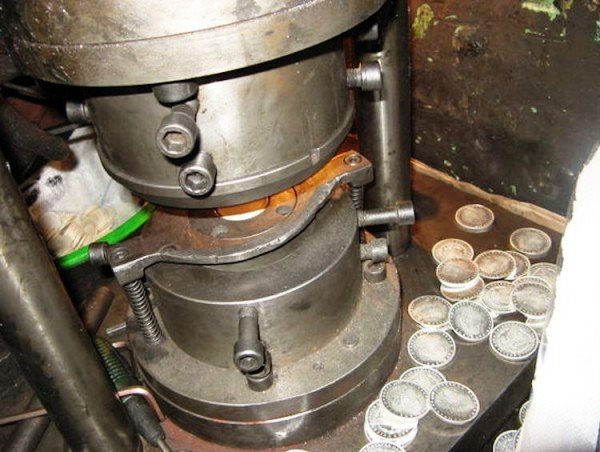 Once the dies have been cast, the “mint” will use inexpensive base metals, like tungsten, to create the coin. To complete the process, the coin will then be plated with either gold or silver, depending on the coin being replicated. The best “mint” shops will produce coins that weigh-in at the correct weight for the coin; and if plated correctly, will even pass the acid test used in the verification process of gold coins.

To get a front row seat to this process, check out coin expert, Susan Headley’s gallery Inside a Chinese Coin Counterfeiting Ring on About.com.

Like most criminal enterprises, these counterfeiters do everything in their power to perfect their craft in order to avoid detection. In the coin world, this means simulating coin slabs. A slabbed coin has long been the standard bearer for authentication and certified grading of a coin. A coin slab is simply a hard plastic, tamper-proof case that protects a coin which has been authenticated and graded by a certified professional grading service. 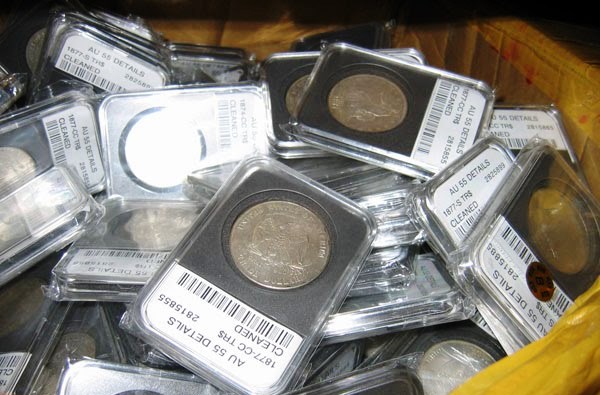 You guessed it; these counterfeiters are now “slabbing” their fakes! They package their replica coins in real-looking (but fake) “tamper-proof” cases, along with fake barcodes and registration numbers. So I guess that makes it a fake, fake? To the unsuspecting or untrained eye, they pass as legitimately graded coins. That said, there is a simple way to prevent getting burned by this scam. If you’re not sure about a slabbed coin, contact the grading company and ask them to verify the registration number prior to purchase.

Chances are, if you collect long enough, you’ll get burned. It happens to the best of us (including this author). While it’s always fun to poke around the web, antique malls, and shows for a deal, I would suggest finding a few reputable dealers to do business with and stick with them.

Most of the dealers I work with have been in business for at least 20-years and guarantee everything they sell. And if there’s ever a legitimate issue with a purchase (spending all of your grocery money isn’t a legitimate issue), they will give me my money back, no questions asked. While I know that I’m paying a mark-up (these guys run a business after all) on everything I buy, I’m okay with it. I just look at the additional cost as insurance.