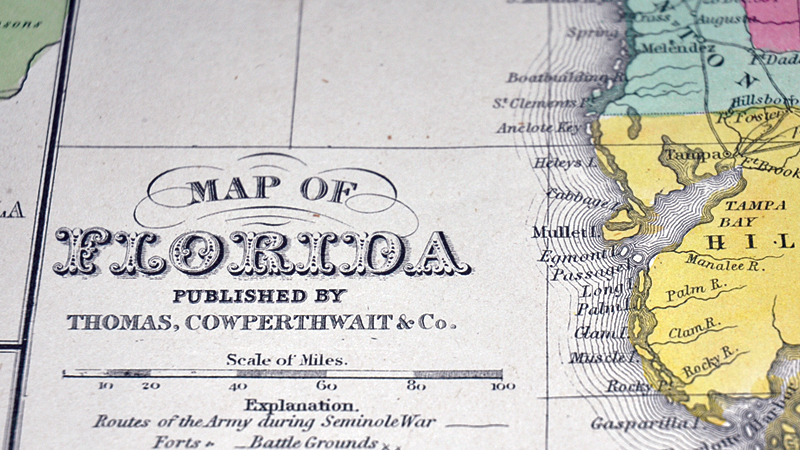 Last weekend I spent some time with Ray Hunt, a collector of Florida maps and postcards to learn more about his collection and what led him to collecting. I’ve had the pleasure of knowing Ray, his wife Linda, and their sons, Brad and Bryan for over two decades now. I was in school and Boy Scouts with Bryan but it was only later in life when Ray hired me to work for him that I learned about Ray’s collection of historic maps and postcards of Florida. Since Will and I started a company offering software for collectors, it was only fitting I spend some time with Ray learning more about what he collects. END_OF_DOCUMENT_TOKEN_TO_BE_REPLACED

At the outbreak of the Civil War in 1861, hundreds of little people from Aquidneck, a small isolated island in the Atlantic Ocean, enlisted in the Union Army. Some joined ordinary—that is, non-little people—regiments, but others formed an all-dwarf voluntary infantry: the 13th Rhode Island Infantry Regiment, organized at Providence, RI. This regiment would form the core of what would come to be called the Dwarf Brigade.

END_OF_DOCUMENT_TOKEN_TO_BE_REPLACED

“The Victory Girls are on the loose and soon will cook some poor guy’s goose. The G.I. Joes must be more wary of the diseases they may carry. Venereal disease is on the rise – so take your pros; be well and wise!” After all, “98% of all procurable women have venereal disease. Why bet against these odds?”

END_OF_DOCUMENT_TOKEN_TO_BE_REPLACED

Political memorabilia offers collectors a fascinating glimpse into the evolution of the United States and its politics from years past. Buttons, ribbons, medals, flags, glassware, and every imaginable material in-between, was made to carry the images and slogans of political parties and their candidates.

END_OF_DOCUMENT_TOKEN_TO_BE_REPLACED

Anita Holcombe of American Digger Magazine recently shared her story of recovering a Jeff Davis Hat Pin from a Civil War site in Belle Plains, Virginia. With Anita’s help, we explore the hat pin, its origins, and the purpose it served. Let’s first start with a little background on where the hat pin was recovered.

END_OF_DOCUMENT_TOKEN_TO_BE_REPLACED

If you’re a millennial, let me explain: A stamp is like a sticky paper thing with a fancy design on it that you put on an envelope so the person who drives that funny looking white truck/jeep with the eagle on it while dressed in a Cub Scout uniform will pick it up and take […]

“Colonel Woodward did not weigh more than 110 lbs, had long curling hair flowing over his shoulders. His very small legs were stuck in high cavalry boots reaching above his knees; and on which, was an enormous pair of Mexican spurs. He had a cavalry saber that was much too long for him and an army pistol attached to his belt; which contrasted with his size, looked like a small cannon. His grey pantaloons were stuffed in his boot, while a dark grey hunting shirt with a narrow brimmed corduroy slouch hat completed his apparel. All this, with an extremely dust-begrimed face, made a picture ridiculously amusing.”

END_OF_DOCUMENT_TOKEN_TO_BE_REPLACED

We recently attended the American Digger Magazine Civil War Relic Show & Sale, in Mt. Pleasant, SC. While publishers Butch and Anita were busy managing the show and greeting visitors, we were fortunate enough to be entrusted with running their merchandise table. In addition to meeting the many fans of the magazine, we also had the opportunity to see some amazing Civil War relics and American history. Here are a few highlights.

END_OF_DOCUMENT_TOKEN_TO_BE_REPLACED

After waking up from sweet dreams of finding a CSA (Confederate States of America) plate (buckle or accoutrement), Butch Holcombe set out with his metal detector to explore a site in North Georgia that saw action during the Civil War. It was 1973, a time in which finding Civil War artifacts was much more prevalent than it is today – especially those rare relics that are coveted by collectors both then and now.