In 1723, at age 17, Benjamin Franklin arrived in Philadelphia – the same year that Pennsylvania first issued its colonial paper money. Upon arrival, Franklin bore witness to a city in distress – an obvious lack of permanent residents, vacant houses, and anemic economic activity.

He attributed these issues to the lack of gold and silver coins on hand. Prior to Pennsylvania’s decision to print its own paper currency, the colony had exchanged its coinage for goods purchased from Europe. Once the coinage left the colony, the inhabitants had very little left to conduct local trade with, bringing the local economy to a screeching halt.

Pennsylvania, like other colonies, directly issued their own paper money. Called “bills of credit”, the colonial money was not backed by gold or silver. Instead, it was backed by land assets. Colonial governments used their paper money to pay for government expenses, while Colonial subjects used the money as a mortgage; providing their land as collateral. 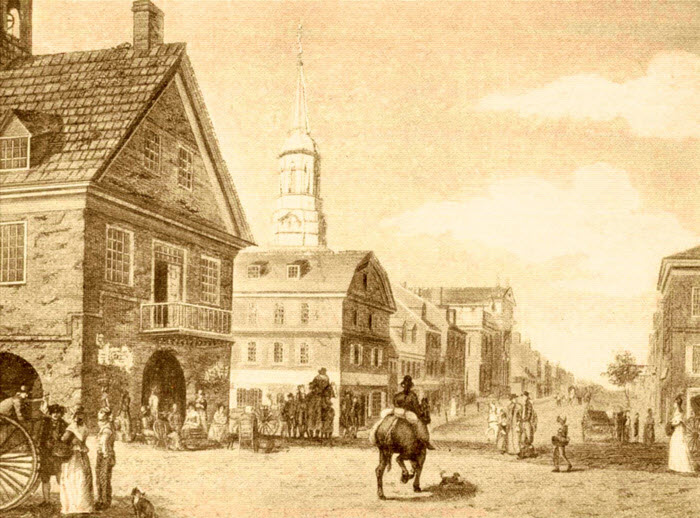 Second Street, Philadelphia, 1723. Showing the Old Court House on the left. After leaving Boston, Ben Franklin entered the city on this street on a Sunday morning. He was 17, tired and hungry and had one dollar in his pocket.

After Pennsylvania’s paper money began to flow, Franklin observed an uptick in local trade, employment, construction, and an influx in new, permanent residents. These observations made a dramatic impact on the young and impressionable Franklin. His on-the-ground experiences, and the lessons he took from them, set Franklin in motion to forever change how the world thinks about, and uses paper currency.

By the spring of 1724, Franklin had surrounded himself with others who had a yearning for reading, writing, debate, and new business ventures. When a letter written by Franklin ended up in the hands of the Pennsylvania Governor, Sir William Keith, the Governor was quite impressed by Franklin’s intellect and promise. He quickly befriended Franklin and urged him to establish his own business in Philadelphia.

Following the Governor’s suggestion, Franklin went to Boston to raise the necessary capital needed to start his business. Franklin returned to Philadelphia emptyhanded, having failed to secure the funding. Learning of his failure to raise money, Governor Keith offered to fund Franklin’s business and directed him to go to London to purchase printing equipment for the new venture.

He ensured Franklin that the necessary documentation and letter of credit needed to make the purchase would be sent along with him on the boat. However, upon his arrival, Franklin discovered that the Governor had failed to produce the letters, stranding Franklin in London with very little cash and no credit.

While in England, Franklin was befriended by Thomas Denham, a successful Philadelphia merchant. Denham tells Franklin that the Governor has broken his promises and abandoned him. He encouraged Franklin to get to work. And that he did.

Short on cash and unable to return home, Franklin took jobs in printing shops where he learned the latest skills and techniques in printing technology. Mentoring him along the way, Denham offered Franklin a job when he returned to America. 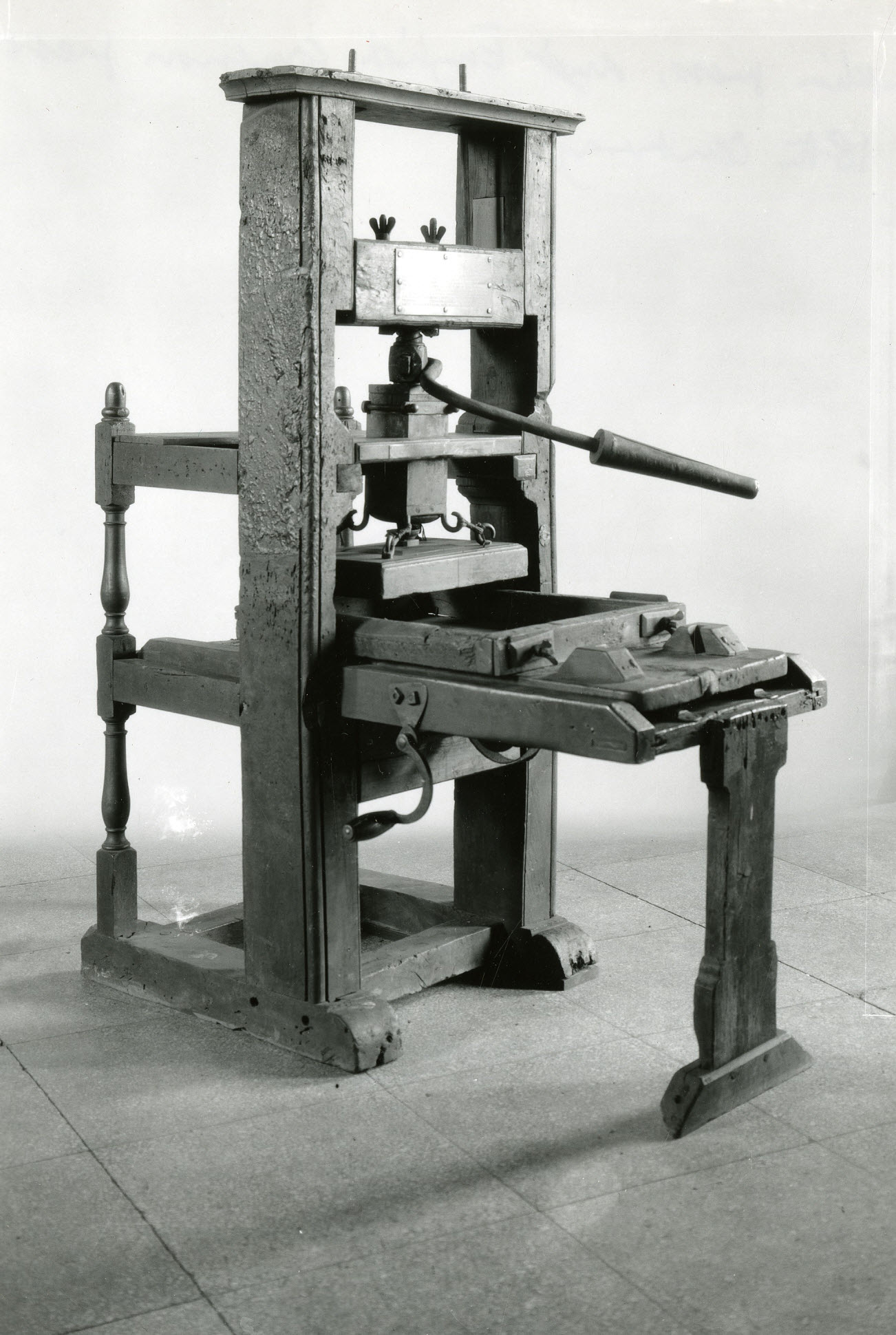 The Franklin Printing Press, an English common press, from the Historic Relics Collection. In 1768, Benjamin Franklin visited the printing company in London where he had apprenticed in the 1720s. Franklin purportedly took a turn at this press, although he had not operated a press when he worked there. The press was then deemed so historically valuable that it was purchased and transported to the United States, where it went on display in the Patent Office Building and later went to the Smithsonian as the “Franklin Press.” Source: Smithsonian Institution Archives.

In 1726, after 2.5 months at sea, Franklin arrived at Philadelphia. He immediately went to work for Denham, working as his shopkeeper and bookkeeper. It’s during this time that Franklin learned how to run a business and also honed his ability to sell.

In 1727, both Franklin and Denham fell ill, with the later succumbing to illness and passing away. Along with the death of his mentor, Franklin suddenly found himself out of employment.

The Beginning of a Publishing Empire

On the search for employment, Franklin took his newfound business acumen and cutting-edge printing skills and went to work for Samuel Keimer, the founder of The Pennsylvania Gazette. One of the first projects assigned to Franklin was the printing of New Jersey money. The project called for the use of the latest in printing technology, skills that only Franklin possessed.

Never one for idleness, in 1727 Franklin started the “Junto” – a member-based club that provided a structured form of mutual improvement. Members debated and discussed topics of morals, politics, philosophy, and business. One of the members, Hugh Meredith, was a farmer and co-worker of Franklin’s at Keimer’s Printing Shop – and future business partner.

In 1728, Franklin and Meredith entered into a partnership, opening their own print shop on a loan from Meredith’s father. Their printing equipment was imported from England, with Franklin’s printing skills used as collateral, with all profits shared equally.

Franklin attacked the businesses with vigor, while Meredith took to idleness and the bottle. As an obvious impediment to business growth, Franklin bought-out Meredith and became the sole owner. 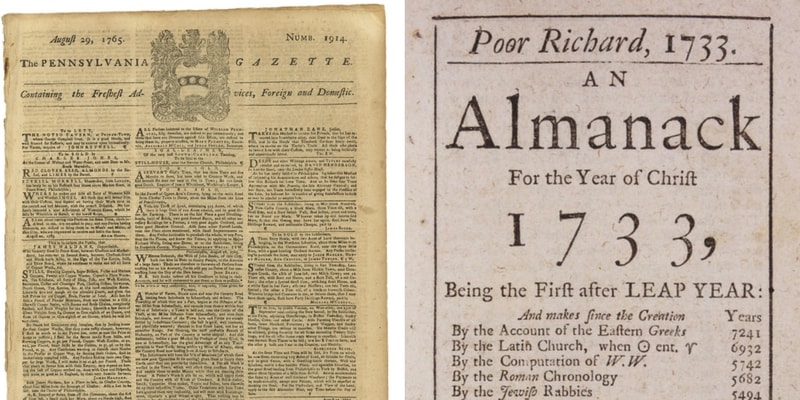 Looking to expand his business, on October 2, 1729, Franklin jumped at the opportunity to purchase The Pennsylvania Gazette from his debt-ridden former boss, Samuel Keimer. Under Franklin’s control, The Gazette grew to become the most successful newspaper in all of the colonies. Soon thereafter, Franklin introduced another hit: Poor Richard’s Almanack, published continuously from 1732 to 1758.

Making the Case for Paper Money

While Franklin was busy growing his publishing empire,  he continued to keep a watchful eye on colonial paper currency. He was especially mindful of that fact that the paper money issued in 1723 by Pennsylvania was set to expire in 1731.

In 1729, the wealthy elite aggressively lobbied to cease the continuation of paper money out of fear that it may depreciate as it had done in South Carolina and New England. They urged the legislature to return to gold and silver coins as the official currency of the Pennsylvania colony.

Taking note of the political discussions, Franklin took the subject to the Junto for debate and discussion. Franklin argued in favor of continuing the issuance of paper money. The Junto discussion inspired Franklin to anonymously author and publish a pamphlet: “A Modest Enquiry into the Necessity of a Paper Currency.”

The pamphlet quickly spread throughout the colony and was strongly embraced by the commoners– the rich hated it. Due to Franklin’s powerful written argument and persuasion, the wealthy elite were unable to offer an equally persuasive rebuttal. Franklin’s arguments won the day, and the paper money bill passed.

To expand his business beyond Philadelphia, he trained and developed his employees to run their own print shops. Once an employee was sufficiently trained, Franklin would secure a facility, pay the rent, and provide the equipment in exchange for one-third of the profits for a term of 6 years. At the end of the 6-year agreement, his partner had the option to purchase the equipment from Franklin or maintain the current agreement.

While Franklin was spinning off print shops, he made another brilliant deal when he invited the Scottish journeyman printer, David Hall, to join his printing firm in 1743. As Franklin became more engaged in other interests and public affairs, he made Hall a partner in 1748. Hall maintained the printing firm, Franklin and Hall, while also editing and publishing the Pennsylvania Gazette and Poor Richard’s Almanack. 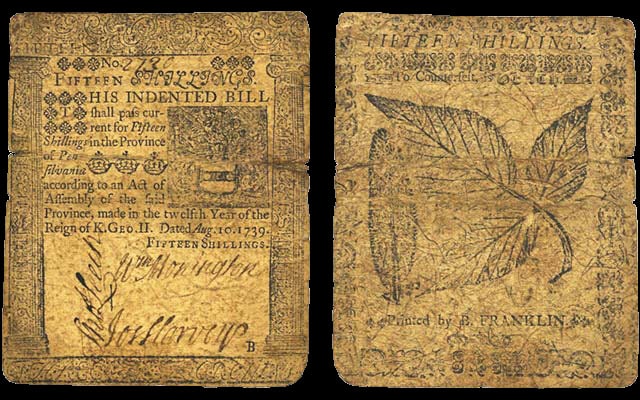 Benjamin Franklin printed this Aug. 10, 1739, Pennsylvania bill. The words “Printed by B. Franklin” are on the back, under the leaf imprints.

In 1749, Franklin and Hall won the contract to once again print Pennsylvania’s paper money – which they printed from 1749 through 1764. In 1766, Franklin sold his share in the business to Hall. Hall later brought William Sellers, another journeyman printer, into the firm to form the Hall and Sellers firm. 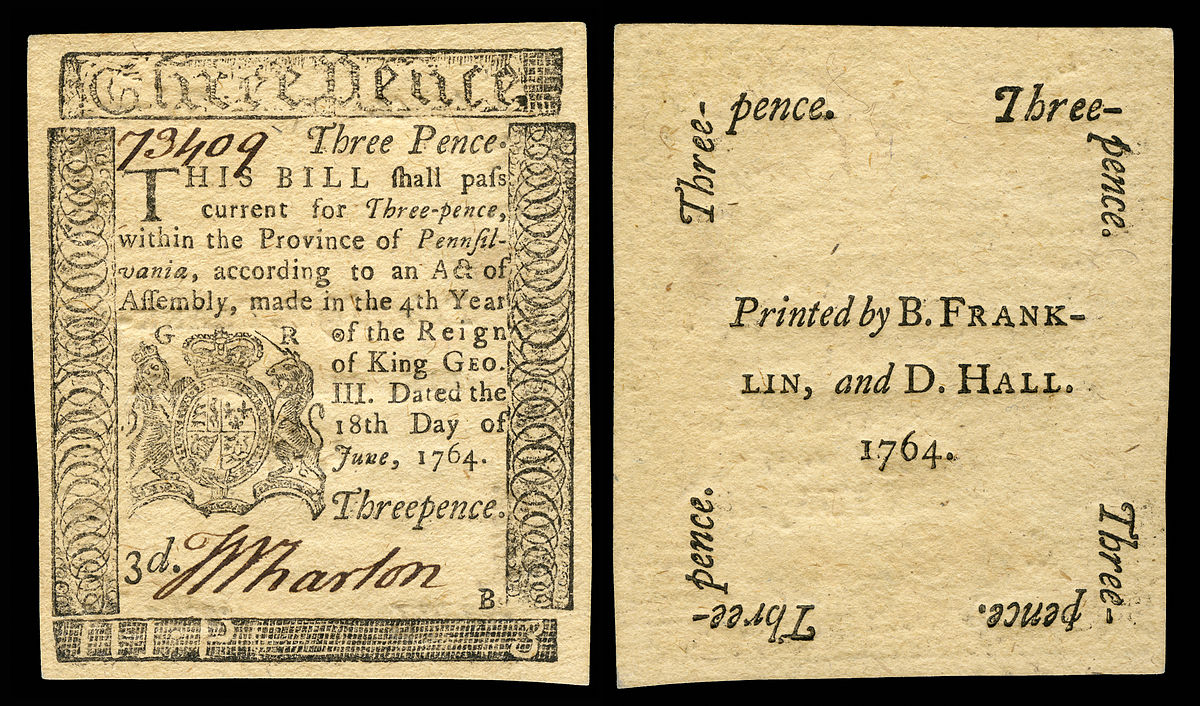 Obverse and reverse of a three pence note of paper currency issued by the Province of Pennsylvania and printed by Benjamin Franklin and David Hall in 1764. 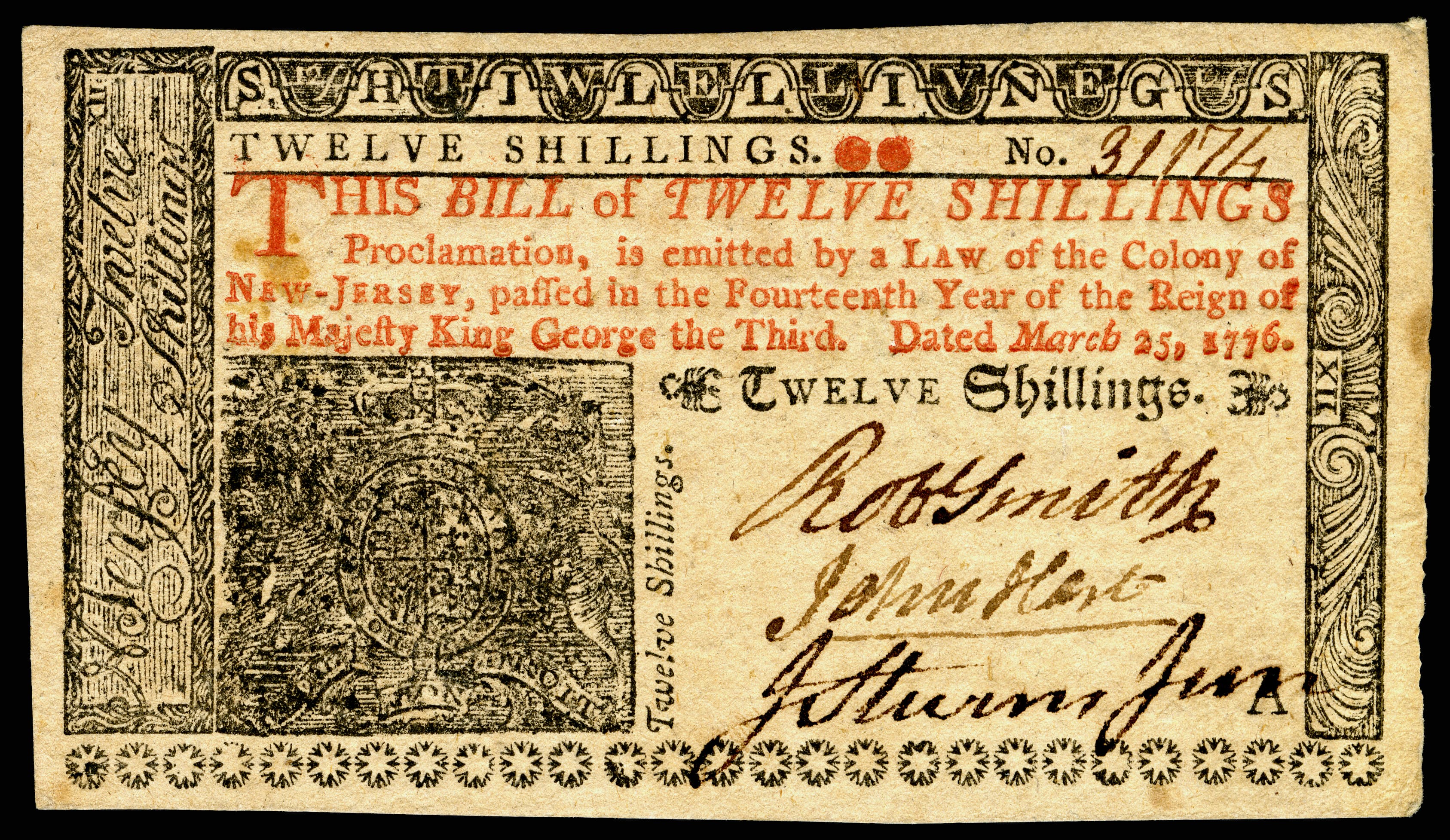 A 12s colonial currency from the Province of New Jersey. Signed by Robert Smith, John Hart, and John Stevens, Jr.

On April 17, 1790, at age 84, Franklin dies from a pleuritic attack at his home in Philadelphia. Less than a year later, on February 25, 1791, The First Bank’s charter was drafted by congress and signed by George Washington – signaling the first effort to create centralized banking and the creation of a national bank paper currency under the new United States Constitution.

So as you can see, paper money really is all about the Benjamin’s!