Political memorabilia offers collectors a fascinating glimpse into the evolution of the United States and its politics from years past. Buttons, ribbons, medals, flags, glassware, and every imaginable material in-between, was made to carry the images and slogans of political parties and their candidates.

Collecting political memorabilia from America’s past can be traced to the first presidential inauguration of George Washington. To commemorate the event, clothing buttons were produced with the president’s initials, GW, and slogans such as “Long Live the President” were stamped into metal – made mostly of gold-plated copper and pewter. 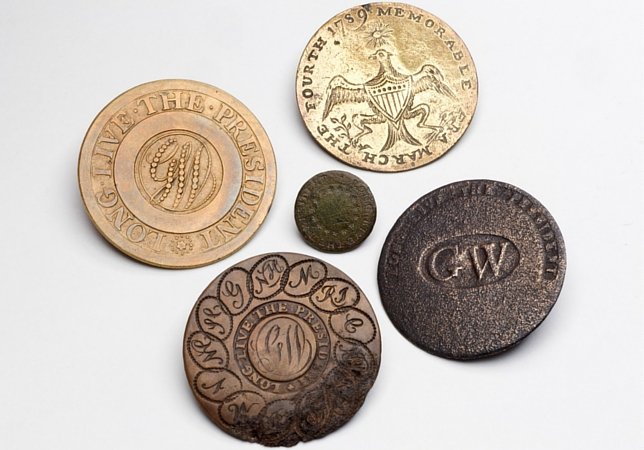 Since that time, political campaigns have been quick to use any material that could convey the image of a candidate and his/her agenda.

Some collectors focus on a specific time period, candidate, or political party, while others may choose to focus on a particular advertising material such as buttons or ribbons. Let’s take a look at a few of the more popular types of items people collect.

Versatile, portable, and relatively inexpensive to produce, buttons have long been a favorite choice of political campaigners. Due to the variety of buttons available, they are also a favorite of many collectors. Early style buttons typically showcased a candidate’s image enclosed in a metal frame. As designs, materials, and manufacturing processes changed, slogans were added to compliment a candidate’s image or simply replaced an image altogether.

Some of the more memorable buttons were not those worn in support of a particular candidate, but those that were used to trash an opposing candidate. Yes, I know it’s hard to believe but politics have always been nasty. Don’t believe me; check out some of the meanest U.S. political campaign buttons ever made.

Also widely popular among collectors, are items from political conventions. Some of the more common items available in today’s collectible market are paper collectibles, such as event tickets and programs. More closely akin to political buttons, and rarer to find, are delegate ribbons and medals. 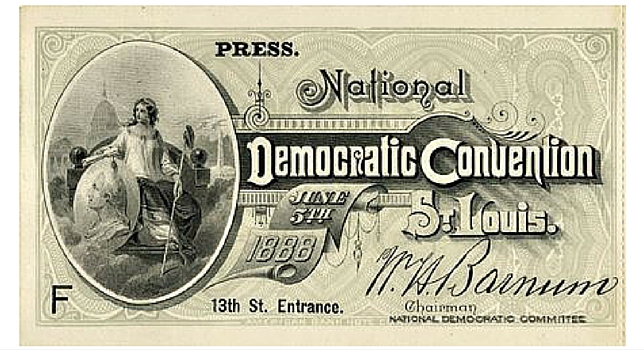 The first Democratic National Convention was held in 1832, and the first Republican National Convention was held in 1856. As one might assume, the general rule of thumb is that the older the ticket, the more collectible it is. Convention tickets have a similar collectible appeal that currency has in that they come in a variety of patriotic motifs, color, and size. In addition, tickets from the same convention may differ based on the seating designation.

In American politics, nothing sells like the American flag. Long ago, politicians figured out that if they were to put their names or slogans on the flag, they would be viewed as the patriotic candidate! In most instances, the flag design was slightly altered to set it apart from the traditional flag.

The popularity of using the American flag in political advertising was popularized during the William Henry Harrison’s presidential campaign of 1840, and reached its climax of popularity during Abraham Lincoln’s candidacy of 1860.

Campaign flags of the presidential campaign of 1860.

Political flags are arguably the most sought after political memorabilia by today’s collector. If a collector desires to own this type of political history, they better be ready to pony up some cash! Much of the value associated with a flag is its rarity. The driving force behind the scarcity of these flags was an Executive Order of President Taft dated June 24, 1912, which forbade alterations of the American flag – effectively putting an end to the use of an altered flag in political advertising.

When we say “China”, we’re not talking about the stuff in Grandma’s cupboard! We’re talking Presidential China – the stuff special ordered by presidents for use in the presidential home. There are very few private collections today that possess more than one or two pieces of China. With scarcity like that, one can only imagine the price a measly ole’ saucer might bring at auction!

Left to Right: Presidential China from the Jackson, Washington, and Harrison presidencies.

Although the first official “State” China was ordered for President James Monroe (1817-1825), earlier presidents purchased their own china for entertaining guests. One of the primary reasons for the scarcity of Presidential China is due to the common practice of destroying old china when new sets were ordered.

Prior to the invention of the telephone; and the telegraph before that, letters were the primary form of communication. As such, hand written letters, signed orders, and other forms of written correspondence provide additional insight into a political figure or time in history. 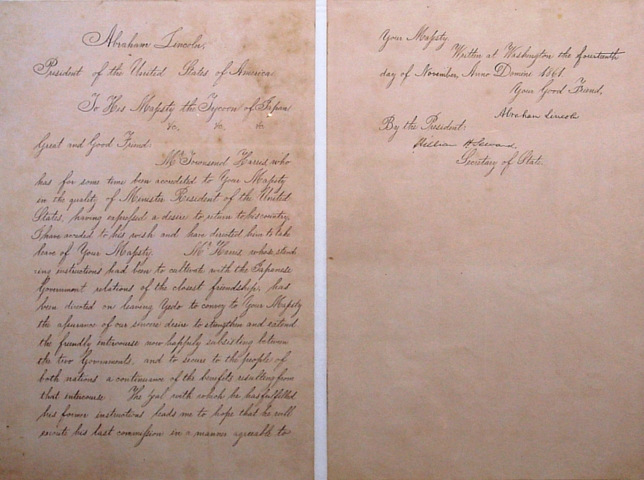 Finding signed documents available for purchase is not all that difficult. The majority of signed documents available on the collectible market are rather mundane by nature. Most are associated with government or military orders, receipts for goods and services, or other run of the mill functions that required the signature of a person in a leadership position. However, such documents present a collector with an opportunity to possess authentic signatures from some of the most influential figures in America’s history.

Every item will have its own unique characteristics that drive its collectible value (real or intrinsic). As a general guide, there are 6 factors that drive the value of political memorabilia – age, condition, significance, provenance, rarity, and market demand.

To help you value the items in your collection, or to get an idea of what something is worth on today’s market, check out these tremendous resources:

American Political Items Collectors: a non-profit membership organization, dedicated to promoting the collection, preservation and study of materials relating to political campaigns and the presidency.

PoliticalMemorabilia.com: in addition to being a terrific resource for research and reference purposes, one can also buy and sell political memorabilia through the site and its auctions.

Have our blog posts delivered straight to your inbox twice per month for free!
February 26, 2016/by Will Adams
https://relicrecord.com/wp-content/uploads/2016/02/American-Political-Memorabilia.jpg 425 853 Will Adams /wp-content/uploads/2015/01/relic-record-logo-flat.png Will Adams2016-02-26 14:11:092016-02-26 14:11:09American Political Memorabilia
Disclosure: RelicRecord.com participates in Amazon Services LLC Associates Program, and other affiliate advertising programs, designed to provide a means for publishers to earn fees by linking to Amazon.com and affiliated sites.