Proudly standing before a full-length mirror, he tugged on the ends of his jacket, adjusted his sweat stained collar, and repositioned his blue kepi. Taking a seat as instructed, he straightened his back and stared intently into the photographer’s peculiar contraption, careful not to move. In the still and silent moments that followed, he solemnly reflected on his life.

The resulting photograph, rediscovered more than 150 years later, captures the proud, yet troubled eyes of a Civil War soldier staring headlong into his future, while still grappling with his past.

Some time ago, I came across this photograph, and two others, being sold as a collection: two sixth-plate sized tintypes and one sixth-plate earlier ambrotype. Hidden behind each photograph, on the inside of their respective ornate thermoplastic cases, the name “Jacobs” was neatly inscribed by hand. Believed to be a family name by the previous caretaker, it had been used to presumptively identify the soldier as Allen Jacobs, 34th Iowa Volunteer Infantry, Company A.

Intrigued by the prospect of learning more about the lives of those pictured, I purchased the collection. Considering the soldier was the best place to start my research, my initial inquiry focused on him; more specifically, his kepi.

Upon careful examination, a brass letter “A” is seen neatly pinned to the top-center of the soldier’s kepi. Directly beneath the “A”, the numbers “34” are affixed to the kepi. Along with the style and tone of the uniform, the letter and numbers indicate that the soldier served in the Union Army; in Company A, of the 34th Regiment. 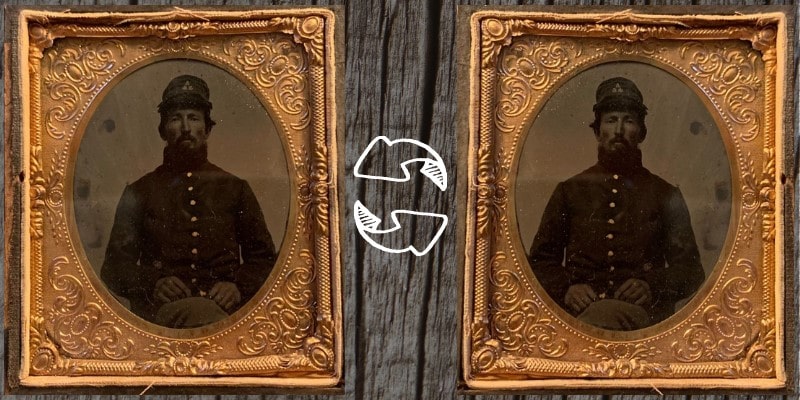 The image was photographed and then flipped to make the letter and numbers on the soldier’s kepi more legible.

With this information in hand, I turned to the National Park Service’s Civil War Soldiers and Sailors Database, where I initiated a search based on two quires: Jacobs and 34th Regiment. The search results returned 10 soldiers belonging to a 34th Regiment, with 7 of those associated with the Union Army. Of those 7 soldiers, there was only one that served in a “Company A”:

With confirmation of the soldier’s identity, I turned my focus to learning more about Jacobs’ wartime experiences.

The 34th Iowa Volunteer Infantry was raised in south central Iowa, with Company K recruits mostly drawn from Lucas County, Iowa. The primary recruiter in Lucas County was one of its most prominent citizens, and lawyer, Warren S. Dungan. In recognition of his recruiting chops, Dungan was awarded the rank of Captain, Co. K. 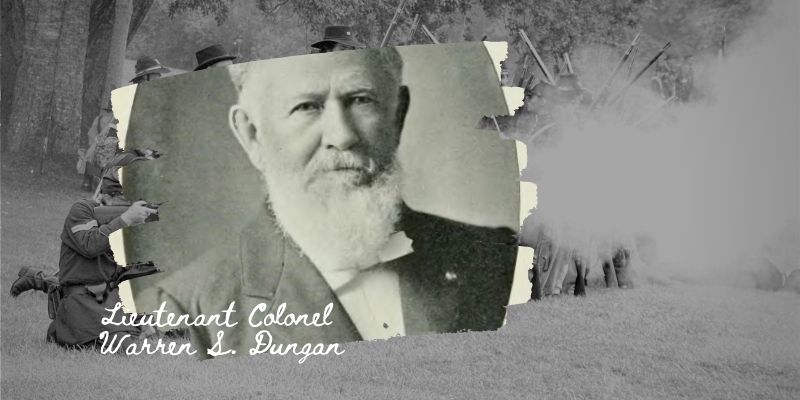 Portrait of Lieutenant Colonel Warren S. Dungan (c1903) featured in History of Iowa From the Earliest Times to the Beginning of the Twentieth Century.

When the regiment gathered at Camp Lauman, in Burlington, Iowa, in the fall of 1862, Dungan was appointed to Lieutenant Colonel and given a regimental command position; a position he held until the end of the war. Allen Jacobs would enlist the following winter, mustering into Company K, on Dec. 19, 1863.

By November 1864, the ranks of the 34th had diminished to about half of what was needed to field a full regiment and fresh recruits were not readily forthcoming. As a result, on Nov. 12, 1864, the 34th was consolidated into a battalion of five companies: A, B, C, D, and E. Company K ceased to exist, and Jacobs was absorbed into Co. A.

In his 1 year, 7 months, and 27 days of service, Jacobs, and the men of the 34th Iowa Infantry, covered a tremendous amount of ground. They participated in everything from mundane guard duty and construction projects to violent clashes with a fiercely determined enemy.

Jacobs likely joined the 34th on Matagorda Island, Texas, in December 1863. From that point forward, the 34th Iowa Infantry participated in the following engagements:

While Jacobs’ wartime experiences surely contributed to the solemn expression seen in the photograph, a nagging interest in learning more about Jacobs continued to persist. That persistence led me to the Lucas Countyan blog, and the truly talented author and historian behind it, Mr. Frank D. Myers.

To record the early history of Lucas County, Mr. Thomas M. Dunshee, of English Township, wrote to Allen Jacobs of Athol, Kansas, asking Jacobs to recall his earliest memories of Lucas County. Jacobs responded to Mr. Dunshee’s inquiry by letter, dated Sep. 6, 1904. In turn, the correspondence was published in the Nov. 24, 1904 edition of The Chariton Leader.

In the letter, which I encourage you to read here, Jacobs reminisced about John Ballard and his sprawling family, encounters with Indians, the arrival of new settlers, the first harvests of timothy and wheat, and most interestingly, Jacobs marriage to John Ballard’s third daughter.

Believing that Ballard’s third daughter could be the young woman pictured in two of the three photographs that I acquired, I asked Mr. Myers if he had any more information pertaining to Jacobs and his wife. He did not disappoint.

Mr. Myers pointed me in the direction of two more letters, both of which are carefully archived in the Lucas County Historical Society collection. The first, dated Nov. 30, 1904, was written by Jacobs to his old Lieutenant Colonel, Warren S. Dungan, in which Jacobs discloses his wife’s name, Minerva (Ballard) Jacobs. The second is more of an affidavit than a letter and was obtained from Minerva by LTC Dungan in 1905, when the Jacobs were visiting relatives in Derby, Iowa. 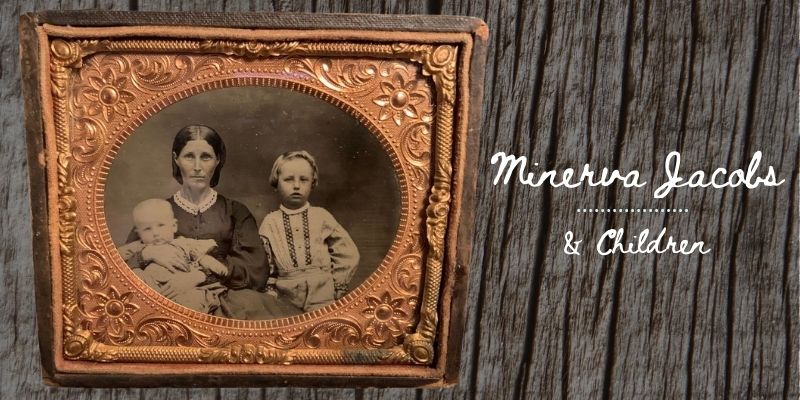 Minerva (Ballard) Jacobs pictured with what are presumed to be two of her children.

Allen and Minerva reportedly had 10 children, two of which died before the age of two. One, Sarah E. Jacobs, died in April 1863, a mere 8 months before Allen was mustered into the Union Army. The tragic loss of Sarah, coupled with his traumatic war-torn experiences, must have been contemplated as Allen stared into the lens of the photographer’s camera.

In our final correspondence, Mr. Myers shared a photo of Allen and Minerva, most likely taken in the first few years of the 1900’s. Allen and Minerva are seated front and center, with their oldest child, Hannah, at left in the first row; the only other person identified in the photograph. 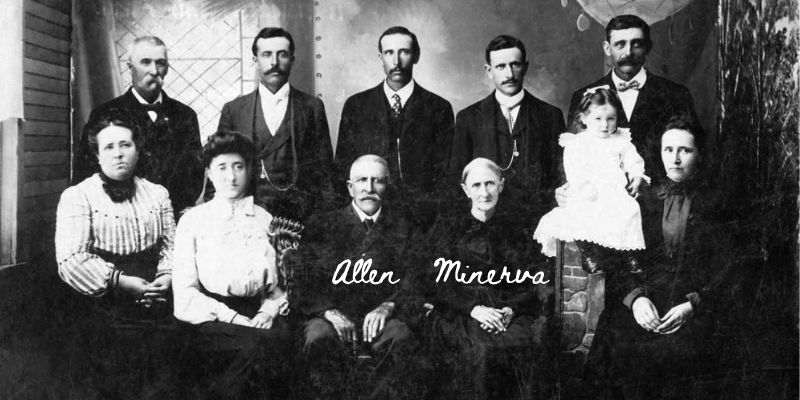 Allen and Minerva are seated front and center, with their oldest child, Hannah, at left in the first row; the only other person identified in the photograph.

To remove any doubt that Allen and Minerva had been rediscovered, I created various photographic comparisons of the “young” Allen and Minerva with the “old”. As seen in the images below, the match was conclusive, especially when it comes to Minerva. 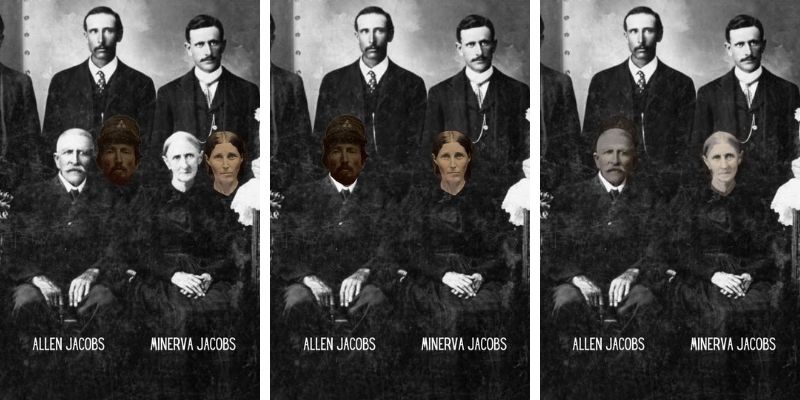 The “young” faces of Allen and Minerva are overlaid on the “old” faces of the Jacobs.

As I continued to study the face of Allen, pictured in his Union blues, I could not shake the feeling of sadness his expression gave me. His eyes seemed to reflect the sorrows of his past, but also of his future. A future that would end abruptly some 46 years later.

On March 5th, 1911, at age 76, Allen took his own life. The account of his tragic demise was splashed across the pages of the Smith County Pioneer, the paper of Smith Centre, Kansas, in a column titled “AGED MAN COMMITS SUICIDE. Allen Jacobs a Victim of Self Destruction. Worry Over Illness the Cause.”

The column went on to say, in part, “Allen Jacobs, old soldier, early settler and seventy-six years old, committed suicide at his home a few miles northwest of Gaylord in Harvey township, last Sunday, by shooting himself through the head.” 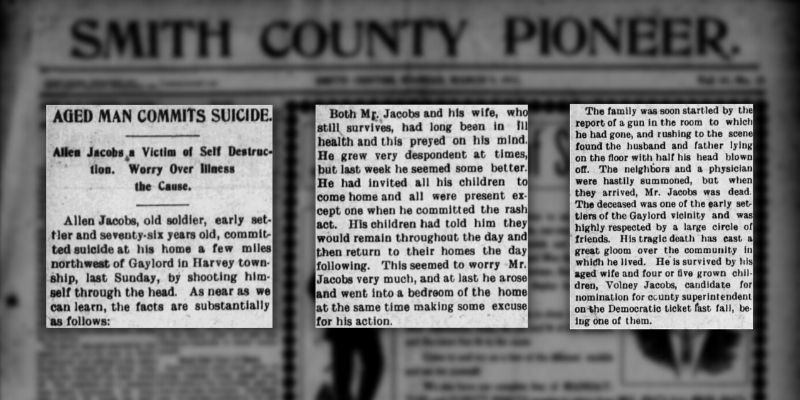 Several weeks later, the Smith County Pioneer implored its readers not to cast judgment upon Jacobs, declaring “Allen Jacobs, an old resident of Smith county, had grippe (old-fashioned term for the flu) and neuralgia all at once, so he took down the shot gun, placed the muzzle at his head and killed himself. If you have never had grippe and neuralgia together, you’d better with-hold criticism.”

His widowed wife, Minerva, died on Dec. 16, 1920, at age 83. In the same paper that reported her husband’s death nearly 10 years prior, it informed its readers of Minerva’s passing, “Mrs. Minerva Jacobs died at the home of her daughter, Mrs. Hannah Hobbick last Monday. She has been an invalid for about three years.”

While Allen Jacobs’ story has been written, the journey of rediscovering some of it, and the intrigue of learning more about it, morphed into a story in and of itself.

Of the nearly three million men that fought in the Civil War, and the estimated 750,000 that died in battle, by disease, and other causes, most were just like Allen Jacobs. They too have stories that were written long ago; stories that deserve to be rediscovered and shared again.

A special thanks to Frank D. Myers for his vast knowledge, determined research, and willingness to share it with others.