Back in the late 1920’s a little girl’s love for dolls began to take shape and at age five she taught herself how to make their clothes. The first Shirley Temple doll came out in 1934 but Ruth’s family didn’t have money to spend on store-bought toys. Her father died in 1929 leaving his wife and three children struggling to live on a very meager income out in the country. One day while playing with a neighbor, Ruth asked the child if she could hold her Shirley Temple doll. The child’s hurtful response became the catalyst for what would become a passion for doll collecting later in Ruth’s life. Ruth’s mother, emotionally fragile and caring for three young children alone, had suffered a nervous breakdown and the neighbor child didn’t want someone with a “crazy” mother playing with her doll. 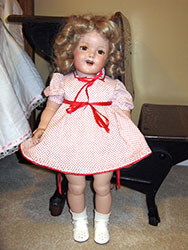 Shirley Temple and her movies came along at a time when our country was in the middle of the Great Depression (1929-1939), and she became a symbol of wholesome family entertainment. After consulting with the Temple family and making a prototype, Ideal Novelty and Toy Company patented the first Shirley Temple doll in October 1934. The composition doll was adorned with a red polka dot dress like the one Shirley Temple wore in “Stand Up and Cheer”. Up to this point bisque (unglazed tinted porcelain) had been the prevalent doll material but Ideal began using a composition which is a mixture of sawdust and glue. It could be molded and painted and was more durable than bisque. 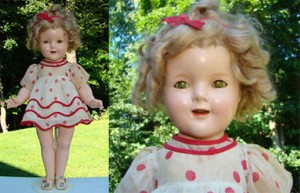 Even without the social media outlets we have today, the Shirley Temple doll became vastly well-known and desired. Perhaps the reason the dolls were so popular with mothers and daughters alike is that they represented brightness during a very dark period in the nation’s history. Nine different sizes of the doll were made and soon a variety of outfits were designed based on Miss Temple’s film roles. At $3.00 each even the smallest of the dolls were not cheap. Today an original Shirley Temple doll can be worth anywhere from $200 with no original clothing to $2000 in mint condition.

The little girl was my mother and in 1991 she asked me to spend a few days helping her catalog the collection. By the time we were done, approximately 500 dolls had been accounted for and listed by name, maker, year, and cost. Each doll also had a numbered tag that corresponded to the list. After Mama’s death in 1999, and per her instructions, my sister and I drew numbers to determine which dolls we would inherit; but the collection remained in our parents’ home until our father passed away in 2010.

Each time I look at her dolls now displayed in my home I am reminded of the joy and pleasure they gave my mother and how she turned a long ago hurt into something positive.